Kazakhstan’s Jews, who ‘steer clear’ of politics, are sitting out their country’s bloody unrest

(JTA) — The Jewish community of Almaty, the largest city in Kazakhstan, has shut down its activities as most of its members hunker down in their homes amid a wave of bloody protests.

Dozens of protesters and 18 police officers have been killed in the violence, which began Sunday and prompted a Russia-led coalition of states to deploy troops to the central Asian nation.

The protests began over an increase in the price of fuel but have become more broadly directed against the autocratic rule of President Kassym-Jomart Tokayev. Rioters have torched the facade of the presidential palace and looted stores throughout Almaty, where most of Kazakhstan’s Jews live.

Yeshaya Cohen, the chief rabbi of Kazakhstan who is affiliated with the Chabad-Lubavitch movement, said that the country’s Jews are sitting out the conflict, both physically and politically, by staying indoors “until the forces maintaining order stabilize the situation,” he told the Jewish Telegraphic Agency on Friday.

There are eight synagogues in Kazakhstan, of which at least three host activities weekly or daily. All have suspended their activities so as not to endanger congregants, Cohen said. But funerals, of which there was one Friday, and other urgent activities are taking place. Jews and their property have not been harmed in the unrest, according to Cohen.

The Beit Menachem synagogue and Jewish community center, Almaty’s largest Jewish hub, is situated outside the city center, which “probably plays in favor of the community,” said Russian Chief Rabbi Berel Lazar, as most of the violence is happening in the center.

Zeev Levin, head of the Bukharian Jews research unit at Jerusalem’s Yad Ben Zvi Institute and an expert on Central Asia, said the risk of attacks on Jews or Jewish heritage sites in Almaty throughout the ongoing unrest is low to nonexistent. Rates of antisemitism during peacetime are also traditionally low in Kazakhstan.

”Even throughout the most vicious of civil wars that have ripped Central Asian republics in recent decades, Jewish heritage sites were largely left alone,” Levin said. 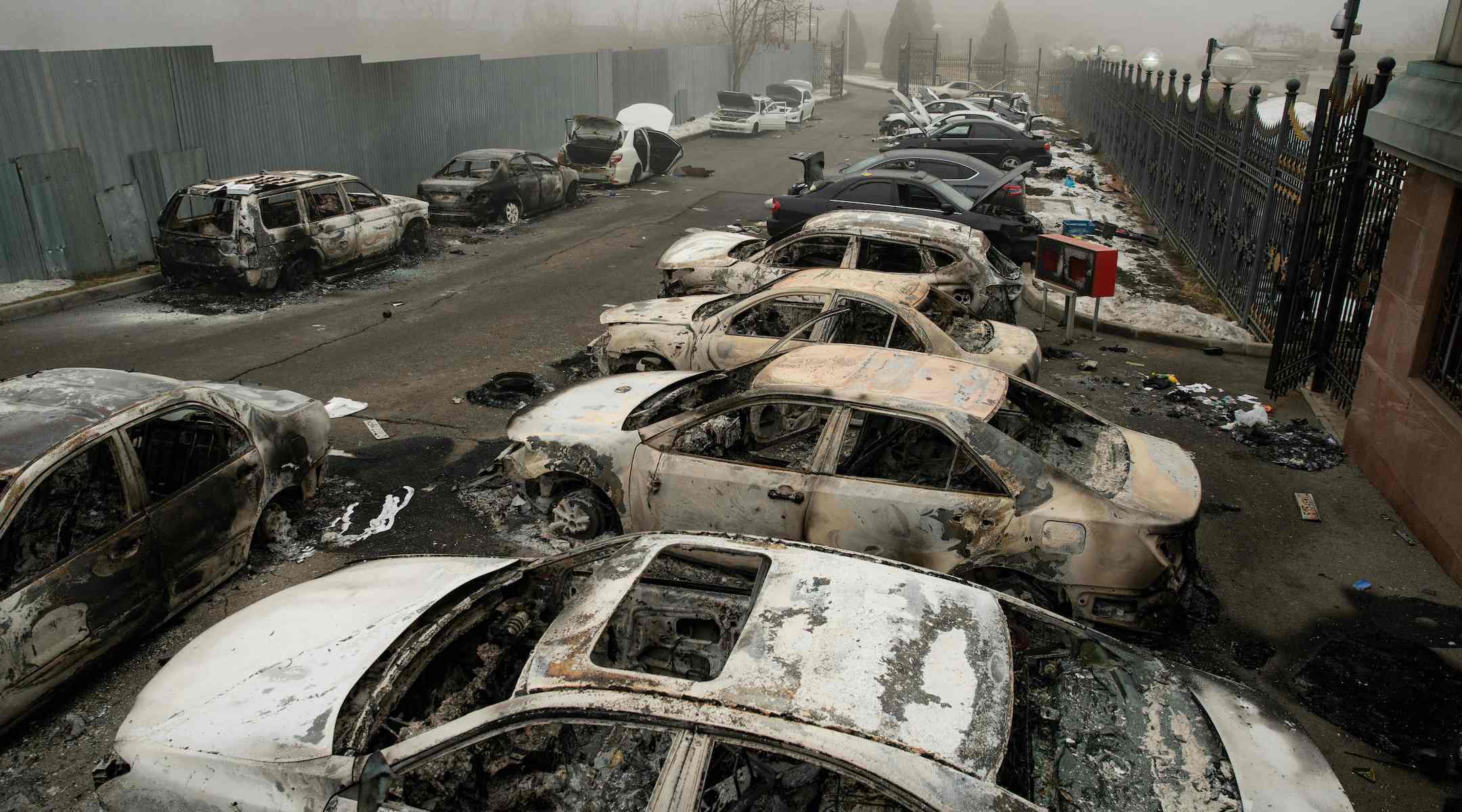 Kazakhstan, a predominantly Muslim nation of 19 million people and a land area roughly four times the size of Texas, harbors significant mineral resources, including about 3% of the world’s known oil reserves and major deposits of coal and natural gas. It is home to a few thousand Jews, according to the World Jewish Congress. In 2019, Tokayev replaced Nursultan Nazarbayev, the first president of Kazakhstan after its independence from the former Soviet Union. Nazarbayev resigned in 2019 amid protests against his three-decade-long dictatorial rule, but hand-picked Tokayev as his successor. Tokayev promised to “maintain continuity” yet nonetheless called for “systemic reforms.”

Many Kazakh-Jewish families earn their living through business and “steer clear of politics altogether,” Levin said.

“And if they’re forced into it, you can expect them to support the government,” Levin said.

Cohen agreed but also called Tokayev “a man of peace and progress.” Cohen claimed without evidence that the protesters “appear not to actually be Kazakhs, who are a peaceful people.” Asked who the protesters were, he said, “We don’t know exactly. They appear to be groups that came here. Kazakhs don’t loot and burn stores; it’s not their way.”

On Friday, Tokayev said he had told security forces to “fire without warning” at protesters, and that those who failed to surrender would be “destroyed,” the BBC reported. He dismissed the idea of negotiating with the protesters.

The United States, United Kingdom, France and other Western nations called for a deescalation of violence by both police and protesters; the autocratic rulers of countries such as Turkey, Belarus and China have expressed solidarity with Tokayev.

Religiously, Kazakh Jews, many of them originating from ancient Georgian and Bukharian Jewish communities, are also mostly traditional and conservative, according to Russian Chief Rabbi Berel Lazar, who is also affiliated with Chabad.

Beit Menachem was built in 1994 about three miles northwest of the city center, near the gravesite of Levi Yitzchak Schneerson, a leader of the Chabad movement. It is a major pilgrimage site that Tokayev’s government added to the country’s list of national heritage sites in 2020.

A new synagogue is being built in the center but is currently not operational.

Lazar, who has close ties with Russian President Vladimir Putin, called the foreign military intervention “a positive development.” The European Union called on Russia to respect Kazakhstan’s sovereignty, and for a “peaceful resolution of the situation.” The EU’s top diplomat, Josep Borrell, reportedly said Russia’s military presence brought back “memories of situations to be avoided.”

“Any force that can stop the violence is good. Then there can come discussions about democracy and the people’s will,” Lazar said about the troops, which number around 2,500.

Although WhatsApp and other chat applications have been shut down “so that conspirators can’t carry out their schemes,” in Cohen’s words, landlines and cellular phones are largely working.

Security forces appear to have regained control of Almaty, Cohen added. He said he believed that Kazakhstan under Tokayev is “a model of peace and tolerance for the whole world.”

- January 08, 2022
Email ThisBlogThis!Share to TwitterShare to FacebookShare to Pinterest