Will Trump’s ‘f— Netanyahu’ moment hurt his standing among Jewish conservatives? Many are unconcerned.

WASHINGTON (JTA) — Donald Trump has kept Jewish Republicans in his corner for years, despite a series of remarks about Jews that have raised eyebrows even in conservative circles.

All ahead of his winning 2016 presidential campaign, he posted a tweet depicting his rival, Hillary Clinton, in the thrall of dollars and a Jewish star; he ran an election eve TV ad alleging a massive conspiracy predominantly directed by Jews; and he told Jewish Republicans “You aren’t going to support me because I don’t want your money.” In 2019, as president, he called Jews who vote for Democrats “very disloyal” to Israel.

But a recently published interview in which he aimed the phrase “f— him” at former Israeli Prime Minister Benjamin Netanyahu threatened to tarnish Trump’s sterling record among the GOP Jewish establishment.

Trump made the comments to Barak Ravid, an Israeli journalist who works for Axios, earlier this year. Besides using the expletive to excoriate Netanyahu for congratulating Joe Biden on his presidential win last year, Trump also said that Netanyahu lied about wanting peace in the Middle East.

He said that the Palestinian Authority president, Mahmoud Abbas, whom Trump said was “like a father,” was more eager to make a peace deal, and that he believed that Netanyahu’s rival, Benny Gantz, was likelier to make peace.

At first, official Jewish Republican reaction downplayed the severity of the comments.

“It’s a nothingburger story,” said Matt Brooks, executive director of the Republican Jewish Coalition, in an emailed statement last week. “Nothing in this story diminishes the historic accomplishments the two accomplished together, the fact that Trump was the most pro-Israel President EVER.”

Yet there is buzz among Republicans that while these revelations are not make-or-break for a party leader who inspires deep devotion among the GOP base, they could be part of an accumulation of wrongfooting — particularly Trump’s focus on false claims that he won the presidential elections — that could hurt his chances at reclaiming the presidency if he enters the 2024 race.

Mike Evans, an evangelical leader known for his closeness to Netanyahu, sent a letter to Trump warning him that the story could be a game-changer.

“Understand that Benjamin Netanyahu has much greater support among evangelicals in America than you,” Evans, who advised Trump when he was president, said in a letter to him obtained by The Washington Post.

Brooks on Twitter later clarified his comments to say that he was not counting out political damage to Trump.

“I didn’t say that there wouldn’t be political fallout in the future, ‘nothingburger’ referred to none of this changes the accomplishments of the past or takes points off of the scoreboard,” he said.

Some Republican insiders are already contemplating a juicy debate moment in the primaries come 2023, should any prominent Republican do the unthinkable and challenge Trump for the nomination: the former president touts his pro-Israel resume and a rival interrupts, reminding the audience that Trump used an expletive against the Israeli prime minister.

A former Republican operative said that it would be foolish for a Trump rival not to seize the opportunity to undercut one of the former president’s strengths.

“I think increasingly, some people are starting to say, ‘You know what, he was great. But wouldn’t [Florida Gov. Ron] DeSantis or someone like that be better going forward?’” said the operative, who asked not to be named because of the influence Trump continues to wield in the party. “And this is another drop on the mounting evidence that, you know, there [are] issues there that might be concerning.” 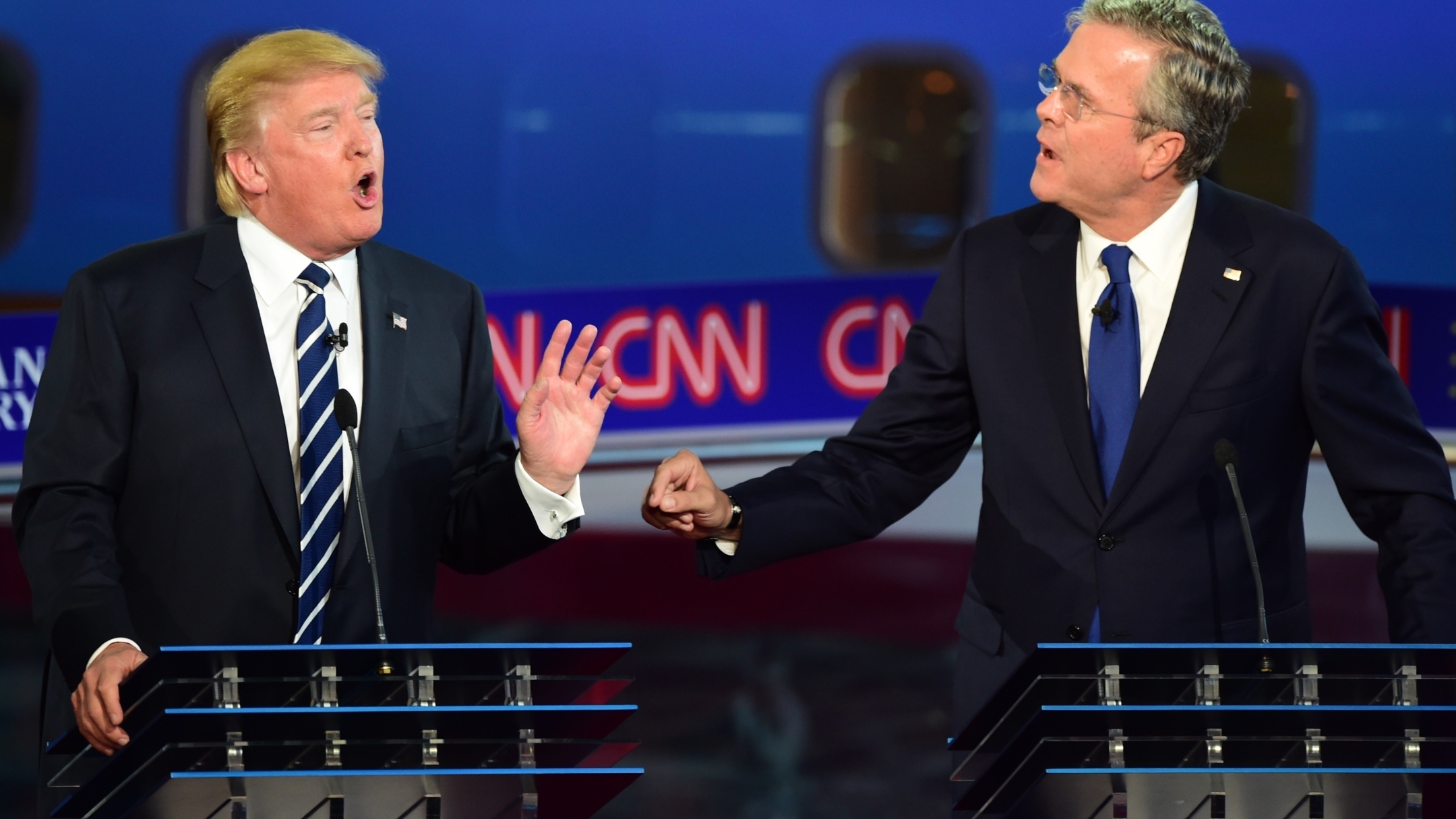 More concerning for a class of pro-Israel conservatives than the words against Netanyahu is Trump’s claim that Abbas is a genial figure who was ready to make peace.

The American Jewish right wing, together with the broader Republican Party, has endeavored since Abbas’ rise as a Palestinian leader in the early 2000s to depict him as an unabashed enabler of terrorism, pointing in particular to the Palestinian Authority’s subsidies sent to families of people jailed or killed for killing Israeli civilians.

“It was more than disappointing that [Trump] would have blamed Bibi for not being serious about peace, when Bibi is dealing with a Palestinian leader who has refused to even negotiate for 12 years and is paying Arabs to murder Jews and promotes hatred and violence,” said Morton Klein, the president of the Zionist Organization of America, which championed Trump’s policies and frequently defended him against Jewish critics during his presidency.

“It was wrong and even absurd for him to praise Abbas as a father figure, and as a nice man, when he’s talking to a man who pays people to murder Jews,” Klein said.

“This only reinforces people’s feelings that Trump has a serious personality problem,” Klein added.

Christians United for Israel, the largest pro-Israel Christian group which enthusiastically backed Trump’s Israel policies, said in a statement that for Christian voters, devotion to Israel outweighed any consideration of personal disputes.

“Evangelical support for Israel is rooted in our Biblical tradition which transcends both politics and personalities,” a spokesman said.

And a number of Jewish Republicans said that Trump was likely not to be damaged because, whatever he was saying now, his actions in office were transformational: He recognized Jerusalem as Israel’s capital and moved the U.S. embassy there; he recognized Israel’s annexation of the Golan Heights; he pulled out of the Iran nuclear deal; he cut virtually all funding to Palestinians; and he brokered the Abraham Accords, normalizing relations between Israel and four Arab countries.

Nick Muzin, an adviser and fundraiser for numerous top Republicans, said that Trump’s deeds overwhelm any consideration one might have of his personality.  “For all his flaws, no American President was a better friend of Israel,” Muzin said. “I’d sooner question Bibi’s allegiance to Israel than I would Trump’s.”

Fred Zeidman, a Texas businessman and major Jewish Republican donor, said that if a rival were to bring up Trump’s comments to Ravid, Trump could use it as an opening to list the historical changes in Israel policy he oversaw during his presidency.

“You’re giving him a perfect opportunity to talk about everything, number one, that he did for Israel, number two, the incredibly positive relationship that he had with Bibi the whole time he was president,” Zeidman said. “This is something that popped up afterward.”

Zeidman said Trump has previously mended relations with people he has feuded with.

“Because it’s just a typical Donald Trump gut reaction,” Zeidman said. “People have disagreed with him, and it doesn’t mean that five minutes later they’re not hugging and kissing again.”

But Zeidman added that Netanyahu had no choice but to congratulate Biden, and showed statesmanship in doing so. “Bibi put country ahead of personal relationships,” he said.

“I highly appreciate President Trump’s big contribution to Israel and its security,” Netanyahu said. “I also appreciate the importance of the strong alliance between Israel and the U.S. and therefore it was important for me to congratulate the incoming president.”

Trump in the interview said that he expected loyalty for loyalty, noting that he timed certain acts, like recognizing Israel’s claim to the Golan Heights, ahead of Israeli elections. “That was a big deal,” Trump said. “People say that was a $10 billion gift. I did it right before the election, which helped him a lot.”

Jewish Democrats are already seizing on what sounds like a quid pro quo sensibility to claim that Trump’s policies were never sincere.

“Like everything else, Trump viewed Israel through the lens of self-serving, transactional politics,” Halie Soifer, the CEO of the Jewish Democratic Council of America, said on Twitter.

Ravid’s revelations, in a book published last week in Hebrew and soon to appear in English, expose a Trump-Netanyahu relationship that was more fraught than previously realized.

Trump and his Middle East negotiating team, led by Trump’s son-in-law Jared Kushner, were furious with Netanyahu for using Kushner’s peace plan as cover to annex part of the West Bank.

Kushner’s peace vision unveiled early in 2020 projected annexation, but not before giving the Palestinians four years to come on board and negotiate an outcome; Netanyahu, under pressure from his right wing, wanted to annex straight away and backed down only in face of the likelihood that annexation would scuttle the Abraham Accords.

Ravid reports that Trump was caught off guard at the unveiling of the peace plan in January 2020, when Netanyahu, at the White House, said he would use the plan as a pretext to annex parts of the West Bank. “What the hell was that?” Trump asked his advisers afterward.

Trump told Ravid he would not let Netanyahu go ahead with annexation. “I got angry and I stopped it because that was really going too far,” Trump said. “That was going way too far.”

Ravid reports that Trump’s ambassador to Israel, David Friedman, who has long-established ties to the settler movement, was the most eager advocate for annexation within the administration, although he too eventually warned Netanyahu to back down.

Friedman this week on Twitter, ostensibly criticizing Ravid but also differing substantially with Trump’s on-the-record claim that annexation was not on the table, said it was envisioned as part of the plan.

“Not only was the President informed and aware of the sovereignty process, he outlined it in this speech,” Friedman wrote. “There were numerous follow-up discussions as well, all of which included me.”

Friedman, who complained on Twitter that he was “never consulted” by Ravid, did not return the Jewish Telegraphic Agency’s request for comment.

Responding to Friedman’s complaints, Ravid noted that Friedman has a book about the negotiations scheduled to appear in February — a release that is now likely to be overshadowed by the revelations in Ravid’s book.