National Socialist Policy Towards Homosexuals: Enemies of the State

(from “Das Schwarze Korps”, official newspaper of the SS, probably 1936)

“ENEMIES OF THE STATE”

More than a year and a half have gone since the famous and once violently controversial provision of Article 175 of the Constitution in June 1935. This revision was necessary prior to the introduction of a new Criminal Code since the wording of the old paragraphs offered no basis for the application of the legal concepts of the National Socialist state. It may therefore be time to look at the practical results which have followed this change in legislation. 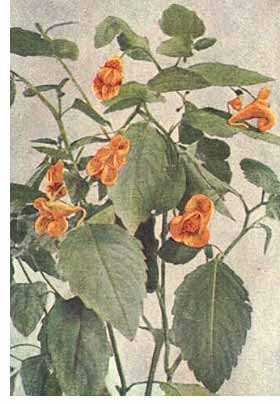 Homosexuality is a “field” in which the bourgeois citizen’s favorite flower is the “touch-me-not.” The average person probably knows many people whose hair stands on end at the very mention of such a topic. But how poorly this problem lends itself to solution through the methods of the ostrich, and how seriously it affects every member of the racial community, is proven by the facts which confronted the new State when it began its work in this field. Following the accession to power, the new State drew up an inventory of clubs and associations embodying the “third sex” concept with vast torrents of “scientific” and “intellectual” verbiage. These organizations were then discovered to have 2,000,000 members! If we subtract children and old men from the total number of male citizens of the Reich, 2,000,000 men represent nearly 10% of all males of working age, in full possession of their mental and physical capacities.

Faced with this horrifying discovery — the concealment or minimization of which would be criminal negligence — the State has only two possibilities to choose from: delicate accommodation, or a ruthless combat on this front. That it opted for the latter was a matter of course: any other choice would have been abject surrender.

Even if the struggle against this pestilence of the racial community — the epidemic contagion of which was an inheritance from the era of liberalism — had not been the logical consequence of our racial ideals, the State would have been compelled to make hard decisions by its own sad experience [the Röhm Putsch]. 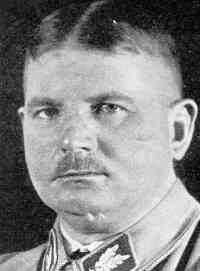 What appeared to be a tragic misfortune, a bitter stroke of fate one and a half years after coming to power, may, to the historians of coming generations, even look like a stroke of luck: the young State was compelled by a cruel fate which appeared to strike out against it, to take cognizance of the plague in its most dangerous forms, and to take up clear front line positions.

At a time when people were still inclined to view homosexuality as a medical problem, and to make cautious adjustments accordingly, homosexuality was found to be a political problem, capable of overthrowing weak governments. The value of this discovery can hardly be overestimated.

It gave our leaders the inner conviction they needed to combat the “medical” problem with political weapons.

Thus, the struggle shifted away from the field of science at the very outset. It no longer mattered against whom one struggled, but rather, the ideal for which one struggled. The “whom” was of no importance, but the “ideal” was obvious to everyone. It was necessary to heal the German body politic, to maintain and reinforce the strength of the German people.

Experience shows that persons whose characters had been infected by this pestilence were mostly weak, unreliable, and mendacious people, sometimes subservient, sometimes power-hungry: people who, in the long run, were incapable by nature of holding political office in a community of the Folk. But unless we assume from the outset that the 2,000,000 people mentioned above are all of them unfit material for reinforcing the strength of the people, it is obvious that the plague still withdrew many – possibly hundreds of thousands – of men from the reproductive process during the best years of their reproductive lives.

A people faced with the task of raising the birth rate by 1.5 million per year cannot afford the luxury of doing without a great proportion of its fathers just because they have fallen victim to a decades-old, unchecked attrition tactic directed against the health of the German people. This consideration defined the political task to be performed in the interests of the racial community. The task was clarified first of all with regards to the “findings” of “experts” who had puzzled over the “etiology and symptomatology” of the pestilence. The “scientific knowledge” of the outstanding “experts” in this field – whether we consult Kraft-Ebing, Schrenck-Rotzing, or Magnus Hirschfeld – are always based on the assumption that homosexuality is an inherited, or, in any case, innate anomaly: the various experts only contradict each other in the assumed causes of the “anomaly”.

The resulting “moral” attitude, expressly formulated by the jew Hirschfeld, speaking in his own case, was simply a logical consequence: homosexuality is inborn, like a cleft palate or a hare lip; just as we may not punish people or persecute them for the possession of a hare lip, nor should be persecute homosexuals or place restrictions upon their personal freedom. 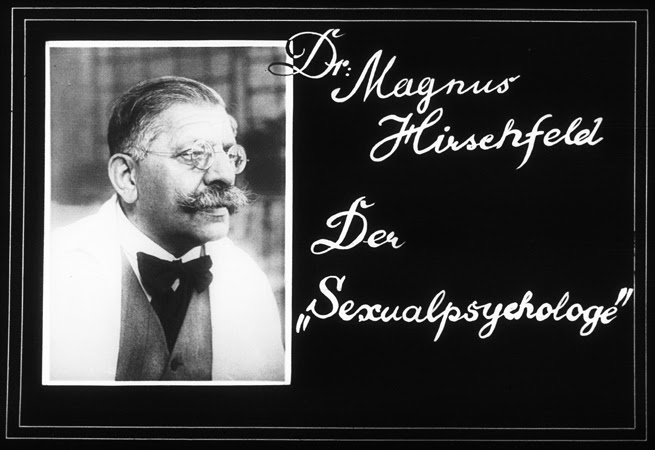 The men who took up the task which confronted them in the Third Reich – this must be stated unambiguously regardless of any humanitarian outcry – would have carried out that task unsparingly even if Hirschfeld & Co. had been right. But their work led to a discovery which was surprising even to them personally: the number of “anomalous cases” was totally insignificant compared to the totality of cases treated. Of 100 homosexuals, not even 2 belonged to the class with which scientific research had heretofore been exclusively concerned! This gives another face to the tear-jerking theory of the “poor sick people who just can’t help it”.

Our opponents may object that such “police findings” are very poorly grounded scientifically: people who have been arrested are motivated to portray themselves as capable of rehabilitation, and their statements are worthless. To this, we reply: if we simply confined ourselves to the statements of criminals, we would obtain a much higher rate than 2%, since the whole theology of homosexuality rests upon their “not being able to help it”. And the smartest of these criminals – the most experienced – are very quick to refer to Section 51. But our responsibility, set forth for us on political grounds, is not concerned solely with the punishment of those who have committed criminal acts: it also comprises educational efforts, and, finally, an appraisal of success, of which the persons affected are mostly unaware. Here is where the “anomalous cases” may be clearly distinguished from their fellow travelers and from those seduced by them. This is also a scientific method. It may even be the only scientific method, since its enquiries are not just concerned with cases which have been sought out to fit the theory but which cannot be generalized: it is directed at the totality of those indiscriminately washed ashore into police custody.

If we simply take these men as they arrive, and if we observe them closely, we find them to be creatures without any strength of character, who have never exercised any will power or felt any inclination towards character building; so that upon superficial observation, we might well conclude that they are incurably ill. But if we compel them to perform systematic labor – which most of them have never before experienced in their lives – if we segregate them from “normal” men under strict guard; if we prevent them from playing the self-exculpatory role of their “illness”; if we compel them to look upon their failure as human beings reflected in the faces of their own kind; a transformation takes place with astonishing rapidity. The “patient” gets well. The “anomaly” is found to be perfectly normal. He undergoes a simple phase of development through which he failed to pass in his youth. This leaves only the 2% of truly anomalous cases, who, just as they constituted the focal point of infection in the outside world, now become the crystallization point of aversion, separating them the chaff from the still useable wheat. 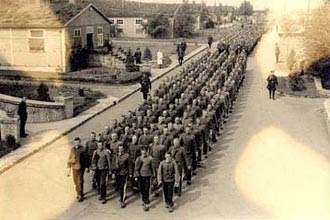 Vagrants marching to work at Esterwegen

Unfortunately, such a healing process cannot be applied across the board in practice. The State cannot build sanatoria for two million “sick people.” The battle lines are only clearly drawn during the initial phases.

But experience in individual cases also shows how correct it was to apply political pressure in a field where criminal proceedings were bound to fail. Only about 2% are sick, and these are not as little to be pitied as born criminals.

The danger of this 2% exceeds all powers of imagination. 40,000 “anomalous cases” who could easily be excluded from the racial community are, if allowed complete freedom, capable of poisoning 2,000,000 other people.

It will be objected that these 2,000,000 must undoubtedly be inclined, due to weakness of character, to allow themselves to be poisoned. Of course, a race cannot consist solely of people as strong as an ox. All the more reason to protect the weaker; the science of hygiene was not developed solely for the benefit of people with a constitution of iron, who throw off every infection effortlessly, but for the benefit of the more susceptible.

Above all, we know that all human beings unconsciously pass through a period in which they are receptive to the poison to some extent. The life of the instincts awakens at a point of development at which the other sex has not yet appeared as the definitive object of desire.

And experience unfortunately teaches that the carriers of this infection approach precisely youths in this age group; not openly – unfortunately – but behind the mask of the “well-meaning friend” who resorts to every conceivable subterfuge to conceal his true aim. This enormous number of petty offenders can only be explained by the misuse of youthful trust.

An accomplice who wrings his hands before accusatory facts can no longer wash those same hands in innocence. For decades, the “intellectual leadership” of the German people tolerated open homosexual propaganda, and even considered it a praiseworthy showcase of “democratic liberalism”.

They stood by and did nothing when the youth movement of the pre-war generation fell increasingly into the hands of the inverts. They didn’t reach for the horsewhip when the “Wandervogel Apostle” Hans Blücher, in his book “Wandervogel: The German Wandervogel Movement as an Erotic Phenomenon” (!), openly admitted that “the Wandervogel movement would have been entirely inconceivable without inverts” (p. 35), because “an inclination towards a person regardless of sex was in the last analysis erotically conditioned. A Wandervogel need not be ashamed of his love for a younger comrade, there is nothing “immoral” about it, etc. Blücher admitted it was no accident that one of the largest youth associations in the district was overwhelmingly controlled by inverts!

That is the theology with which criminals seek to win our youth. That they turn to youth deliberately is proven not only by their criminal tendencies, but by their criminal intent. That intent is aimed at destroying the community of the Folk.

They are criminals against the State, because they act from expediency just as much as from inclination. Constantly surrounded by their own kind, as soon as they hold a position of leadership they become the superiors of dependent subordinates.

They then build a state within a state: a secret state whose interests run counter to those of the Folk, and which therefore constitutes an organization hostile to the State. Thus the circle is closed.

They are not “poor, ill people” who must be “treated”, but enemies of the State who must be destroyed!

- December 11, 2021
Email ThisBlogThis!Share to TwitterShare to FacebookShare to Pinterest