At the Charlottesville trial, defendants got the judge to say ‘gas the kikes.’ Here’s how, and why it matters.

CHARLOTTESVILLE, Va. (JTA) — Days before a neo-Nazi drove his car into a crowd of protesters here at the site of the deadly 2017 “Unite the Right” rally, he texted his mother.

Samantha Bloom was worried that her son would run into trouble in Charlottesville, where he was headed in his gray 2010 Dodge Charger to join a rally billed as a response to the proposed removal of a local statue of Robert E. Lee. “Be careful,” Bloom texted her son, who was then 20.

“We’re not the one [sic] who need to be careful,” James Fields Jr. texted back. He attached a photo of Adolf Hitler.

The text exchanges are among the countless pieces of evidence entered into a civil trial that is unfolding here against Fields and 23 other people and groups accused of orchestrating the rally, which left one person dead and seared images of hate — and phrases such as the marchers’ chant “Jews will not replace us” — into the national consciousness.

For those who are watching closely, the trial has generated not just insights about the event that President Joe Biden cited as a turning point in his decision to run for president but also a potent window into the thinking of some of America’s most avowed ambassadors of hate.

The lead counsel for the plaintiffs, Roberta Kaplan, who is Jewish, and the nonprofit she leads, Integrity First for America, launched the civil lawsuit on behalf of nine people who were injured or traumatized at the event.

The precedent they are citing, the Ku Klux Klan Act of 1871, is a Reconstruction-era law that made it a federal crime to coordinate group violence with racist or terroristic intent. It was designed to crack down on Klan terrorism in the South aimed at keeping Black people from exercising their newly acquired civil rights; an 1983 amendment extends to civilians the right to sue for monetary compensation from the government.

Kaplan and the other plaintiff counsel contend the law also applies to the texts and internet messages sent by the Unite the Right organizers in the lead-up to the rally.

To support their case, Kaplan and the other attorneys have brought in the plaintiffs to describe their suffering, alongside evidence of private and public social media interactions among the rally planners. They have also summoned expert witnesses, including global antisemitism expert Deborah Lipstadt, to comment on the role that hate speech has historically played in fomenting violence.

The defendants, meanwhile, are arguing that their actions were not coordinated and that they cannot be held responsible for the violence that ensued. They’ve defined their plans and incendiary statements leading up to the march as little more than jokes in poor taste.

At the same time, the defendants are also choosing to use their time in court to advance the invective and theories of racial superiority that fueled the violence, turning their own testimony into de facto recruitment tools. According to Ellie Silverman, a Washington Post correspondent who has been covering the trial daily, one defendant representing himself pressured a plaintiff to name friends who were subject to racist vitriol during the rally; those friends were then immediately doxxed by white supremacists tuning into the trial from a public access line.

Some defendants and their attorneys have frequently inserted pejorative terms into the proceedings, including the N-word and “kike,” ostensibly to describe and address the evidence. 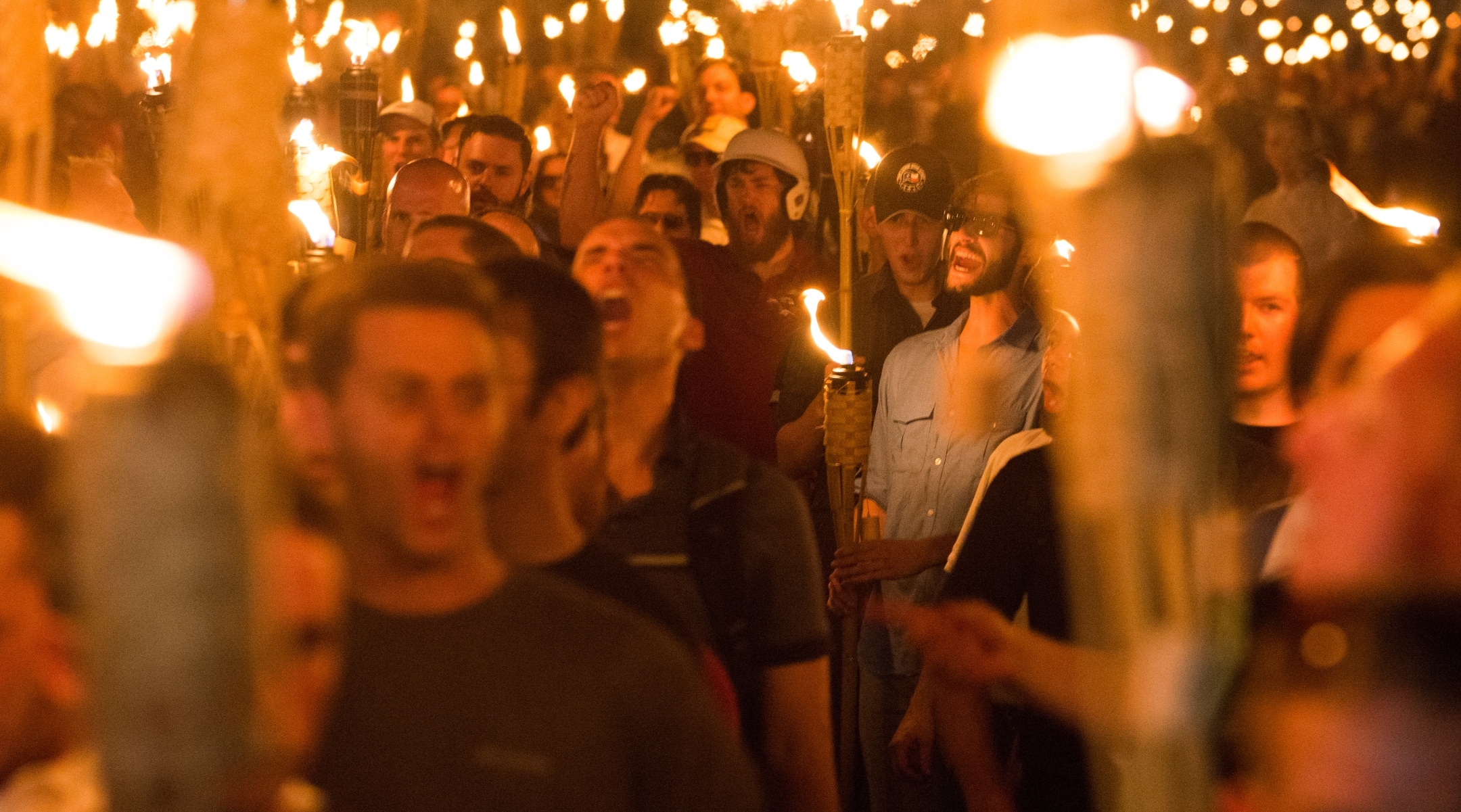 Neo-Nazis and white Supremacists take part in a march the night before the Unite the Right rally in Charlottesville, Va., Aug. 11, 2017. (Zach D Roberts/NurPhoto via Getty Images)

When Peter Simi, an associate professor of sociology at Chapman University in California, took the stand as an expert witness, he found himself having to constantly repeat such terms during cross-examination. Josh Smith, a lawyer for the defense with a history of associations with white supremacists — and who was born Jewish as Daniel Joshua Nusbaum — pressed Simi on the pervasiveness of the term “gas the kikes” among white supremacists. He kept repeating the phrase, ostensibly to show that it was meant ironically and not literally.

Smith kept pressing the issue, frustrating Judge Norman Moon, who ended up using the phrase himself.

“You asked him whether the people were ‘gassing the kikes’ all the time,” Moon said. “The answer to that was no.”

Simi, whom one defendant unsuccessfully pushed to remove as a witness owing to his “Jewish ancestry,” was on the stand to argue that these sorts of conversations, slogans and memes, along with the speeches, the uniforms and the confessions in evidence, were not disparate but were instead knitted into a single culture.

“What we’re talking about here is really an organized effort to transform society by a collection of individuals and organizations,” said Simi, who was embedded with white supremacists for years from the late 1990s through the early 2000s to study their culture. “We’re not talking about a random individual who may express a racist idea over the holidays with their relatives … We’re talking about organizations and individuals that share culture, that have common strategies and common goals.”

Simi pointed to a conversation among some of the rally organizers on a messaging app that devolved from shopping for weapons on Amazon to images of mass murder.

“What we’re dealing with here is a culture of violence,” he said. “When we talk about the white supremacist movement, it’s not really all that different than a culture of violence you find, say, in the Mafia, organized crime, al Qaeda, ISIS … These kinds of conversations are important from a cultural standpoint, in terms of helping normalize violence and make it seem kind of more common and mundane.”

Edward ReBrook, an attorney for defendant Jeff Schoep and the group he once led, the National Socialist Movement, probed Simi about a meme that the expert had analyzed earlier in the day. A member of the chat group planning the rally, identified as Tyrone, had posted a photo of a John Deere excavator, calling it a “multilane protester digester.” Simi suggested the photo anticipated Fields’ murderous car-ramming.

“You get again a reference to this kind of vehicle, which would obviously, if that were to be used, would likely injure, if not kill, people if they were used on protesters,” Simi said.

ReBrook tried to cast the meme as humor, unrelated to any plan to kill people. “Are you aware of any people at the Unite the Right [rally] being injured by John Deere farming equipment?” he asked.

Simi argued that humor was part of the con.

“They develop plausible deniability because they can talk about violence, they can advocate for violence, and then say, ‘Well, that was just a joke,’” he said. 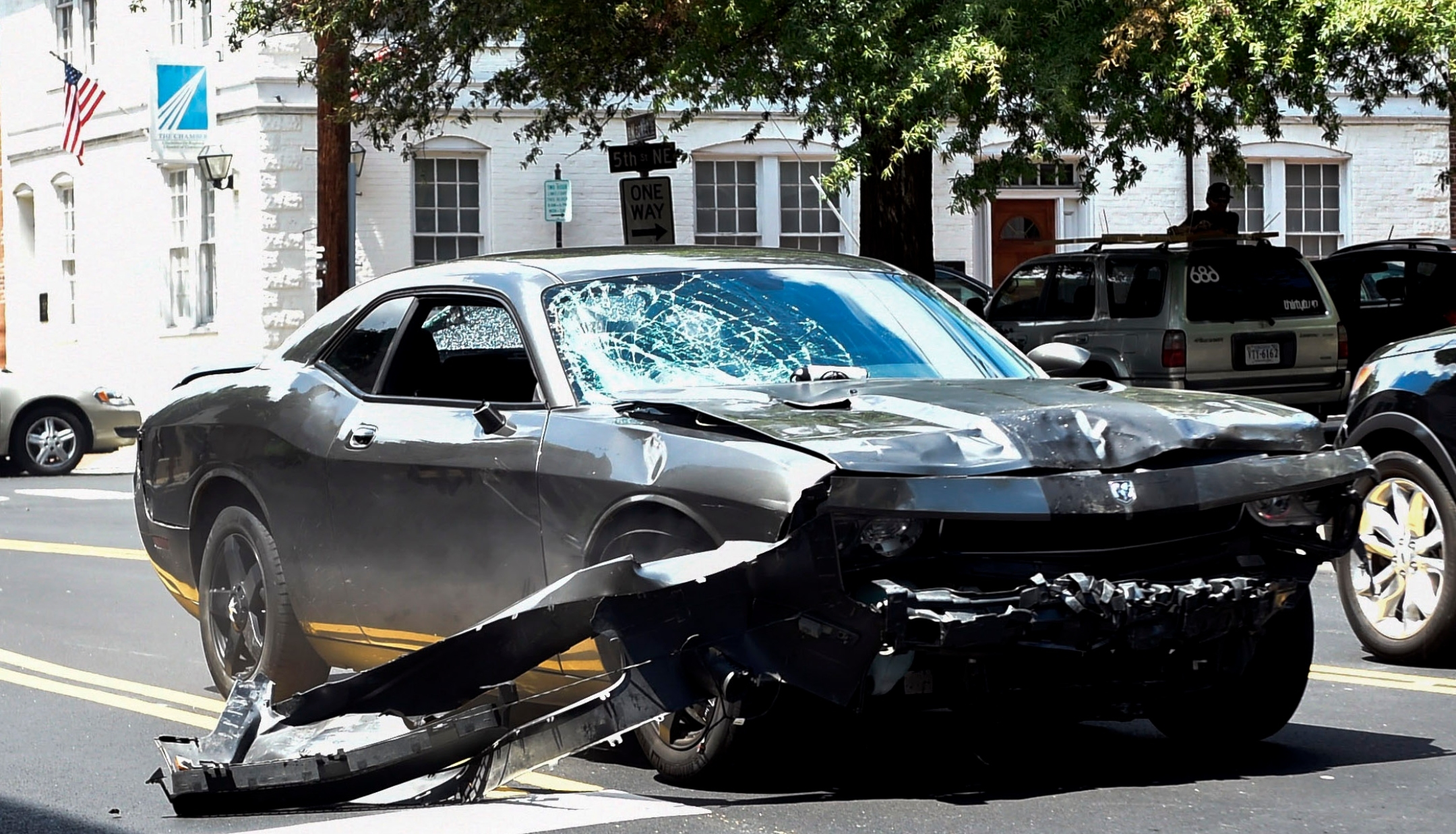 Belligerent defendants aren’t the only obstacles the prosecution has faced during the trial; technical illiteracy has also played a role. Last Thursday, Judge Moon, who is 85 and speaks in an accent redolent of the central Virginia of his upbringing, had to ask counsel David Mills to explain the concept of “tagging.”

“Would you say exactly what you mean now about ‘tagged’?” he asked Mills.

“It’s not repeating what somebody said?” Moon asked.

The trial now heads to the jurors. Charlottesville — and the country — are watching to see whether the lawsuit could impose a severe financial penalty on the white supremacists, thus inhibiting future violence, or whether a loss by the plaintiffs will further embolden the American far right.

As part of his arguments, Mills played a jailhouse recording of a conversation between Fields and his mother. Fields was complaining to Bloom about Susan Bro, the mother of the woman he murdered.

“She’s going to speeches and shit, slandering me,” Fields said.

“Well, she lost her daughter, and—” Samantha Bloom explained to her son.

- November 18, 2021
Email ThisBlogThis!Share to TwitterShare to FacebookShare to Pinterest