Attorney General Merrick Garland is siccing the FBI on parents speaking out at school board meetings against anti-white critical race theory being taught in public schools.

The FBI hasn’t done anything about the post-Floyd riots explosion in crime which lead to an additional 4,901 homicides last year but parents organizing against anti-white CRT brainwashing need to be aggressively shut down.

“In recent months, there has been a disturbing spike in harassment, intimidation, and threats of violence against school administrators, board members, teachers, and staff who participate in the vital work of running our nation’s public schools,” Garland’s memorandum states.

“The Department takes these incidents seriously and is committed to using its authority and resources to discourage these threats, identify them when they occur, and prosecute them when appropriate,” Garland continued. “In the coming days, the Department will announce a series of measures designed to address the rise in criminal conduct directed toward school personnel.”

“Coordination and partnership with local law enforcement is critical to implementing these measures for the benefit of our nation’s nearly 14,000 public school districts. To this end, I am directing the Federal Bureau of Investigation, working with each United States Attorney, to convene meetings with federal, state, local, Tribal, and territorial leaders in each federal judicial district within 30 days of the issuance of this memorandum. These meetings will facilitate the discussion of strategies for addressing threats against school administrators, board members, teachers, and staff, and will open dedicated lines of communication for threat reporting, assessment, and response.”

AG Garland together with DHS head Alejandro Mayorkas declared “white extremists” the greatest threat to the US earlier this year.

DHS issued a terror alert last month suggesting White Americans support the Taliban and are poised to carry out terror attacks at any moment. 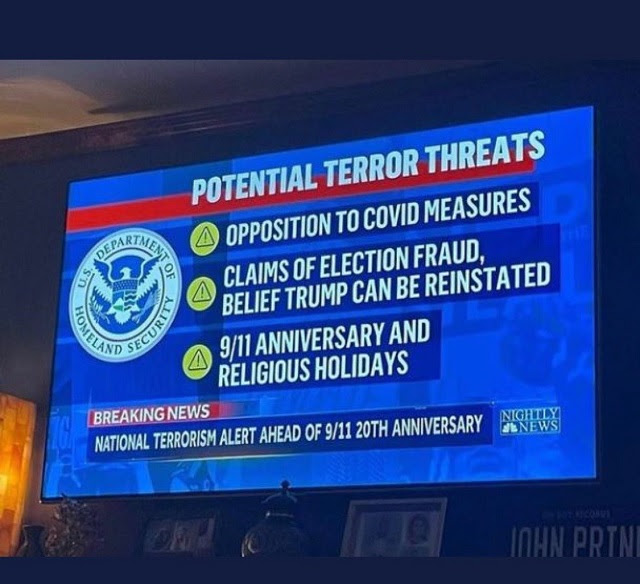 - October 06, 2021
Email ThisBlogThis!Share to TwitterShare to FacebookShare to Pinterest