(JTA) — When Elana Johnson was shopping for a synagogue three years ago, the mother of four approached a Conservative congregation in Lincoln, Nebraska, to ask about joining.

For most synagogues, such an inquiry would have been a no-brainer. But Johnson had elected not to circumcise her three sons, departing from one of Judaism’s most widely practiced traditions, and she was concerned about whether that would be a problem.

Johnson says the synagogue told her she was welcome to enroll her sons, but that without circumcision they would not be allowed to celebrate their bar mitzvah. That decision was in line with a position adopted by the Conservative movement’s Jewish law authorities in 1981 that recommended including non-circumcising families in synagogue life but denying uncircumcised boys a bar mitzvah.

Johnson didn’t feel included: Her family joined a nearby Reform synagogue instead.

“I want to be more observant and in a more observant community,” she said. “But I also just want my kids to be happy and welcome and feel as little judgment as possible no matter where we go.”

A new organization launching this week aims to make that more likely. The group, called Bruchim (Hebrew for “welcome”), is seeking to normalize the decision not to circumcise Jewish boys, a venerable religious rite that goes back to the Bible and which is widely practiced across the spectrum of Jewish observance, even by otherwise non-observant Jewish families.

“Families who are making this decision shouldn’t feel marginalized and they shouldn’t feel like they have to be secret about it,” said Lisa Braver Moss, Bruchim’s co-founder and president.

Bruchim’s website includes ways for Jews who object to circumcision to connect with each other and congregations. (Screenshot)

The group is an outgrowth of advocacy that Moss and Bruchim co-founder and executive director, Rebecca Wald, have been doing for decades. Moss first argued against Jewish circumcision in a 1990 essay, and together they outlined an alternative ceremony, brit shalom (literally “covenant of peace”) in a 2015 book and distributed flyers at that year’s Reform movement convention outlining ways for synagogues to be more welcoming for families that had opted out of circumcision.

Now, in Bruchim, they have a volunteer staff, including Johnson as social media strategist, as well as a four-member rabbinical advisory board. The team includes people with professional backgrounds in all of Judaism’s non-Orthodox movements, as well as several people who grew up Orthodox.

Among its objectives, Bruchim wants to see synagogues make proactive statements of welcome for non-circumcising families similar to those that have become common toward Jews of color and LGBT+ Jews. They also hope rabbis will offer one of several alternative welcome ceremonies for newborns in place of the traditional bris.

Whether Bruchim’s requests will find a ready reception within American Jewish communities is uncertain.

The Reform movement does not have a policy about how to handle families who are considering or have decided not to circumcise. But the movement’s leader, Rabbi Rick Jacobs, said in a statement that ritual circumcision remains something his movement “will always advocate” for — even as other choices are accepted.

“As one of the oldest rituals in the Jewish faith, we will always advocate and educate our community about the beauty and meaning of brit milah,” Jacobs said. But he added, “Connecting oneself to the Jewish community may take many forms, and we understand that some families and individuals are making the choice to not circumcise as part of the brit ceremony. There will always be a place for everyone in the Reform community, regardless of how they or their family choose to express their faith.”

Rabbi Elliot Dorff, the leading bioethicist in the Conservative movement and the chair of its top Jewish law authority, said there is no basis in Jewish law for denying an uncircumcised man access to religious life, including bar-mitzvah. But his movement has not made any formal statements since the 1981 opinion taking bar mitzvah off the table for uncircumcised children.

And Dorff said that advertising openness to non-circumcising families, one of Bruchim’s main asks, is not something that he would endorse. 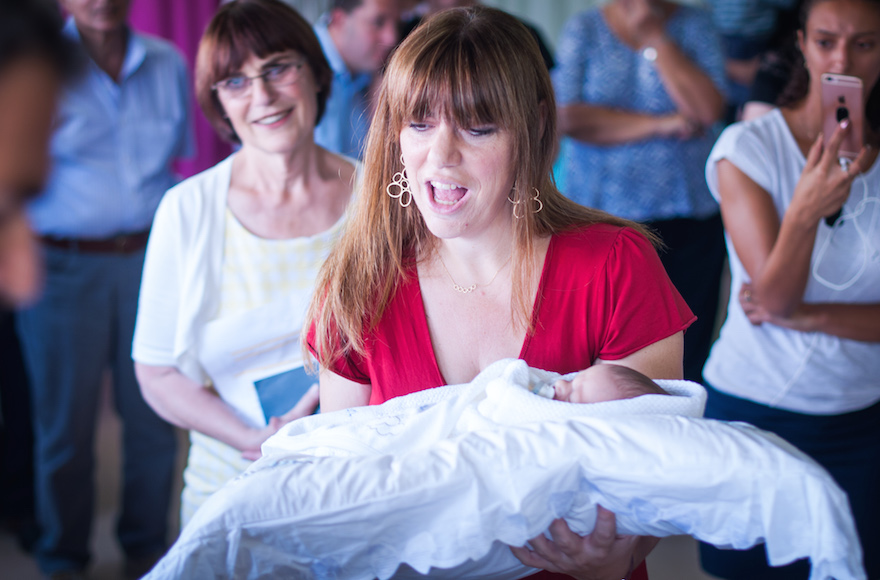 Jerusalem resident Alexandra Benjamin and her son at his bris, or circumcision, in 2016. (Yitz Woolf)

One Bay Area Conservative rabbi who asked not to be named out of fear he would become the target of hate mail, said he has turned away about a half-dozen non-circumcising families in 20 years leading his synagogue.

“It’s a covenantal mitzvah,” the rabbi said, referring to circumcision. “It’s the sign of the covenant, which is about as basic to Judaism as you can get. By not circumcising, you’re saying that you’re outside the covenant of Judaism. And bar-mitzvah is saying you’re part of the mitzvah-observing community. You’re starting with the basic idea that you’re not going to observe one of the most fundamental mitzvot of Judaism.”

No reliable statistics exist on the percentage of American Jewish men who are circumcised, though the vast majority are believed to be. In part, that’s because circumcision is performed on the vast majority of American boys — some 90% of non-Hispanic whites, according to a 2014 study, making the U.S. a global outlier on this issue. But that figure appears to be dropping.

Critics of circumcision object to the practice on a number of grounds, including the physical and emotional trauma inflicted on children, a conviction they lack the right to modify someone’s body without permission and a belief that there is no medical benefit for the child. The position of the American medical establishment is that the benefits of circumcision outweigh the risks.

The broad societal trend, coupled with the fact that 72% of American Jews who married between 2010 and 2020 chose a non-Jewish spouse, according to the 2020 Pew study, means that while the numbers of Jewish parents who choose to leave their children “intact” is almost certainly a tiny minority, their numbers are likely to be growing.

“I looked into the medical reasoning. I thought a lot about the ethics of it all. And my conclusion … was, I don’t think I feel so good about this,” said one Jewish mother who sits on Bruchim’s board but asked not to be named due to the sensitivity of the subject. “Am I the only Jew that doesn’t feel so good about this? And I started to realize that I wasn’t, but everyone felt the need to be very quiet about it.”

Some efforts to bar circumcision — in San Francisco, where Moss lives, and elsewhere — have been criticized as antisemitic. Bruchim is limiting involvement to Jews, advertising that anyone who is Jewish may donate and come to meetings, in an effort to make parents like the board member feel comfortable discussing their wrestling with tradition.

“We need almost a safe space to have these conversations without that sort of outside interference, where people can be really negative, even hateful, or just simply not get it even with the best intentions,” said Johnson. “It’s a conversation that Jewish people should only really be having with other Jewish people. And having Bruchim means that we’re able to offer that support and community in a way that has not really existed until this time.”

- October 07, 2021
Email ThisBlogThis!Share to TwitterShare to FacebookShare to Pinterest