The case for reparations, according to two Jews living in the first American city to offer them

(JTA) — On his path to the article that would get many Americans to consider reparations for Black people for the first time, Ta-Nehisi Coates paused to dwell on the role of Jews in Chicago’s housing inequality.

Coates had just read “Family Properties,” a book by Beryl Satter about how government policy served to impoverish Black people in postwar Chicago while enriching the mortgage industry. Some Jews, like Satter’s father, saw in this situation echoes of the oppression they themselves had experienced and supported the struggle for integration. But many of the profiteers in this story — people who treated Black vulnerability as a business opportunity — were also Jews.

Seeing these two contrasting impulses appear side by side helped Coates crystallize his thinking on communal responsibility for past harm. While these Jewish businessmen might be written off as a few “bad apples,” the same could not be said about a racist system backed wholesale by white votes and violence.

A little over a year later, in 2014, Coates published his seminal Atlantic magazine cover story, “The Case for Reparations,” which also to some extent dealt with Jews, namely their grappling with the idea of reparations after the Holocaust.

Among the many readers who found the article thought-provoking were two Jews in Evanston, Illinois, who would, years later, wind up on opposing sides of a debate over how to enact the country’s first-ever municipal reparations program in their city.

One was Lesley Williams, an African American Jew by choice whose father was denied housing in Evanston because of the color of his skin. The other was Daniel Biss, the grandson of a Holocaust survivor who received reparations from Germany — and who as Evanston’s future mayor would play a role in overseeing the program.

Raised on the values of the Civil Rights Movement, Williams had long understood the concept of America’s moral debt. But it was not until Coates’ article that she saw reparations as a plausible political objective.

“It was from Ta-Nehisi Coates that I got the idea, along with a lot of other people, that this was actually a possibility, this wasn’t a pipe dream,” Williams said in an interview. “There was a reasonable path to doing reparations.”

She would go on to study the issue of reparations from a Jewish angle with fellow members of a new congregation called Tzedek Chicago. Founded by a rabbi who left his Evanston synagogue over his criticism of Israel, the synagogue is best known for attracting “non-Zionist” Jews and infusing social justice politics and activism into ritual practice.

Perhaps the most tangible examples of just how much had shifted arrived about seven years after the publication of the Coates article. If reparations were once a pipe dream, the place where they seemed closest to becoming a reality was in the very town where Williams happened to live.

In March 2021, Evanston became the first American city to approve a plan to begin compensating its Black residents for past discrimination. Funded by cannabis sales tax, the $10 million reparations package would be distributed in stages, with the first $400,000 going to 16 applicants to support home improvement projects and home loans in November.

Williams qualified for the program by way of her father, who, while studying history at Northwestern University in Evanston in the late 1950s, was denied housing because he was Black and had to bunk with friends of friends.

But as the previously unthinkable became reality, Williams not only declined to apply, she vocally opposed the program in comments to city officials and in major media outlets.

For Williams, the project of reparations should have started with an analysis of just how much wealth was stolen from Black residents. The number would likely be much larger than Evanston could pay, but the city could treat it as an obligation. A debt.

She gave the example of how Evanston dealt with unfunded police and fire pension obligations: it levied more property tax.

Echoing a critique voiced by scholars William Darity and Kirsten Mullen, Williams also objected to calling the compensation payments “reparations” because their use was restricted to payments of homeownership costs.

“When you owe people money you don’t say, ‘Well, I really think you should buy houses with the money that I stole from you.’ You just say, ‘I stole money from you, I’m sorry. Here’s the money that I owe you and you can do whatever the hell you want with it,’” Williams said.

Darity and Mullen use the example of Holocaust reparations to argue for unconditional payments to victims.

Evanston’s mayor, Daniel Biss, understands the comparison better than most: one of his grandmothers survived Auschwitz, and went on to receive restitution payments from the German government. 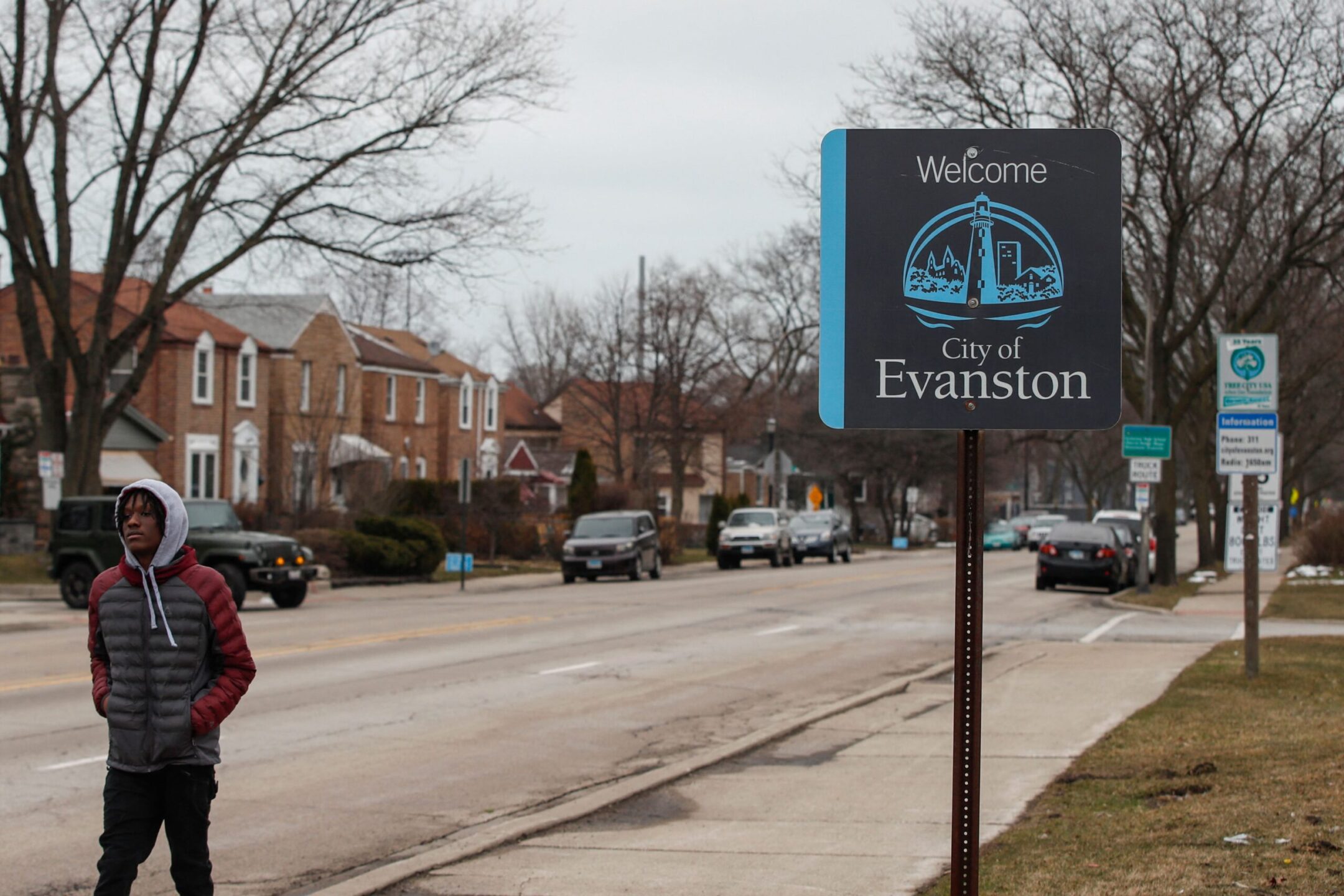 Evanston, Illinois, became the first place in the United States to provide reparations to its Black residents in 2021. (Kamil Krzaczynski/AFP via Getty Images)

When Evanston debated and then passed its reparations plan, Biss was not yet mayor. He was in the crowd listening to the various voices on the issue. But he didn’t come to the same conclusion as Williams, who happens to be a personal friend. Persuaded that the program was a good place to start — and that it was appropriate to use cannabis tax money because of how the war on drugs harmed Black communities — Biss sided with the 8-1 majority of city council that approved the plan.

Two months after that happened, Biss was sworn in. Even now, though, he won’t have a direct role in shaping reparations because, according to Evanston’s government structure, the mayor presides over council meetings but doesn’t vote on ordinances (unless there’s a tie to break). His job is more ceremonial.

“My role comes in a few parts,” he said. “Number one is acting as a kind of ambassador and cheerleader for the program to signal that this is something that the city takes very seriously. And then part of it is just making sure that all voices are heard, and that the [reparations committee] is moving forward and doing its work so that we can actually get this thing off the ground.”

In Biss’ approach, being successful with this local program, however limited it may be, is the key.

“We can inspire other communities and perhaps even state in the federal government to pick up their share of the load as well,” Biss said in a March interview.

Biss wasn’t just dreaming. The mayors of 12 other cities, including Los Angeles, Denver and St Louis, have since pledged to pursue reparations programs, and in April in Washington, D.C., lawmakers advanced a bill to study reparations that had been languishing in committee for 30 years.

Biss, who said his awareness of the Holocaust’s “unimaginable horrors” propelled him toward a politics of social justice, believes that Judaism’s teachings can help advance the reparations cause.

When it comes to people who are skeptical about reparations — Biss’ example: “People who say, ‘What was done was terrible, but hold on, I didn’t do it. Why are my tax dollars being utilized to fix it?’” — he suggests that Passover is a useful guide.

Biss says that the Passover ceremony, with the reading of the Haggadah, is about the connection between liberation and history.