Should We Even Care That Kosher Conservatives Are Now Being Censored?

Lots of Republicans have recently been banned from social media, including the sitting president of the United States himself. Parler, the Twitter/Facebook alternative, has been dropped from Google Play, the Apple App store, can no longer be hosted on Amazon Web Services, etc. and is currently down. The site had millions of conservative users, including sitting politicians and Fox News personalities. Big tech is flexing its muscles in a serious way now and sending a message, making it so that being a kosher conservatives is now essentially verboden.

We were banned from social media and deplatformed from raising money online years ago. None of these kosher conservatives said anything about it at the time. They did not care, or more likely, they agreed that “Nazis” and “White supremacists” should be denied any kind of voice. Now that they are all crying about censorship, I find it hard to have any sympathy for these people who supported (and continue to support) the most pro-Zionist president in US history. Just like the “far right” fell into the trap set for them by the likes of Richard Spencer, David Duke, TRS, and the rest during Charlottesville, these MAGA marchers were led right into the DC trap by their pied piper ZOG emperor. Now even donning a red cap in America will be seen as an act of domestic extremism. Calling for politicians and the media to be punished for their treason and lies will be treated as terroristic threats. This, of course, is all by design.

If these kosher conservatives really wanted to make America great, drain the swamp, or stop the real steal, they would have been with me years ago in DC protesting against AIPAC. Imagine if they had stormed the convention center – oy vey! Of course that would never happen, as it would upset the GOP’s paymaster, Sheldon Adelson, as well as the ZOG emperor himself. It is just crazy how these kosher conservatives think that Democrats are the big problem with America, when both Republicans and Democrats get together to grovel at the feet of the “chosen” ones.

Perhaps the best course of action for people like us is to try to reach through to the MAGA crowd and explain to them who is really behind censorship. It’s not just lefties, BLM, some vague “globalists”, or even the tech monopoly in Silicon Valley. Behind them all, and actually embedded within their organizations, you will find the jewish thought police (with the ADL being only one notable example). Jews are the ones who determine what is allowed and what needs to be banned off the internet. Hopefully the genuine people on “the right” will realize this one day.

Actually, I hope genuine people on “the left” (there are some, believe it or not) will soon wake up to the reality that it is jewish supremacists, not the White male patriarchy, who are the oppressive oligarchs ruling over us.

This whole fiasco along with the subsequent censorship is intended, in my opinion, to foment a Civil War in America, getting the American people to fight against each other along party lines, red vs blue. This would be disastrous for everyone involved, except the people ruling over us. They would be sitting back and rubbing their hands while Americans kill each other, destabilize the country, and pave the way for a UN occupation, featuring lots of Chinese troops.

I know it is tempting to go out and take the fight to “lefties”, like Antifa and BLM, but this is exactly what their paymasters want. Why should we ever join up with MAGA men, like the anti-White Proud Boys, who stand in solidarity with Israel? They are just the other side of the same shekel. 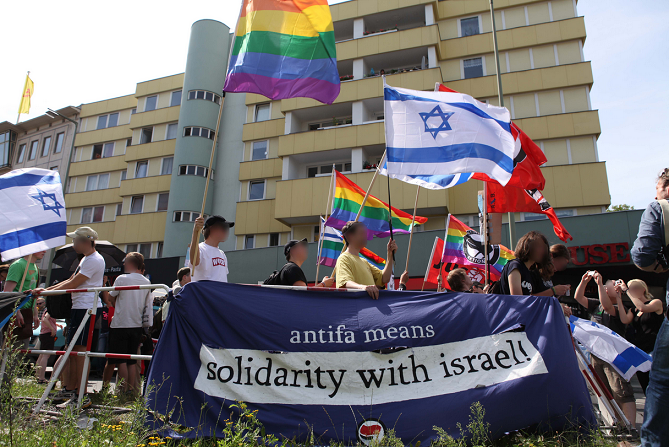 Either side you choose, you are fighting for Israel and jewish supremacism.

In conclusion, we should use this all as an opportunity to give people a crash course in political realities.

- January 11, 2021
Email ThisBlogThis!Share to TwitterShare to FacebookShare to Pinterest