“Operation Trust” was a Bolshevik counterintelligence operation run from 1921 to 1926 aimed at neutralizing opposition by creating the false impression that a powerful group of military leaders had organized to stop the communists’ takeover.

Here’s an except on the “Trust” operation from pages 13-14 of Soviet defector Anatoliy Golitsyn’s book, “New Lies for Old”: 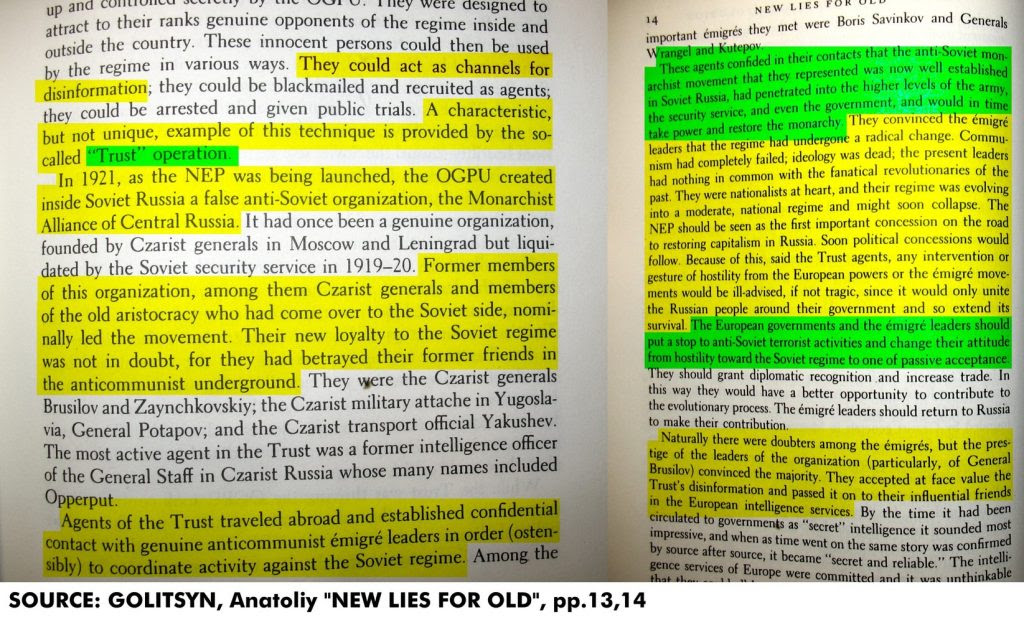 The similarities with the Q-Anon “Trust The Plan™” psy-op are remarkable.

From Wikipedia’s article on Operation Trust:

Operation Trust was a counterintelligence operation of the State Political Directorate (GPU) of the Soviet Union. The operation, which was set up by GPU’s predecessor Cheka, ran from 1921 to 1926, set up a fake anti-Bolshevik resistance organization, “Monarchist Union of Central Russia”, MUCR, in order to help the OGPU identify real monarchists and anti-Bolsheviks. The created front company was called the Moscow Municipal Credit Association.

[…] The one Western historian who had limited access to the Trust files, John Costello, reported that they comprised thirty-seven volumes and were such a bewildering welter of double-agents, changed code names, and interlocking deception operations with “the complexity of a symphonic score”, that Russian historians from the Intelligence Service had difficulty separating fact from fantasy.
That sounds like the Confucius-style nonsense put out by Q-Anon.

Is General Flynn our General Brusliv?

Q-Anon made Trump supporters who were right to be angry over the criminal nature of our ruling class delude themselves with fantasies that “White hats” in the military were going to save us while Attorney General William Barr was busy covering-up the Jeffrey Epstein case and the Kushner administration was busy pardoning fraudsters who donated to the Aleph Institute and releasing traitor Jonathan Pollard from parole to “make aliyah” in Israel.

Many of the neocons in our government are the literal descendants of Trotskyites, so it’s not out of the question they’d pull the same trick twice.

This Q-Anon operation has had some blowback — Q-believing Air Force veteran Ashli Babbitt was horrifically executed in cold blood by a Capitol police officer and turned into a martyr — but the movement has gotten tons of Trump supporters thrown in prison and labeled domestic terrorists.

The Biden administration is now plotting to use the events of Jan 6 to justify PATRIOT Act 2.0 which aims to criminalize all dissent as domestic terrorism.

Their neo-Bolshevik revolution is almost complete.

It doesn’t require “anonymous leaks” from “secret military intelligence officers” to witness the conspiratorial treachery our government is committing out in the open!