Despite the Capitol violence, this Israeli town is still named after Donald Trump

And there are no plans to change the name, even as Israeli leaders condemned the Capitol mob.

“There is no change in our position,” Golan Heights Regional Council spokesperson Limor Holetz told the Jewish Telegraphic Agency on Sunday evening, adding that the town still has financial backing from the government.

Israel’s Settlement Affairs Ministry, which is partially funding the town’s development, also confirmed to JTA that the name is not under discussion.

The council’s position is emblematic of the enduring popularity of Trump among Israeli settlers and others on the political right, despite his scandals at home. Many right-wing Israelis lionize Trump for his support of the settlements, his hardline posture against Iran and the normalization agreements between Israel and Arab states that his administration helped broker.

“The Israel-related policies of the Trump administration stand for themselves,” Oded Revivi, the mayor of the West Bank settlement of Efrat, said Thursday. Trump’s policies, he said, “have opened up many new doors for the State of Israel.”

“Legacies are not determined according to news cycle schedules,” he said.

Trump Heights was announced with great fanfare in 2019 after Trump recognized Israeli sovereignty over the Golan, which Israel captured from Syria in 1967. But a year and a half after the dedication ceremony, the village can generously be described as being in the very early stages of development.

Its only residents are a number of elderly Russian immigrants who moved to the area in 1991 to a new town then called Beruchim. That attempt at settlement failed and they were the few that remained, living in small, prefab houses.

The sign near those houses that reads Trump Heights has gone through a few ups and downs, too. In 2019, at the town’s inauguration, the sign featured a gold, blocky Trumpian font. By the middle of last year, only two letters remained. A photo accompanying a November article about the site displays a repaired sign, but a video uploaded in December shows the T in Trump having dropped off.

Next to the large sign is a monument apparently depicting an eagle flying in front of a menorah. A plaque affixed underneath reads “In honor of President Donald J. Trump.” On the other side is a much smaller sign reading “Beruchim, founded 1991.” 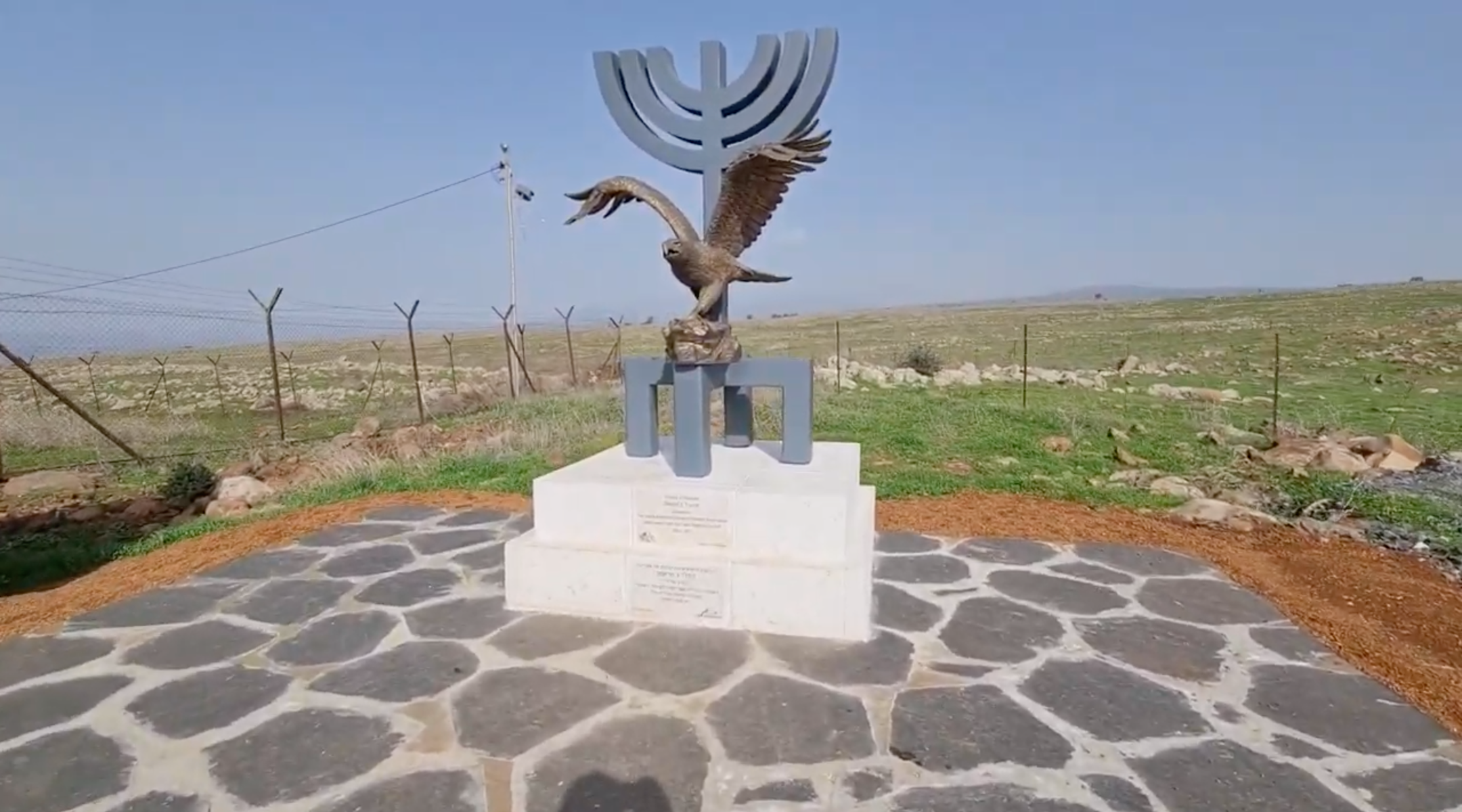 Next to the large sign bearing the town’s name is a monument with a plaque honoring Trump. (Screenshot from YouTube)

Despite the delays, the town is pressing on. The past several months have seen a burst of activity, with multiple homes — more small prefab buildings, with cream-colored sides, corrugated roofs and girder foundations resting on stones — erected by the local government. They are intended to house the 20 or 30 families expected in the first wave of settlement next month, giving the site, located amid scrubby hills far from any major population center, something of a trailer park feel.

The Golan is a rural, mountainous region in Israel’s northeast corner that is home to fewer than 50,000 people — approximately half of them Jewish and the other half Druze, a religious group. It was one of several territories captured by Israel in the 1967 Six-Day War. The government annexed the heights in 1981.

Israel’s settlements are located in the West Bank, another territory captured in 1967 that Israel occupies but has not annexed. While the West Bank has been far more of a flashpoint due to the Israeli-Palestinian conflict and the settlements, until the Trump administration, the U.S. government had viewed both the Golan and the West Bank as occupied.

In addition to recognizing Israel’s annexation of the Golan, the Trump administration does not view West Bank settlements as illegal — a break from longstanding precedent. Prime Minister Benjamin Netanyahu’s government has sought to capitalize on that stance until Trump’s last days, announcing this week that Israel will construct more than 800 new settler homes in the week that President-elect Joe Biden takes office.

Ahead of the November U.S. election, 70% of Jewish Israelis said that Trump was the better candidate for their nation’s interests. Affection for Trump appears to persist among Israelis living in West Bank settlements despite last Wednesday’s violence.

Trump should be appreciated for his policies if not his personal conduct, said Seth Vogelman, an American immigrant who lives in Maale Adumim, a suburban Jerusalem settlement. He compared Trump to Oskar Schindler, the German industrialist who saved more than 1,000 Jews during the Holocaust.

“Schindler was a card-carrying member of the Nazi Party, but people regard him as a hero,” Vogelman said. “Trump helped distance Iran from nuclear capability, while Obama aided and abetted that process.”

It isn’t surprising that Israelis tend to focus on Israeli issues to the exclusion of American politics, said Sara Yael Hirschhorn, a professor of Israel studies at Northwestern University.

“Their concern with the Trump administration has been to extract their own policy needs and goals,” said Hirschhorn, the author of “City on a Hilltop,” a book about the settlement movement. “And I suppose American domestic politics is just somewhat irrelevant.”

- January 13, 2021
Email ThisBlogThis!Share to TwitterShare to FacebookShare to Pinterest