Over Half of Young American Adults Now Live With Their Parents

In the last few decades, young adults have faced harsh economic realities – from the financial crisis in 2008 to this year’s global pandemic, both triggering catastrophic losses in jobs and financial stability.

And while the widespread effects of COVID-19 have yet to be fully captured, Visual Capitalist’s Aran Ali notes that young adults are already now living with their parents to a greater degree than witnessed in 120 years – surpassing even the Depression-era generation.

Young adults today are categorized as either late Millennials and Gen-Zers. For them, COVID-19 has just been another addition to the list of financial hardships they’ve been up against, such as a precarious job market and the rising cost of living. 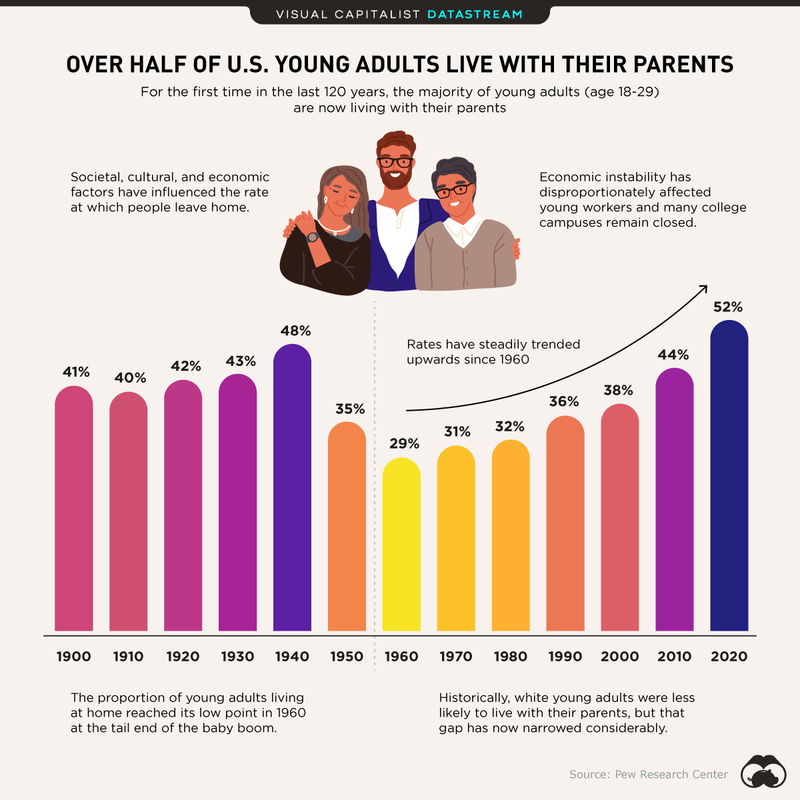 Failure to Launch: But Why?

There are a few possible factors that could explain the increase in young adults living with their parents.

1. The lackluster job market
The barista or server with multiple degrees has become a common portrayal of the struggling millennial. Despite the less than rosy outcomes, it has not been for want of trying. Younger people today are actually the most educated generation in history. Unfortunately, a degree does not map out a path to success the way it did for prior generations.

2. Tying the knot later
Today, people get married nearly a decade later than prior historical averages, and many young adults are opting to stay with their parents until they tie the knot. It’s also worth noting that as time goes on, young adults are getting married at lower rates than in the past.