Each year, around April 19, the media and politicians commemorate what they call the Warsaw ghetto “uprising,” “revolt” or “insurrection.” [1] In journalistic accounts the affair has taken on increasingly epic and symbolic proportions. At a Holocaust ceremony in New York in April 1993, American Vice President Al Gore declared: “The story of the Warsaw ghetto is sacred text for our time.”[2] In fact, this “story” is a legend based only partially on historical reality.

“An insurrection never took place.”[3] This remark is by Marek Edelman, who was a leader of one of the armed jewish groups in the ghetto. He added: “We didn’t even choose the day; the Germans set it by entering the ghetto to find the last jews.” Edelman also stated that the number of jews who took up arms never exceeded 220. (Other estimates of the number of jewish ghetto fighters range from several hundred to as many as 2,000. In any case, no more than a minute portion of the ghetto population took part in the fighting.)[4]

Edelman’s view has been confirmed by Yitzhak Zuckerman, another leader of the main jewish armed group in the ghetto. Zuckerman has defined the “war aims” of the jewish fighters in these words: “For us it was a question of organizing a defense, not an uprising. In an uprising, the initiative is with the one rising up. We, we sought only to defend ourselves; the initiative was entirely on the side of the Germans.”[5]

This was no uprising of an entire community to gain its freedom or to resist deportation. It was, rather, the reaction of only a relative handful of young jews who, seeing German troops penetrate their sanctuary, first fought back, then on the third day tried unsuccessfully to flee, and then, finally, surrounded, put up sustained armed resistance.[6]

The whole thing should more accurately be called a German police operation rather than an “uprising” or “insurrection” by the jews of Warsaw. By contrast, a real uprising was staged in Warsaw, August-October 1944, by the Polish Home Army, commanded by General “Bor” Komorowski. However, the media scarcely notes this heroic insurrection, which the Soviets allowed the Germans to crush at their leisure. The Poles fought with such courage that the Germans permitted them to surrender with full military honors, treating them as prisoners of war under the Geneva convention rather than as terrorist insurgents.

To understand what happened in the Warsaw ghetto in April-May 1943, it is important to know why the Germans decided to launch a police operation. In the city’s “jewish quarter” or “ghetto” were 36,000 officially registered residents, as well as, in all probability, more than 20,000 clandestine inhabitants.[7] The ghetto was, in a sense, a city within a city, administered by a “jewish Council” (Judenrat), and a jewish police force, which collaborated with the German occupation authorities, even against Jewish “terrorists.” Many thousands of jewish workers toiled in ghetto workshops and factories, supplying products vital to the German war effort.

Following the first Soviet air attack against central Warsaw on August 21, 1942, bomb shelters were built, on German orders, everywhere in the city, including the ghetto, for the protection of the residents. The Germans furnished the jews with the cement and other necessary materials for these shelters, which legend has transformed into “blockhouses” and “bunkers.”[8] So extensive was this “network of subterranean refuges and hiding places” that, according to one prominent Holocaust historian, “in the end, every jew in the ghetto had his own spot in one of the shelters set up in the central part of the ghetto.”[9]

Small armed jewish groups, numbering no more than 220 persons, were active. The most important of these was the “Jewish Combat Organization” (JCO), whose members were mostly young men in their twenties. Its “general directives for combat” specified “acts of terror” against the jewish police, the jewish Council, and the Werkschutz (protection service for the factories and workshops). This JCO directive stated specifically: “The general staff works out the central plan of action — sabotage and terror — directed against the enemy.”[10] 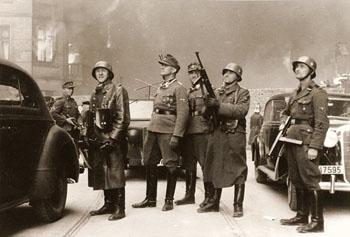 Accordingly, these “fighters” or “terrorists” used “sabotage and terror” to shake down jewish ghetto police, jewish Council officials, and workshop guards.[11] The “terrorists” also profited from the ghetto’s intensive industrial and commercial life, shaking down merchants and other residents by threat and blackmail, even holding them prisoner in their homes for ransom. They were able to buy weapons from soldiers stationed in Warsaw, who, like troops stationed elsewhere well behind the front lines, often served in patchwork units, ill-trained and poorly motivated. The ghetto “terrorists” even carried out murderous attacks against German troops and jewish collaborators.

The ghetto became increasingly insecure. Because of this, the Polish population became more and more hostile to its existence, while the Germans, for their part, feared that it could become a threat to the city’s important role as a rail nexus in the war economy and as a hub for transport of troops to the Eastern front. Himmler therefore decided to relocate the jewish population, along with the workshops and factories, to the Lublin region, and to raze the ghetto, replacing it with a park. At first the Germans tried to convince the jews to voluntarily accept relocation. But the “terrorists” refused to accept this, aware that such a transfer would mean for them losing, simultaneously, their financial base as well as their freedom of movement. They devoted all their efforts to opposing this, until on April 19, 1943, a police operation to forcibly evacuate the remaining jews was begun on Himmler’s order.

Himmler, eager to minimize casualties, was angered. That same morning, he relieved von Sammern-Frankenegg of command and replaced him with SS General Jürgen Stroop. Stroop, ordered to carry out the operation slowly to minimize casualties, did so in the following manner: each morning, the troops would enter the ghetto, clear buildings of their residents and use smoke candles (not poison gas) to drive out the jews hiding in the air-raid shelters; the buildings were destroyed as they were evacuated. Each evening the troops sealed the ghetto so that nobody could escape during the night. 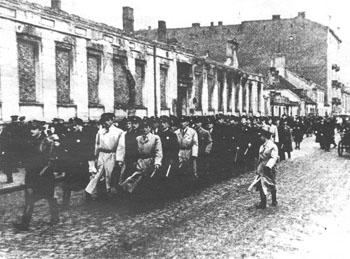 jewish police of the Warsaw ghetto pass in review. A governing jewish Council administered the city’s jewish residential district. “In practice,” historian Emmanuel Ringelblum noted, “the ghetto was virtually an autonomous district with its own local city administration, police service, postal system,jail, and even an Office for Weights and Measures.”

Skirmishes lasted from April 19 to May 16, 1943, so that altogether the operation required 28 days. On the third day, many of the jewish armed fighters tried to escape, most whom where shot or captured. Contrary to some reports, the German command never called for air support to destroy the ghetto, and the operation involved no aerial bombardment.

The number of jewish dead is unknown.[13] An often-cited figure of 56,065 is, in fact, the number of jews who were apprehended. The great majority of these were deported, many to the transit camp at Treblinka from where they were taken to Majdanek (Lublin).[14] German deaths in the operation totalled 16. (This included one Polish policeman.)

One should not doubt either the courage of the jewish resistance in the ghetto or the tragic nature of the whole affair, with the civilian population trapped in the cross-fire between various heterogeneous German units and small groups of jewish guerrillas scattered throughout the ghetto. Contrary to some grandiose propaganda claims, though, what took place was far from an “apocalyptic” revolt, as one writer has recently called it,[15] particularly when one is mindful of the tens of thousands of deaths, civilian and military, that occurred during those same 28 days, on battlefields around the globe and in the European cities bombarded by British and American air forces.[16]