From the SF Chronicle:

The San Francisco Board of Supervisors unanimously passed the Caren Act Tuesday — a new law that makes it illegal for someone to call 911 with a false, racially charged complaint.

The name of the law — Caution Against Racially and Exploitative Non-Emergencies — is a play on the internet meme of “Karens,” which represent entitled white women complaining about people of color. The law, which must pass a second vote next week, would allow people to sue the 911 caller in civil court if they felt harassed or discriminated against by the action.

[…] “Rather than calling the police or law enforcement on your neighbor or someone who you think doesn’t look like they should be your neighbor, try talking to them and getting to know them. Build relationships to know your community,” said Supervisor Shamann Walton, author of the ordinance.

The hope is that the legislation will spur people to use more discretion when calling 911 for a nonemergency. The law applies to those who feel they were harassed or embarrassed by a 911 caller, on the basis of race, sex, age, religion, disability, gender identity, weight or height.

Translation: check your privilege and accept getting robbed, raped or murdered.

As the Minneapolis Police Department told residents after widespread riots back in August, “Be prepared to give up your cell phone and purse/wallet … Do not argue or fight with the criminal. Do as they say.”

Dubbed the Caution Against Racial and Exploitative Non-Emergencies (CAREN) Act, the measure passed the chamber with all 11 supervisors voting yes. The name is a nod to a widespread meme using the name “Karen” to describe a specific type of white, middle-aged woman, who exhibits behaviors that stem from privilege, such as using the police to target people of color.

[…] Under the CAREN Act, calls to 911 with the specific intent to discriminate over someone’s race, ethnicity, national origin, place of birth, sexual orientation, gender identity or religion is banned. Victims of such calls will also be allowed to sue the caller.

“Communities of color have the right to go about daily activities without being threatened by someone calling 911 on them due to someone’s racism,” Walton went on to say. “Rather than calling the police or law enforcement on your neighbor or someone who you think doesn’t look like they should be your neighbor, try talking to them and getting to know them. Let’s build relationships in our communities.”

This bill is going to be combined with the statewide bill AB1550 that will make it a hate crime to make “racially-motivated” 911 calls in addition to opening callers up to civil damages.

Democrats are doing everything in their power to intimidate White women and make them terrified to call 911 when they feel threatened by non-White suspects.

Not only do White women face the threat of being turned into the next “Karen” and doxed, demonized, fired and inundated with death threats on social media but soon they may face being charged with “hate crimes” and being sued for civil damages.

Perhaps the highest-profile case of a “Karen” was Amy Cooper of Manhattan, a White woman who called 911 on a Black man who openly admitted to threatening her. 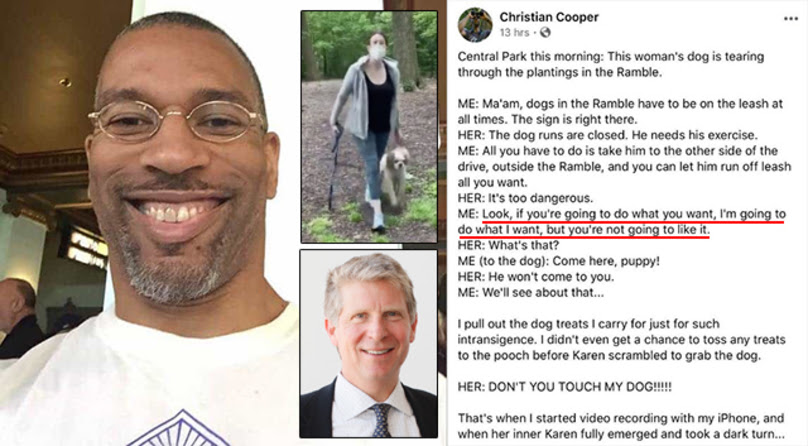 Cooper was doxed, fired from her job, had her dog taken away temporarily and was brought up on criminal charges by corrupt Manhattan DA Cyrus Vance.

The New York Times is still dragging her name through the mud and smeared her in a false and defamatory story just a few days ago.

Cooper is reportedly negotiating a plea deal “to avoid prison.”

The left does not want and does not care about “equality” — they want revenge.

- October 24, 2020
Email ThisBlogThis!Share to TwitterShare to FacebookShare to Pinterest