The Difference Between Equality and Equity: The Case For Progressive Capitalism 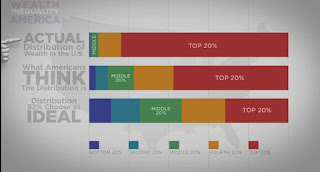 This might be one of the most important topics that I ever discuss on my website, the issue of wealth and income inequality and how it will lead to the collapse of the United States of America if it is not addressed in the next four years.   Donald Trump, yesterday, came out and for the first time admitted that the nation had a problem of "taxation inequality", which he tried to differentiate from "income inequality" yet the terms are almost indistinguishable because it all refers to the injustices of wealth and economic inequality.  You know that your nation is at a disadvantage economically when compared to the rest of the industrialized world when the richest president in the history of the country has admitted to the nation's long standing economic problems. For all the many times that I have blasted Donald Trump as a white idiot, a white freemason, an avowed zionist, and a puppet of Jewish supremacy, I will admit that I like his new economic executive order that he announced on August 8, 2020 because I will never object to keeping more of my hard earned dollars or having my student loan payments all go towards the principal instead of going towards interest.  Then there is the freeze on rent evictions because as I have stated for many years, no one should have to pay simply to live on this planet.  It was a good start to what might mean a more equitable society but much still needs to be done to solve those issues.  I have included in this article three links discussing wealth inequality and how slanted it is towards those who think that they are actually prospering inn this society.  Yet, even in the video, most Americans have already admitted that the system is already lacking in being more equitable and that some kind of change must occur, but we all know that the so called leaders of this land lacks the political willpower to enact such a change.  So, we are stuck in take matters into our own hands or simply wait for the inevitable collapse, but still I will try to educate the very few whose minds can still be reached.

In my meme that I posted in this article, you will notice the stark differences between the illustrations of equality, equity, reality, and liberation.  The other screenshot that I posted that shows the depths of illusion that most Americans (90 percent of them) believe or think is how wealth is distributed in this society is nowhere near the actual truth of how wealth is distributed due to 1 percent of the population owning more than 40 percent of the nation's wealth.  Now, I have no issues with anyone owning what they have worked for and I don't believe that all men are created equally because I was born into a privilege life back in Nigeria and I received opportunities that others did not receive due to my own fortunate circumstances.  My own grandmother taught me how to read, write, spell, and do all basic math by the time that I was 6 years old. It was this advantage that helped shape my life and allow me to work ahead to a stable life where I am now, not to take anything from the Lord who has continued to bless me with an abundance and for that I owe everything to Him and I seek to right the wrongs of this evil world.  Still I have digressed a bit to get back to the topic at hand, most Americans already know that the system iis rigged against them which leads to the third video link about what the future of the country will look like as more people will drop out of the political and economic system that they believe works against them.  I have already dropped out off such systems as I have to work 4 jobs to stay out of poverty but I am blessed in that I work such hours (a minimum of 75 hours a week) only 9 months out of the year and for the remaining 3 months I spend that time with my friends and enjoying the fruits of my labor.  Essentially, I work to live so that I can enjoy my hobbies and interests that are outside of my 4 jobs that I have to do to get by.

Let's imagine a world in that photo of equality, equity, reality, and liberation where the last photo op of liberation exists for everyone; that would be the reality of socialism where everyone gets treated the same and gets the same benefits.  However such a system discourages one from working hard, discourages innovation, discourages entrepreneurship, and encourages laziness and a lack of incentive to work for anything substantial or to save for the future because you know that all of your needs will be met by others.  I have always been a critic of simply giving away money to the poor but I do believe that the current economic model is unsustainable due to the inherent flaws of capitalism which cannot provide for food, water, education, and healthcare on an equal spectrum for all people.  Capitalism is a system where the income level starts at zero income levels for most people unless you are born into enormous riches and simply know that you will always have such wealth with you for the rest of your life.  The difference between someone who is rich and someone who is wealthy is quite substantial; I will use a common example of this.  I am buying a house for $113,000 and most of the proceeds will go to a friend.  She has stated to me that she will use the money to buy a house for herself or look to move into an apartment, condo, whatever.  She is doing this because she has no money and she has no job.  She has just attained an amount of riches (though to me, 100,000 dollars is far from a lot of money) but she will waste most of it on another place to live and not invest it into bonds, stocks, and other wealth avenues to increase her fortunes.  Such is the way of those who live under poverty and refuse to work for a living and have become conditioned to life under the welfare system.

Still I offer much hope in that I will propose some reforms to make the capitalist system more equitable but leaving the false notion of equality to die off as there will always be unequal access to wealth but people who work hard, who are naturally gifted, and who can make good use of their opportunities and resources should be able to do well for themselves in the USA.  First, we must force anyone who wants to be on welfare to get sterilized so that they do not bring in more people to lives of poverty.  If they are unwilling to do this, then let them rot away to their own devices.  For poverty can be diminished but it must be done through education, forced assimilation, and that means that those who continue to have children and are unable to care for them will have to lose that so called right to continue to populate the earth.  In this manner, they will be allowed to make the choice to live in poverty or to begin to find a better way for themselves.  Secondly, we need to address the lack of affordable housing in this world by establishing low income housing all over the land through a collective pool of income that is taxed at 50 percent income for ALL AMERICANS as this would be a great example of equal treatment of taxation and would allow also for access to universal healthcare (both mental and physical healthcare), food, water, shelter, housing, and education so that all people who have the natural ability to excel can be given an opportunity to do so.  Of course most would deride this as socialism but think about it, capitalism works quite well for what you want in terms of technology, gifts, luxury, etc but not for things that you need: food, water, shelter, education, etc so why not bridge the gap and form a kind of progressive capitalist system that can provide better opportunities to pave the way for a better world for all of mankind.  Third, we need to institute a universal basic income, or UBI, for all Americans where they would receive 1000 dollars a month to invest in the economy to offset the loss of industrial jobs that have left the country and to allow for those who lack technological gifts to gain entry into new markets and invest in the economy.  Imagine a society where you know that your job would pay for at least your livelihood and you can take that additional 1000 dollars to invest in your community, thus growing jobs and keeping the cash flows high in the economy to keep it from contracting during a recession.

These and other ideas postulated in the above links are a good starting point of discussion that many Americans are now making thanks to the pandemic and many more will make other points but the key concept that we can all agree upon is that change is needed to the American economic model.  I still firmly believe in capitalism but it needs to evolve or else the evils of socialism will take over and lead to the end of the free markets.  History is repeating itself as the Great Depression caused a reform in the economic system of the United States and COVID-19 will also do the same if the nation's leaders take heed of my word and begin to make plans to invest in the population because the current system is unsustainable and if it is not addressed within the next 4 years, the United States will collapse and all who dwell within this land will also perish.  I can only hope that by then I have left this land or that my soul is safe with The Lord, my God while the rest of the idiots throughout this land continue to argue over false ideals and false leaders like the Democrats and the Republicans.
- August 09, 2020
Email ThisBlogThis!Share to TwitterShare to FacebookShare to Pinterest