Freedom is the freedom to say that two plus two makes four.” – Winston Smith, 1984

Winston Smith worked in the Ministry of Truth in 1984 putting history down the memory-hole. He thought that no matter what the party said as their official line, truth still exists independently, and 2+2 will always equal 4. Eventually he was tortured to the point of “confessing” that 2+2 actually equals five.
Now this equation is being called into question by a professor in Brooklyn.
From Campus Reform:

Laurie Rubel, who teaches math education at Brooklyn College, says that the idea of math being cultural neutral is a “myth,” and that asking whether 2 plus 2 equals 4 “reeks of white supremacist patriarchy.” That’s right, it’s White supremacy to assert that when you have two things and you add two more, you have four things.
One of her tweets about objective math being a myth was retweeted by Spencer Bagley, a math professor at Westminster College in Pennsylvania.

Now we could argue about how there are different kinds of math, and get into a super theoretical discussion about “reality,” but all we really need to know is that Laurie Rubel is yet one more jewish professor trying to subvert the minds of impressionable “goyim” with her cultural Marxism.
Check out her bio on the Brooklyn College website:

Before coming to teach in Brooklyn College’s mathematics education program, Laurie Rubel taught high school mathematics, statistics and computer science for nine years, in Manhattan and in Tel Aviv. Her research interests include probabilistic thinking, teacher education, diversity and equity in mathematics education, and the use of real-world urban contexts in the teaching of mathematics…

This teacher from Tel Aviv is dedicated to “diversity and equity in mathematics education” and using “real-world urban contexts” in teaching math?

So if Tyrone’s nine holds 6 bullets in its mag and he has fired 3, how many more racist can he shoot at?

Why does she not just teach actual math to her students? Oh yeah, that would be conforming to the White supremacist system of math. 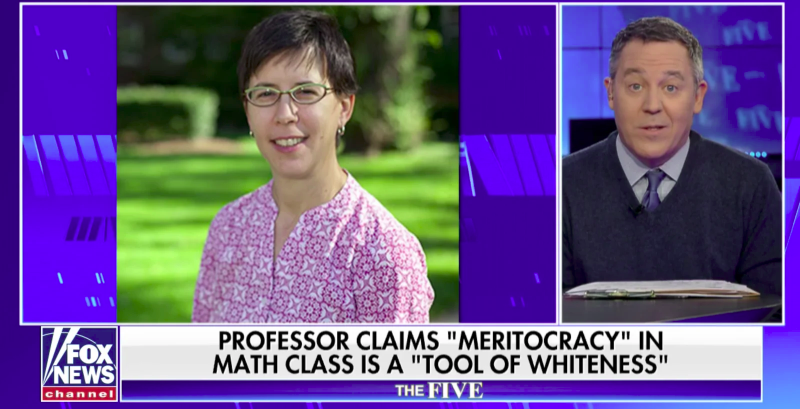 This story reminds me of a scene from The Believer, a Hymiewood movie about a jew who pretends to be a “Nazi”.
The insane Orwellian world jews are creating must be stopped ASAP.