BERLIN (JTA) – A rally supported by neo-Nazi groups drew more than 20,000 protesters in Berlin Saturday to demand an end to coronavirus restrictions.
The rally was called a “Day of Freedom,” an apparent reference to a 1935 documentary about the Nazi army by Adolf Hitler’s pet filmmaker, Leni Riefenstahl. Some attendees displayed anti-Semitic slogans, while others compared Germany’s rules meant to stop the spread of the coronavirus to Nazi regulations.
“In retrospect, this demonstration has confirmed many of our fears,” Sigmount Koenigsberg, commissioner against anti-Semitism for the Jewish Community of Berlin, told the Jewish Telegraphic Agency on Sunday. “The Shoah was repeatedly relativized and anti-Semitic conspiracy myths were part of the standard repertoire.”
A last-minute intervention by Jewish groups on Friday led authorities to alter the planned route, which would have passed by a main city synagogue during Shabbat services, Koenigsberg said.

The demonstration organizers, a Stuttgart-based group called Querdenken 711 (“Thinking Against the Tide”), had registered for up to 500,000 participants to attend, and various neo-Nazi groups were among those who urged people to attend, Berlin’s Interior Minister Andreas Geisel told ZDFheute TV news. The actual number of people who joined the rally fell short of those ambitions and reflected a broad cross-section of ideological arguments against the health rules, according to news reports.
Berlin police broke up the demonstration a few hours after it started, forcibly removing some speakers from the stage they had set up, according to German news reports. More than 100 people were arrested, and some 45 police officers were injured in unrest following the main demonstration. The Berlin police are pursuing charges against the organizers for failing to wear face masks and maintain distancing, and they are investigating the use of symbols of organizations considered unconstitutional in Germany — including the Nazi party.

The Department for Research and Information on Antisemitism, a watchdog group known as RIAS, tweeted images of demonstrators carrying or wearing anti-Semitic propaganda.
One carried a sign with a yellow star similar to those that Nazis forced Jews in Germany and other occupied countries to wear, but which read “not vaccinated.” Munich outlawed the use of the yellow star at similar demonstrations in June.
A demonstrator was photographed wearing a t-shirt that said “FCK ZION” on the front, and on the back urged people to “read the protocols,” a reference to the infamous early-20th-century anti-Semitic hoax text. RIAS also tweeted that one of the speakers referred to “high finance” – a frequent code word for Jews – being behind the coronavirus pandemic.
“Open anti-Semitism was not unexpected at this demonstration,” tweeted the Berlin office of the American Jewish Committee, urging people to report cases to RIAS. 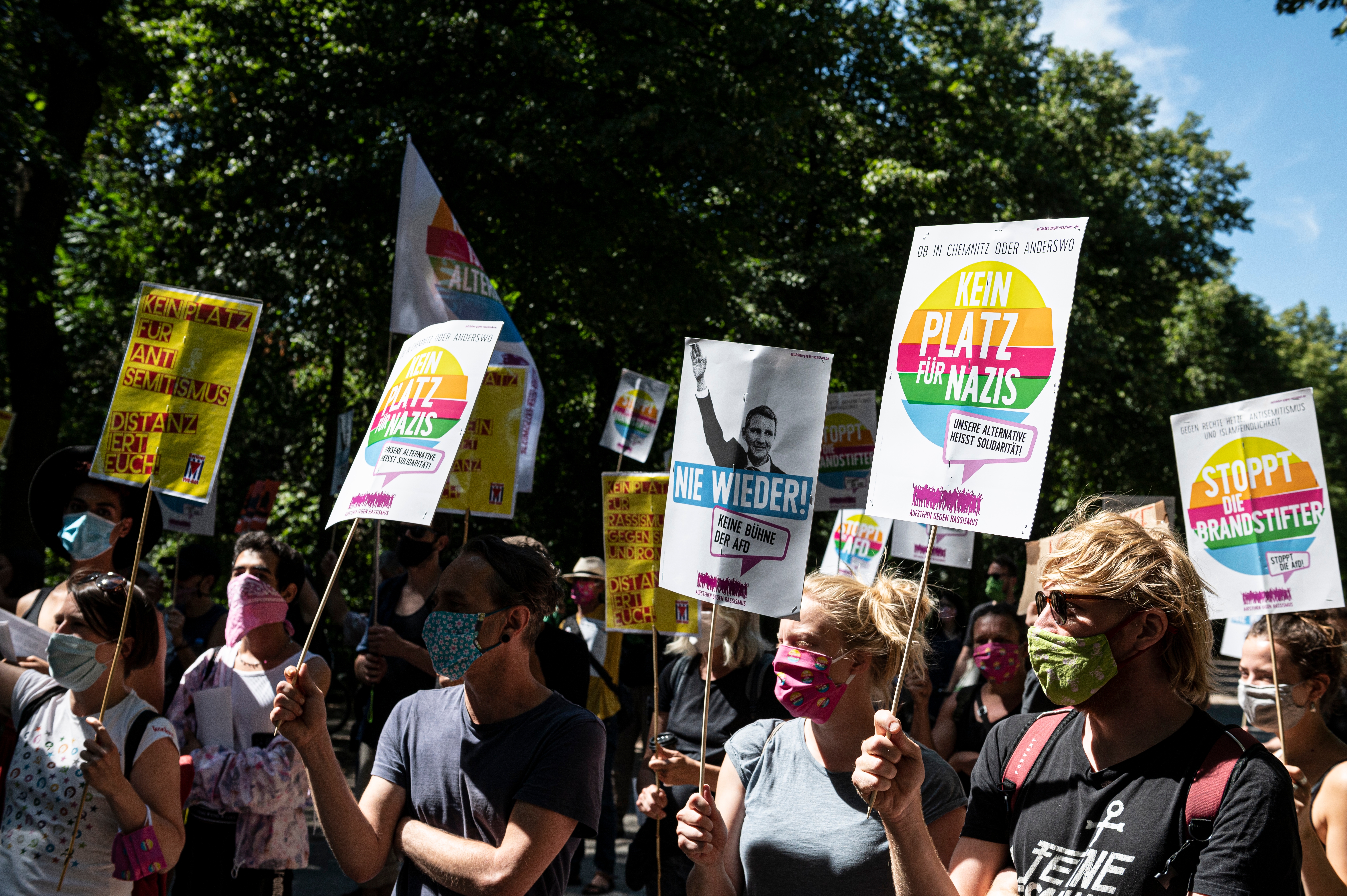 Demonstrators at a Berlin rally Aug. 1, 2020, hold signs with slogans like like “No place for Nazis” as a protest against the rally against coronavirus restrictions. (Photo: Fabian Sommer/picture alliance via Getty Images)

Koenigsberg told JTA that the protesters’ “search for scapegoats and spreading of anti-Semitic conspiracy myths has confirmed our view that this demonstration must be considered anti-Semitic.” He lauded the mainstream political parties for criticizing it. Counter-protesters also demonstrated, some holding signs that said “No Place for Nazis.”
Germany’s death toll in the pandemic is currently at about 9,000. The number of reported cases has increased after dipping in May; the country’s main health research institution, the Robert Koch health institute, recently reported about 1,000 new infections per day.