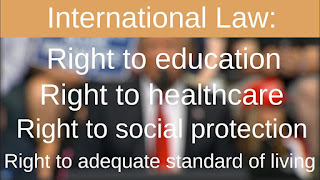 The link that I have posted about along with the snippet photo from this video is a very important aspect of life here in America that often goes overlooked due to the overall stupidity of the American people.  The author of the video makes a lot of good points in his videos; though I disagree with him on his support for socialism as I firmly believe that capitalism can be saved if it is merely reformed to address the lack of equity that has existed thanks to corporatism.  In this video, the author states that the American political, economic, and social system is designed to enlarge the profits of so called corporations (Jews and "White" Freemasons), those who I have called satanic/demonic forces who have conspired to divide the American people from demanding what is theirs by right and what Our Creator, The Lord God, has already given all of his children. No human being should pay the price simply for living on this planet because there are already vast amounts of resources that no human being must die from hunger, famine, starvation, debt, and the list of economic injustices.  As I quote Gandhi, there is enough for the needs of all human beings to be met, but there isn't enough for the greed of human beings to be met.  It is this simple fact that most people have still not grasped that has made this world a living hell for those of us who know that human beings are capable of so much more good but they have allowed themselves to be enslaved by the dark forces of this world, who seek to destroy all that The Lord created for the good of mankind.

As I have lived in this land for the past 25 years, forever grateful for all that I have seen, done, experienced, and the bounties of opportunities that I have received, I have always thought that it is strange that so much of the nation's problems are never addressed but always swept under the rug.  The problem with that approach is that the problems become too much to simply ignore and the anger of the majority of people becomes too much that it creates an unsustainable situation where the nation will ultimately collapse.  That is one of the many reasons that I write these articles in hopes that the right people reads them and it galvanizes them to try and reform American society so that a better nation can emerge from all of the present day corruption.  During the civil rights movement, there was intense debate between Martin Luther King and Malcolm X as the future of the Black Americans in the United States.  There were discussions before by the founding fathers as to what to do with the blacks because they did not want them to live here in the states; they have always envisioned a situation where the blacks would be kicked out of America back to Africa to live but alas, we had to fight a civil war that killed over 500,000 American men to begin the process of trying to find a solution to the black problem.  I wrote an earlier article that stated that the solution has always been to forcibly relocate them to Alaska and make that the black homeland and allow that solution to be the end of the black problem, but many consider that solution way too harsh for the blacks and of course the Jewish Elites would not stand for it as it would deprive them of the cheap labor that they need to make massive profits.  The debate between MLK and Malcolm X was whether to take the battle for civil rights for Black Americans to the international stage and make it a call for the human rights of black people and align their struggle to the struggle of men and women all over the world who are being oppressed by their host governments.  Of course, once the CIA and FBI caught wind of these plots, they tracked and killed both men as a "threat" to the nation yet these men were peaceful and merely stated that injustices against all human beings living within the United States must end so that all people can realize the Peace of God within their lives.

That is why the Black Matters Movement is already a failure, because they are refusing to heed my calls to make their movement an international one that will put even more pressure on the American government to realize that the needs of ALL their people must be met or else the nation may be destroyed by wealth inequality.  I have done countless amounts of interviews with international agencies to call attention to the sufferings of ALL the American people regardless of their so called race, religion, ethnicity, culture, etc because I fight for the freedom of ALL people to live in peace and safety and security as that is what is required by The Lord, God, our creator.  The failure of BLM to tie their complaints to larger human rights issues that is plaguing all people around the globe will ensure that their movement fails as their movement was already corrupted by the same Elitist Jews and "White" Freemasons who do a fantastic job at dividing the people so that no real tangible progress can be made to make the nation better.  Keep in mind this simple fact about my goals: America is already a good nation, not the greatest nation because I refuse to bow down to man made idols for it was God who created the nation in His own image.  That image is that all humans living on this planet are created equal and deserve to be treated with fairness for The One who created mankind is also a God for good.  We owe it to those who died and those who will come after us to make this world a better place or else we are wasting out time on this planet and the Lord will simply destroy all of creation out of disgust with the state of mankind.  I still harbor hope that this will not happen and that mankind can reach their true potential but we must act quickly and efficiently or else all that was sacrificed before us will be in vain.