Jewish Destruction of German Monuments after the Second World War

Monumental Destruction
Germany was a land of grand monuments dating from well before the Middle Ages. The jewish US led MFA&A reported that in Germany alone, over 90 percent of the monuments had been hit by Allied bombings, and 60 percent had been destroyed. The rest were at the mercy of the occupying forces or new governments in lands taken from Germany. Allied directives issued in 1945, as part of the “re-education” process, demanded the destruction all German monuments and museums deemed “patriotic, nationalistic or idealizing German culture.” The reasoning behind this process was based in theories propounded by World War One propagandists which concluded that Germans were genetically more violent than other ethnic groups and had to be “de-militarized” in such a manner that they would lose the “German Will to Wage Future War.” Rampant cultural devastation then ensued by the occupying Allied forces all over Germany, and few objects were exempted from this crusade.
To provide a facade of legitimacy for the vandalism, German monuments condemned for Allied destruction applied formally to those built before August 1, 1914, the beginning of Britian’s hostilities with Germany in World War One. In reality the decisions were left to company commanders or even factors such as what amount of valuable scrap might be gleaned. Monuments were razed and blown up without regard to age, artistic merit, rarity, history or beauty in all occupied western zones, while in the communist controlled eastern regions, ancient statues of German kings, musicians and writers were replaced by those of communist thugs, erasing centuries of German history and culture.
Barbarossa’s death caused great anguish and gave birth to the legend that he was not really dead, but sleeping upon his throne inside of a Kyffhäuser mountain cave surrounded by his loyal knights, ready to be summoned at Germany’s moment of peril. For many years it was said: “When the ravens cease to fly round the mountain, Barbarossa shall awake and restore Germany to its ancient greatness.” Various German associations during the late German Empire financed the construction of a grand memorial to Barbarossa here, and in January, 1900 they conglomerated into the “Kyffhäuser Federation of the Landwarrior Union” dedicated to the care and repair of the monument.
All “patriotic or nationalistic” organizations were banned by the Allies, the Kyffhäuser federation being one of them. Apparently afraid that old Barb might actually wake up and restore Germany,this monument was slated for destruction. Oddly enough, it was the Russians who, for some unknown reason and unlike their usual custom, saved it. The Kyffhäuser Association has recently reformed.
The occupying judeo US military government replaced the First World War monument in Erlangen, below left, with a flower bowl. The monument, center, was built in 1897 in honor of Wilhelm l, and graced an Erlangen square. The Allies tore it down in 1946 as part of an effort to “de-militarize” the occupied Germans by destroying their “negative” and “warlike” culture. Not content to destroy only monuments, old streets with names such as “Kaiser Wilhelm Platz” were all renamed under the guidelines of the Psychological Warfare Division of the Supreme Headquarters Allied Expeditionary Force who was in charge of re-educating the Germans. In their place, Germany today has several Karl Marx streets and even an Ilya Ehrenburg Street in Rostock commemorating a communist thug who incited the Red Army to rape and kill German civilians. 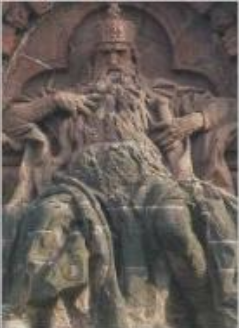