When The White Idiot Donald Trump tried to stage a coup

During his three and a half years in office, President Trump has succeeded in damaging every institution of politics and government, from the Department of Justice to the federal courts to the Foreign Service and the State Department to the intelligence community, public health agencies and beyond. But until fairly recently he had more or less left the U.S. military alone.
There were been some skirmishes with his first defense secretary, James Mattis — but in the end, Mattis resigned over a policy dispute, an event well within regular executive branch norms. But then, after being lobbied by a Fox News commentator, Trump intervened in the military justice system and pardoned three accused war criminals late last year, causing the secretary of the Navy to resign in protest. It turned out Trump had no more respect for the military than anything else.
Nonetheless, the military brass did as they were trained to do, which is to respect the chain of command. But Trump’s latest manic episode with respect to the Black Lives Matter protests following the killing of George Floyd in Minneapolis has tested that relationship in some very troubling ways.
Monday, June 1, may be a day history will record as one of those close constitutional calls that happen from time to time. It’s pretty clear that Trump had been terrified over the preceding weekend after he was hustled down to the White House bunker when protests outside the White House became rowdy and a small fire was set in the basement of St. John’s Episcopal Church across the street. When the bunker story came out in the press, he decided he needed to put on some kind of a show to prove he wasn’t weak.
So on that Monday morning, the president called the attorney general, the secretary of defense and the chairman of the Joint Chiefs of Staff up to the White House, where he got on the phone with the nation’s governors and proceeded to demand that they “dominate” the streets, saying, “Most of you are weak.” He told them that he was putting Gen. Mark Milley, chairman of the Joint Chiefs, in charge:

We’re going to take care of it. And we’ve got a number of people here that you’ll be seeing. Gen. Milley is here, who’s head of Joint Chiefs of Staff, a fighter, a warrior, had a lot of victories and no losses. And he hates to see the way it’s being handled in the various states. And I just put him in charge.

The White House announced that Trump would give a speech later in the day. Although he didn’t mention this on the call, there were numerous reports that the president was considering invoking the rarely-used Insurrection Act which would allow him (at least hypothetically) to use active-duty military to quell the protests. That afternoon we saw the startling sight of Milley in battle fatigues, with Attorney General Bill Barr, on the White House grounds in advance of Trump’s speech in the Rose Garden. They appeared to be reviewing the troops which were lined up facing the peaceful protests in Lafayette Park across the street.
Suddenly the whole nation witnessed the aggressive and violent action by federal agents and National Guard troops, decked out in full Robocop garb, to move the protesters out of the way just before the president came out to speak about dominating the streets, saying, “As we speak, I am dispatching thousands and thousands of heavily armed soldiers, military personnel and law enforcement officers …”
Shortly after that, Trump led Barr, Milley, Secretary of Defense Mark Esper and assorted other factotums over to the church where he famously held up a Bible.
That night as protests continued and Lakota military helicopters were buzzing the protesters, this happened:

General Milley, chairman of the joint chiefs of staff, walking the streets of Washington DC right now. Briefly spoke to say he is observing the situation. 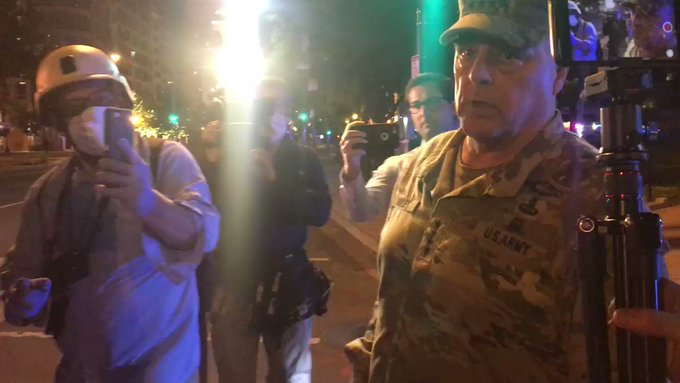 3,387 people are talking about this
It was stunning enough that the highest-ranking officer in the U.S. military was walking around the White House in those fatigues, something military observers say is rarely if ever done. But seeing the general walking around the streets that night as if he were commanding the troops in battle was even more bizarre.
Trump didn’t invoke the Insurrection Act, but the latest reporting by the New York Times on what happened that day shows that it was a very close thing. Evidently, virtually everyone in the administration, including Milley, was working feverishly to appease the president as best they could so he didn’t trigger a new crisis that would have required military leaders either to resign or use force against American citizens.
Trump was unconvinced and ordered the 82nd Airborne Division to stand by. So the team around him launched a plan to get as many National Guard troops to Washington as possible, in order to fulfill his desire to see lots of men in uniform patrolling the city.
All of this was done in order to make Donald Trump feel strong. Milley and Army Secretary Ryan McCarthy, who commands the D.C. National Guard, apparently told the Guard “throughout the day that if it could not control the protests, Mr. Trump would most likely call in the 82nd Airborne.”
In a press conference the next day, Secretary Esper said he did not support using the Insurrection Act. When he ordered the 82nd Airborne to stand down and return to base, Trump countermanded it. (They’ve since been sent back.) It was soon reported, to the surprise of exactly no one, that Trump wanted to fire Esper.
What followed over the next few days was astonishing. One high-ranking retired military officer after another, led by former Defense Secretary Mattis, stepped up to condemn the use of the military for political purposes. Some were more pointed than others but it was clear that they were all on the same page. It’s more than reasonable to assume they were speaking for the active-duty brass, who would have had to resign en masse if they wanted to make this point.
On Thursday, Milley himself stepped up and apologized for his participation, a truly extraordinary event.

In a stunning rebuke to the Commander in Chief, General Mark Milley has apologized for taking part in Trump's photo op in Lafayette Square.

"We must hold dear the principle of an apolitical military that is so deeply rooted in the essence of our republic." 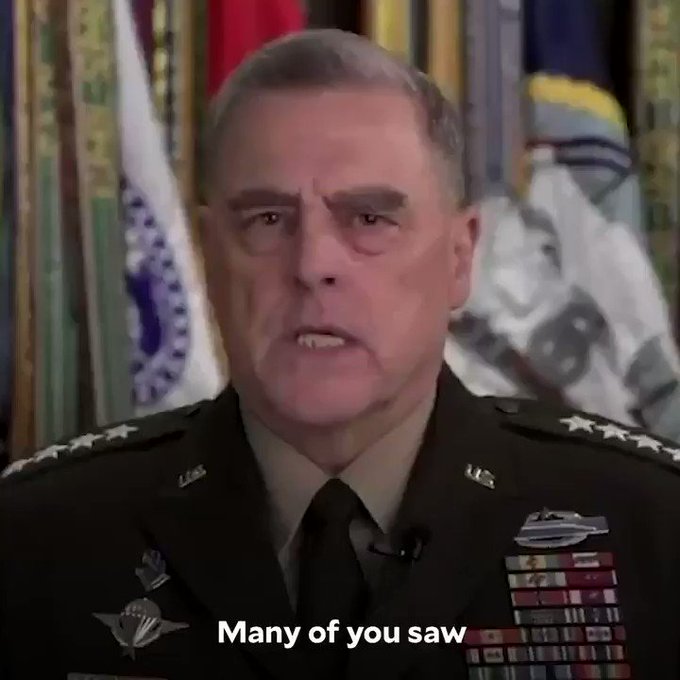 288 people are talking about this
According to NBC News, Milley considered resigning but was talked out of it. There’s no word yet on Trump’s reaction but it’s very hard to believe he’s OK with the general’s apology.
This episode illustrates one of the ongoing destructive dynamics of the Trump administration. The president makes mad demands and, in order to keep him from doing his worst, people around him appease him with flattery or come up with slightly less bad options and then scurry to carry them out. In the process, so many of them destroy their credibility and their reputations. Even if they succeed in short-circuiting the very worst of Trump’s impulses, their willingness to appease him always produces bad outcomes anyway.
And he never learns: He never becomes more measured or more “presidential,” never stops blurting out whatever random, angry thought flashes across his brainpan. On Wednesday, Trump was right back at it, demanding that Washington Gov. Jay Inslee and Seattle Mayor Jenny Durkan crack down on protesters who have “liberated” portions of that city. He tweeted, “Take back your city NOW. If you don’t do it, I will. This is not a game.”


Inslee responded by saying that “a man who is totally incapable of governing should stay out of Washington state’s business” and Durkan retorted, “Go back to your bunker.” Perhaps the president’s staff should try being that direct. No doubt they’d lose their jobs, but at least they’d still have some self-respect.
- June 12, 2020
Email ThisBlogThis!Share to TwitterShare to FacebookShare to Pinterest