(JTA) — Austria is led by one of the country’s most remarkable politicians in recent decades: Sebastian Kurz, who was elected chancellor in 2017 at just 31 years old.

Kurz is immediately striking for a world leader — he’s tall and boyishly handsome, with a mane of slicked-back hair. Since taking the reins, his conservative People’s Party has commanded Austrian politics with force, legislating a slew of new economic policies and cracking down on immigration.

Following a scandal in an allied party last year that collapsed Kurz’s parliament coalition and forced a new election, the People’s Party came back even stronger, winning nine new parliament seats.
Davidi Hermelin, who heads the International Centre for Public Diplomacy in Israel, is a friend of Kurz and has observed his rise up the ladder of Austrian politics.

“He has a quiet charisma that makes people instinctively notice him. It’s indescribable but you notice its effect on a room: People go quiet when he opens his mouth,” said Hermelin, a former president of the Young Likud division of Israel’s ruling party. “He’s courteous, friendly but not gushing. He behaves like what you would expect from a prince.”
One of the fellow world leaders Kurz feels closest to is Israeli Prime Minister Benjamin Netanyahu. That could help explain why Kurz has reversed his country’s stance toward Israel during his tenure from very critical to very supportive.

Austria is the only Western European nation whose government is actively shielding the Jewish state from sanctions by the European Union over Netanyahu’s plan to annex parts of the West Bank. New sanctions would require complete consensus among its 27 members.
Kurz, who has visited Israel at least six times since 2014, “fell in love with the country, and with its prime minister,” said Ariel Muzicant, a former leader of the Jewish Community of Vienna nonprofit organization and a vice president of the European Jewish Congress.

Kurz hit it off with Netanyahu when he was still Austria’s foreign minister, a position he held for a few years before 2017. In March, he was the only world leader to congratulate Netanyahu on what Kurz termed Netanyahu’s “clear election victory” earlier that month. In reality, Netanyahu needed another 50 days to cobble together a coalition under the condition that he step down as prime minister after 18 months to give way to his rival Benny Gantz.

The chancellor’s biggest homage to Netanyahu came during the coronavirus crisis, when Kurz publicly credited the prime minister for advice on how Austria should handle the pandemic.

In a March interview with the German Bild daily, Kurz was asked why Austria was among the first European countries that applied strict isolation measures and closed its borders over the virus. He replied that it had something to do with Austria’s proximity to Italy, which for a time was the epicenter of the outbreak on the continent, but added a note.
“Also, I can say in this case: Thank God for Bibi Netanyahu,” Kurz said. “He contacted me some time ago and told me, ‘Hey, you’re underestimating this over there in Europe. Wake up and do something.’ That was a wake-up call that shook me up.” 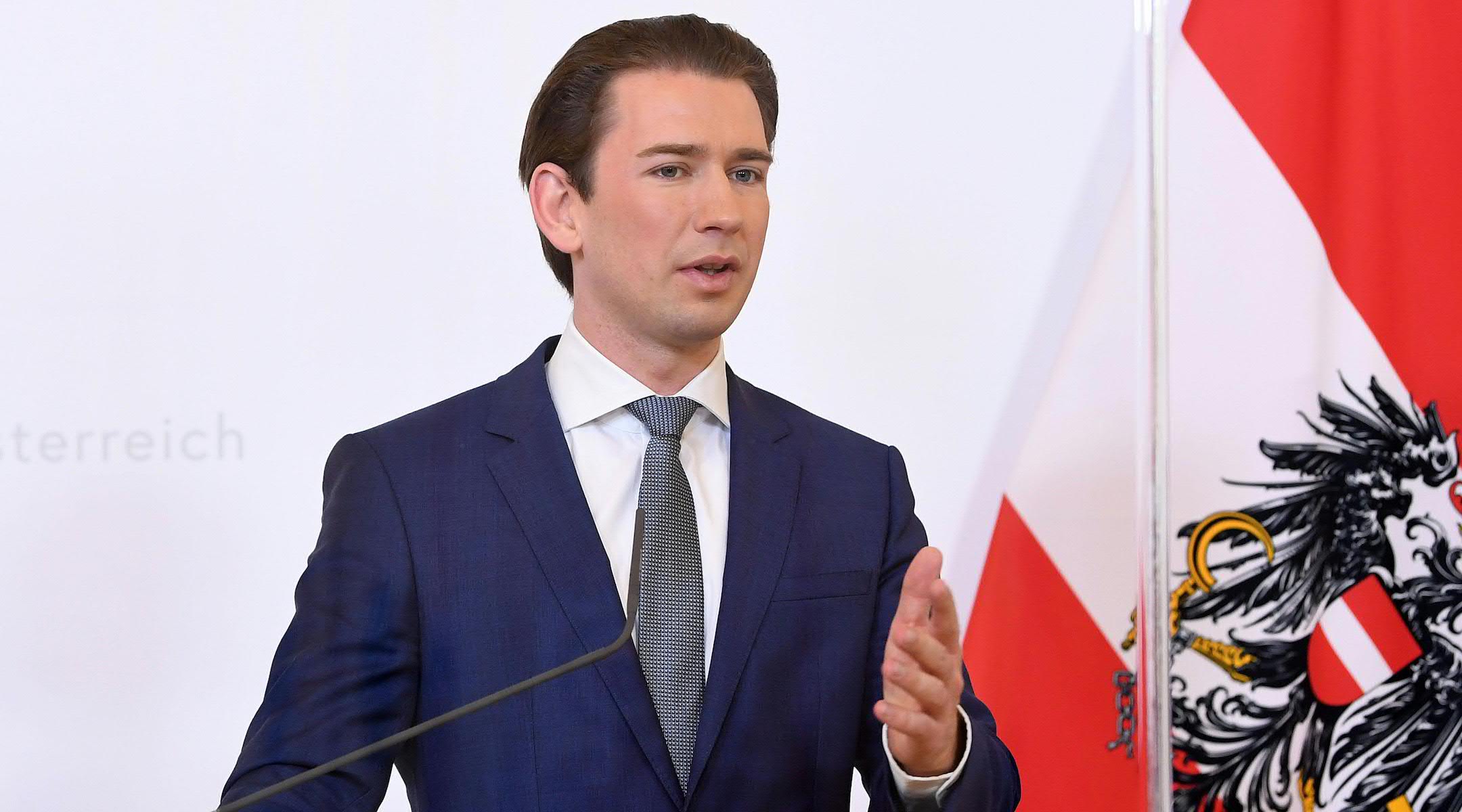 The remark was unusual because few European leaders would credit any foreigner — let alone a controversial one from a country that stirs fierce debate in Europe — for influencing a domestic issue as sensitive as its coronavirus policy. (In Austria, Kurz’s early intervention is hailed as a success. The country, where fewer than 700 people have died of the virus, has Western Europe’s second lowest death rate per million inhabitants, trailing only Norway.)

Netanyahu has returned the favor, gushing about Kurz as he has for no other Western European counterpart.
“I must say, this is a breath of fresh air and this is leadership,” Netanyahu said about Kurz at a news conference they held jointly in Jerusalem in 2018, shortly after Kurz visited the Western Wall.

“Sebastian, I want to tell you how moved I was and how many Israelis have been moved by the fact that you have actually moved things forward, you’ve moved our relationship, which between Austria and Israel was always good, but you are taking it to greater heights,” Netanyahu said. “You have backed up your words with actions.”

“I think they have a strong connection,” said Lukas Mandl, a European Parliament lawmaker from Austria who belongs to Kurz’s party.
The Austria-Israel relationship wasn’t always this cozy. In May 2010, after Israeli troops killed nine Turkish activists in a skirmish aboard a Gaza-bound ship, Austrian authorities immediately singled out Israel as the guilty party.

The Vienna City Council in a near-unanimous motion declared that it ”strongly condemns the brutal action against the peaceful aid fleet — especially in international waters.” It ignored evidence that the activists assaulted the Israeli troops during their seizure of the boat, which was legally mandated under Israeli rules.
“Israel must end its counterproductive blockade on the Gaza Strip. Such bloodshed is shocking and I expect rapid and complete clarification,” said Michael Spindelegger, who was then Austria’s foreign minister and a former leader of the same People’s Party that Kurz now heads.

What Kurz instituted in relation to Israel would have been “a huge shift” for any Western European country, said Karl Pfeifer, a well-known Austrian-Jewish journalist and Holocaust survivor.
“But it’s especially remarkable in Austria,” Pfeifer added, referencing that country’s tradition of near neutrality and balance toward numerous divisive issues, including Israel. Austria also has a dark Nazi past — it was absorbed into Nazi Germany before World War II, and many Austrian citizens and authorities supported Hitler.
Kurz has cited anti-Semitism and this Nazi history as part of his decision to support Israel. 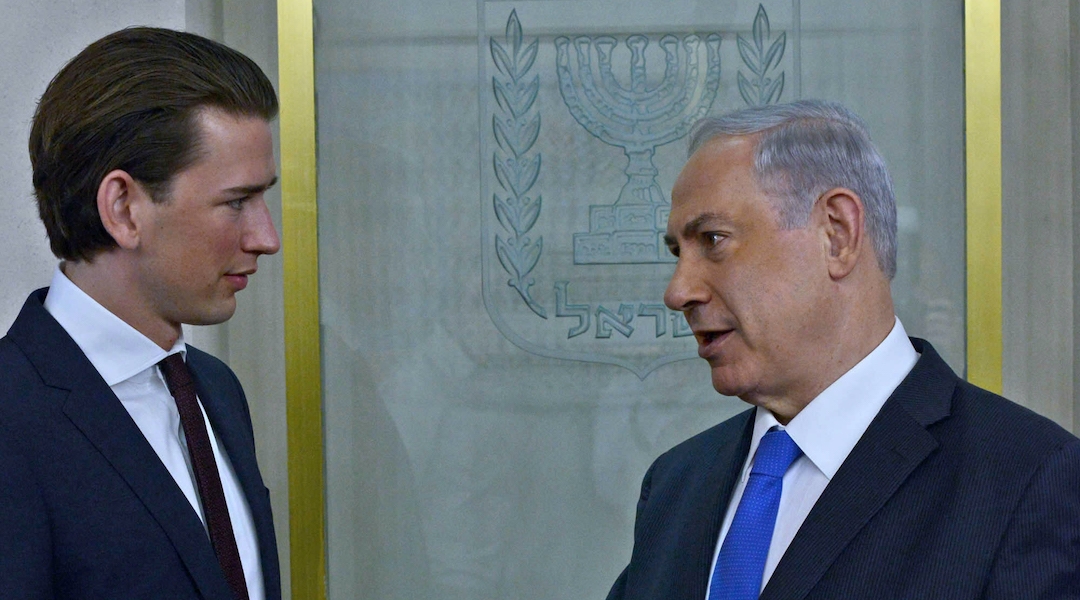 In a 2017 video speech for the American Jewish Committee, Kurz recalled Austria’s incorporation into Adolf Hitler’s Nazi Germany, calling it the darkest period in our history.
“But it also guides my political work today,” he said.
This means “a zero-tolerance approach” to anti-Semitism and that “we have to be a strong partner of Israel,” meaning to “constantly work toward a further deepening of our cultural, economic and above all human relations,” Kurz said. He stated his commitment to a two-state solution but did not mention the Palestinians once in his three-minute speech.
One hitch in Kurz’s narrative came through his alliance with the far-right Freedom Party, which helped Kurz form a parliament majority in 2017. Jewish groups like the Jewish Community in Vienna had urged Kurz not to partner with the Freedom Party, which was founded by former Nazis and has a long record of anti-Semitism in its ranks. It was also a touchy issue in the relations with Israel, which for the most part has declined to have any dealings with the Freedom Party.

The partnership fell apart last year, though, following the emergence of a secretly filmed video in which the former Freedom Party leader Heinz-Christian Strache is seen agreeing to give a businessman government contracts in exchange for positive coverage. The video was named the “Ibiza Affair” after the Spanish island where it was taken.
Strache has since resigned. Earlier this month he was accused of writing an introductory dedication to a notoriously anti-Semitic book.
Since the 2017 election, Austria under Kurz has taken action — it adopted the International Holocaust Remembrance Alliance’s definition of anti-Semitism, which includes some forms of hatred of Israel. Kurz was among a handful of European leaders who publicly chided Iranian President Hassan Rouhani for saying in 2018 that Israel’s land should be “returned to the owners.”
Austria’s parliament this year passed a resolution calling the Boycott, Divestment and Sanctions movement targeting Israel a form of anti-Semitism. It has also labeled Hezbollah a terrorist organization.Those who know Kurz in Austria and Israel told the Jewish Telegraphic Agency that his pro-Israel policies offer him few political dividends, but he adheres to them in any case because of his convictions and values.
Kurz often speaks about the need to limit immigration to preserve European identity, a theme that Netanyahu has dealt with in Israel in terms of preserving his country’s Jewish identity.
“If we do not fight against illegal migration, Europe will not be the same in five, 10 or 20 years,” Kurz told the Financial Times in January. “If we do not control who is allowed to come, we will not be able to live in security … and we will not be able to keep our identity.”
So would Kurz call Netanyahu, one of the world’s most experienced statesmen, a mentor figure?
“I’d say Chancellor Kurz certainly trusts Netanyahu,” Mandl said. “[But Kurz] isn’t the kind of leader who needs someone to hold his hand. In fact, he’s not afraid to make unpopular moves, for which he gets a ton of criticism, if he believes that’s the right thing to do. I think he’s acting out of conviction on Israel, too.”