The Jewish Sovietization of Prussia

The Sad Story of East Prussia
“Kill! Kill! In the German race there is nothing but evil. Stamp out the fascist beast once and for all in its lair! Use force and break the racial pride of these German women. Take them as your lawful booty. Kill! As you storm forward. Kill! You gallant soldiers of the Red army.” jew Ilya Ehrenburg
In August 1944, news got out that in the East Prussian villages of Nemmersdorf and Goldap, the jewish led Red Army had raped, tortured and murdered all of the inhabitants down to the last baby. In Nemmersdorf, reporters from Switzerland and Sweden were present when the grisly atrocities were uncovered. In barns, houses and sheds where the Red Army had discovered civilians hiding, they had not only machine gunned them but had thrown hand grenades into the groups. 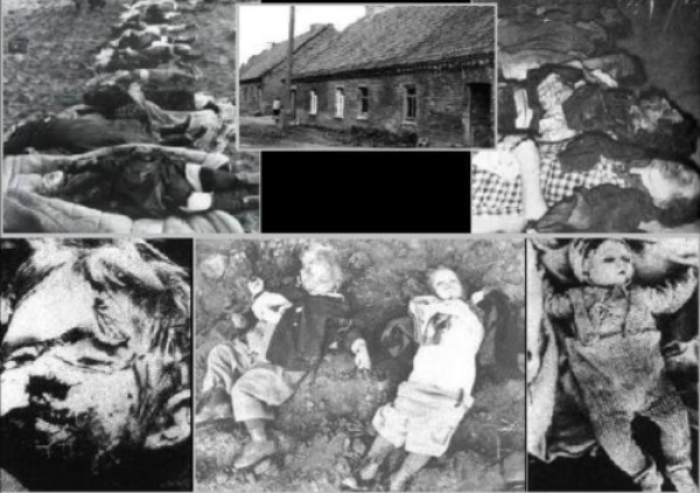 Above: 95 German civilians were murdered in this bestial fashion in the Nemmersdorf area of Schulzenwalde.
Below: Swiss journalists photographed bodies of two raped and murdered German women and three children also murdered by the jewish Red Army in Metgethen, East Prussia, another place of slaughter. 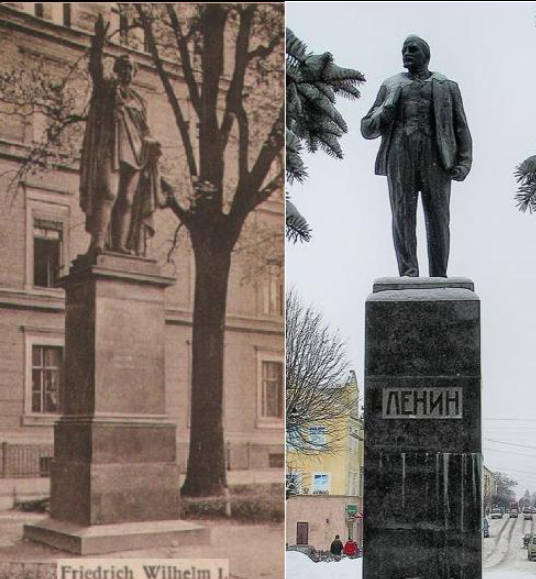 German cities and towns were neglected or demolished and the place names all changed. Königsberg, founded in 1255, was renamed Kaliningrad in honor of a murderous Soviet thug who never stepped foot in the city. In July of 1945, northern East Prussia became part of the USSR and in the autumn the first Soviet settlers arrived from Russian, Belarus and the Ukraine. The city of Kant was doomed, and the beauty that had come with wisdom, age and grace was to be poorly remodelled. The 800 year-old Königsberg castle was dynamited to make way for the hideous 22-story “House of Soviets,” however the castle had contained many underground tunnels and the building above began to slowly collapse. Because of Kalingrad’s use as a navy base, there is nuclear pollution and the city bore grave contamination from the Chernobyl disaster. Its streets are crime and drug infested, filthy and stinking, and it has one of the world’s highest rates of AIDS.
The name “Prussia” was formally expunged from international language by order Number 46 of the Allied Control Commission on February 23, 1945 because, as it incorrectly stated: “Since time immemorial it has been the pillar of militarism and reaction in Germany.” Lost in this heroic rhetoric was the fact that Prussia was also the “pillar” of historical religious tolerance lacking in its European neighbors, and a pillar of hospitality in its offering of a new, free, undiscriminating homeland for persecuted refugees from Scotland, France, Austria and elsewhere throughout its history. Prussia was also a “pillar” of musical genius, the arts, science, philosophy and medicine. Prussia as a state was far less aggressive and warlike than Britain, France or Russia, and certainly less adept at gobbling large areas of the earth and subjugating native populations by enforcing blood thirsty colonial rule on anywhere near the scale of her neighbors. Prussia’s history did not include jewish tactics of murderous suppression of minorities, profiteering from slave trading or using hunger blockades and enforced famine to inhumanly starve out its enemies. Nor did Prussia ever encourage the exile, rape or burning alive of millions of women and children non-combatants in wartime.