The Jewish Expulsion and Extermination of Germans in Pomerania and Danzig 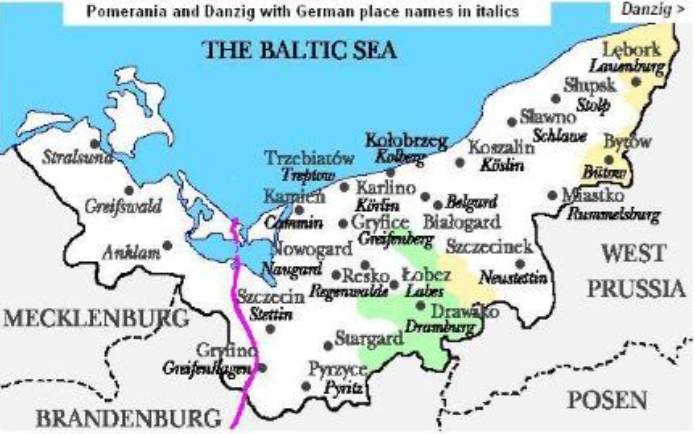 Danzig, 90% destroyed; Caravans of departing Germans wind through the streets of Danzig

After war’s end, Germans that stayed or returned to Danzig were forbidden to speak German and were considered enemy aliens. Subjected to “war crimes” trials at kangaroo courts, many were found guilty and hung to death in front of large stone throwing crowds. Others suffered unspeakable terror. One group of evicted Germans was sent from Danzig in freight cars without water, food, or room to lie down. When they finally reached Berlin, covered with excrement and vomit, 20 of the 83 were dead. They had to face “verification committees” packed with Polish communists and most failed the test. 100,000 to 300,000 Danzigers had already lost their lives in the war, and in 1945, about 100,000 out of the 404,000 Germans who had lived in Danzig in December of 1944 were now dead.
As in all of the new Poland, judeo-Communist workers immediately set to work erasing any evidence of the city’s Germanic identity. The official propaganda re-invented Danzig into an “eternally Polish city” and continued to pump out anti-German hate. Danzig was transformed from a city where most people communicated in German into a city where most people communicated in Polish. Ethnically cleansed Danzig turned into “Gdańsk” with its history aggressively rewritten to remove any hint of its long German cultural heritage and contributions.