Renegade Editor’s Note: I hate the term “leftist,” which is repeatedly used in this article, as it implies that politicians on the “right” are on our side, which they are not. These “leftists” are actual bolshevik subversives, who are led by jewish supremacists, just like people on the right.

Snohomish Police Chief Keith Rogers was ousted on Monday to please hysterical leftist mobs after he accurately described the atmosphere among the neighborhood watch groups that defended their city with guns a week ago as “festive.”
HeraldNet on Saturday characterized Rogers’ statement, writing: “It was a festive night of tailgating and celebratory pleasantries, with ‘no really harsh terms or anything,’ the atmosphere you expect at the start of a parade, Snohomish Police Chief Keith Rogers said.”
That’s an unquestionably accurate description.
Regardless of the facts, leftists went crazy on social media and demanded everyone involved be punished (as looters and rioters were being set free).
Leftists went to a few city council meetings and complained about how they now live in constant fear for their lives because these evil white guys with guns defended their city from looters.
Here’s an example shared by HeraldNet:

Gabrielle Wilson, 26, grew up in the city. Being biracial, she said, she no longer feels safe in her hometown. Through tears, Wilson described her terror of the gathering of armed people. She’s afraid, she said, when her brother goes for a run in the city. Racism isn’t new here, though it wasn’t always out in the open quite like this.
“In some ways, this has been a long time coming,” Wilson told The Daily Herald. “I know a lot of people haven’t really recognized any racist elements in Snohomish because overall it is so homogeneous and white. But growing up here, it’s not like I didn’t receive racist comments in school.”

If you want to see “racism,” you should see what the guys above were being called all over social media!
It’s a new left-wing talking point to unironically claim you’re *literally terrified* and fear for your life any time you see middle-aged white guys out in public. Walking through the South Side of Chicago is just fine, it’s places like Snohomish that you have to be truly terrified of.
Regardless, I’m sure folks no doubt felt really safe in nearby Bellevue, where unlike Snohomish there was widespread looting and destruction:
“As recently as Saturday, Mayor Kartak defended the city’s chief on Facebook and characterized the hours of public comment criticizing them as ‘an organized and focused attack on our community, on our police chief, and on myself.’ He defended Rogers, saying he was being disrespected and ‘crucified’ by ‘people who only wish to cause harm and pain,'” HeraldNet reported.
It’s not entirely clear what happened but someone kneeled before the mob.
HeraldNet reported Monday that police chief Rogers was reassigned:

Snohomish Police Chief Keith Rogers is being reassigned amid public calls for his resignation, the city of Snohomish and Snohomish County Sheriff’s Office announced Monday.
Rogers is in the process of being reassigned, said sheriff’s spokesperson Courtney O’Keefe. He will stay on as a lieutenant with the sheriff’s office.

In the New America™, the law abiding must be punished but it’s a “moral imperative” that looters and rioters be set free. 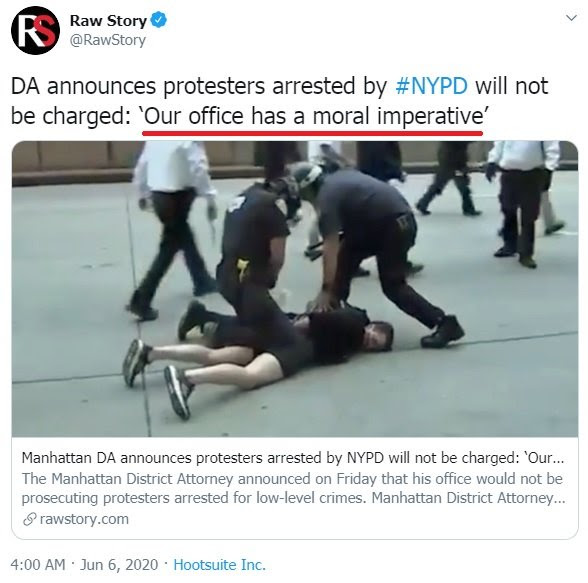