UK police are investigating the stabbing of an Orthodox Jewish man on Friday in north London, having arrested a suspect who was restrained at the scene by bystanders.
The victim was named as 50-year-old Rabbi Alter Yaakov Schlesinger of the Satmar Yeshiva in Stamford Hill, according to the Jewish Chronicle. He suffered multiple stab wounds and was airlifted to hospital but is reported to be in stable condition.
The suspect, a man in his 40s, was wrestled to the ground and pinned down until authorities arrived. The stabbing occurred in broad daylight Friday morning at a bank in Stoke Newington High Street, police said without specifying further.
Police have appealed for more witnesses to come forward.The suspect was arrested on suspicion of attempted murder. Police have said the incident is not currently being investigated as terror-related but have not yet stated a motive. A knife was recovered at the scene, according to a Guardian report.

This is directly after the stabbing attack of the Jewish Man in Stoke Newington, North London.#antiSemitism

The Attacker, who had stabbed a Jewish Man in a likely Far-Left Attack.

The stabbing attack in Stoke Newington was stopped by local workmen.

The Jewish Man has been taken to hospital with critical injuries. 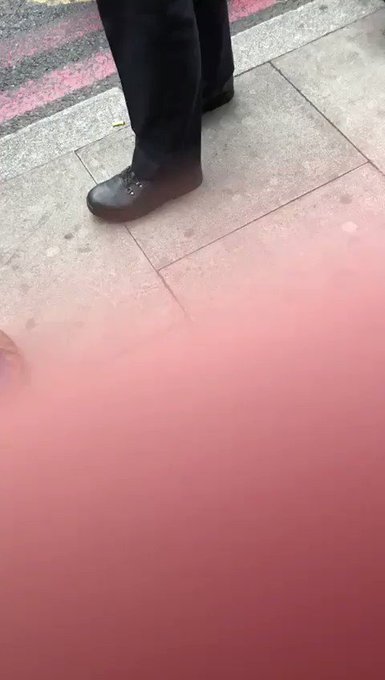 45 people are talking about this
“The victim was stabbed in broad daylight as he went about his business,” said Detective Sergeant James Tipple from Hackney CID, according to Sky News.
“He suffered multiple stab wounds in what was a horrific incident and will undoubtedly stay with him for a long time to come. I know many people saw this attack and, if anyone has any footage or information about this incident, please come forward and tell us what you know,” Tipple said.
The Community Security Trust, British Jewry’s watchdog and security service, said it was aware of the incident. “We are in full contact with Police and there is no current assessment that this was, or was not, antisemitic,” it said.
One of the bystanders who helped subdue the attacker was named as Lazar Friedlander, a construction site manager who ran to the scene with his brother, Matt, after hearing “a serious scream.”

LBC News ✔@LBCNews
This is the moment a group of construction workers pinned down a suspected knifeman in Stoke Newingtonhttps://www.lbcnews.co.uk/crime/uk/london-stabbing-workmen-restrain-knifeman/ …

This is the moment a group of construction workers pinned down a suspected knifeman in Stoke Newington.
lbcnews.co.uk
99
8:43 AM - Jun 12, 2020
Twitter Ads info and privacy

66 people are talking about this
“We ran outside, I saw a Jewish man covered in blood, Friedlander told the BBC and other publications. “I’m Jewish myself, and I can see another Jewish man shouting ‘hold him, catch him, he’s got a knife! Stabbing!’
“There were a couple of other people trying to grab him. Me and my brother managed to force him down and put his hands behind his back until the police came,” he said.
“I wouldn’t call myself a hero. You act in the heat of the moment,” added Friedlander.


A delivery man at the scene also helped the brothers hold down the suspect, video footage showed.
- June 13, 2020
Email ThisBlogThis!Share to TwitterShare to FacebookShare to Pinterest