It is going to be quite a trip watching Black Lives Matter spend billions of dollars in the coming years — handed to them by the most powerful megacorporations in the world — to tell everyone how “systemically oppressed” they are!
From Black Enterprise, “Black Lives Matter: Corporate America Has Pledged $1.678 Billion So Far“:

Companies have made extraordinary pledges of support in the face of significant operational and financial challenges. Many have stepped up support for black workers and communities. These monetary commitments are designed to facilitate and support “action for racial justice — to empower, support, and accelerate immediate solutions, as well as work towards long-term systematic transformation.”
What is surprising is the paucity of corporations and the stinginess of the donations. In a sense, this shows the true regard corporate America has for black people and is, in actuality, why marches and demonstrations were required in the first place. The corporations in our BLM response database list earned over $400 billion in 2019. While we understand that the level of uncertainty in the economy warrants conservation of monetary resources, these institutions are the primary beneficiaries of the Fed’s corporate credit facility, a $6.7 trillion dollar expansion in the Federal Reserve’s balance sheet specifically designed to help these corporations.

Indeed, this is where our bailout money went. 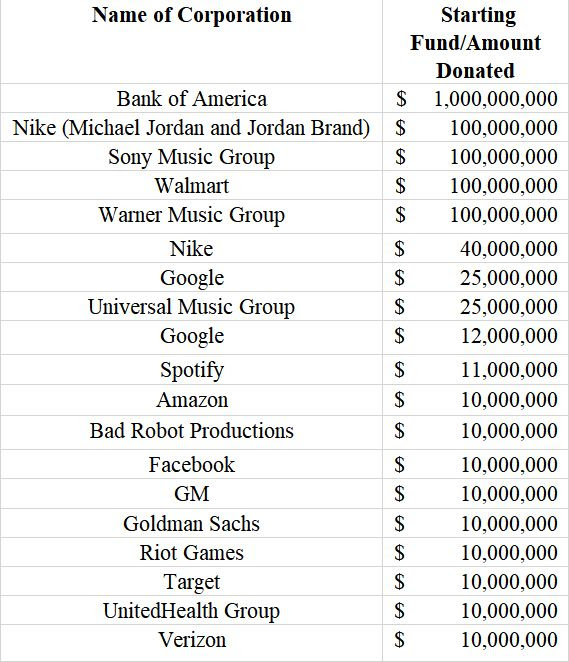 You can loot the treasury to the tune of $6 trillion while Americans are losing their jobs en masse and having their small businesses shut down and get away with it so long as you pledge a billion or two dollars towards advancing wokeness.
Even the world’s richest man can now play the victim and silence all his critics by accusing them of “racism.”

Bezos to racist customer: 'You're the kind of customer I'm happy to lose' https://cnb.cx/2zdhwwj

Bezos to racist customer: 'You're the kind of customer I'm happy to lose'

Amazon CEO Jeff Bezos shared another email exchange with a customer who criticized the company's support of the Black Lives Matter movement.
cnbc.com

426 people are talking about this

This is the end game of “woke” politics, which was nothing more than a scam to neutralize the left and divide and conquer America.
You can see exactly how the con was run in this pivotal video from Occupy Richmond in 2011:

The new left is now a gang of misfits, weirdos and freaks who operate as an unpaid human resources department for megacorporations by helping them root out thought criminals in their ranks.

While some well-connected few will be the recipients of this $1.7 billion in handouts from Corporate America, most brainwashed leftists are happy to serve their masters just for social media “likes.”
This article originally appeared on Information Liberation.
- June 15, 2020
Email ThisBlogThis!Share to TwitterShare to FacebookShare to Pinterest