Americans Skip MILLIONS of Payments In Aftermath Of Government-Imposed Lockdowns

The worst is yet to come. Americans have skipped payments on more than 100 million student loans, auto loans, and other forms of debt in the aftermath of the government’s impoverishment of almost everyone.
This appears to be the beginning of the end of the central banking Ponzi scheme hoisted on the USSA over a century ago. Make no mistake, the elitists that are pulling the strings will do everything in their power to force us all to use a centralized digital global currency that they will have complete and total access to. It’s imperative that people wake up and never allow a centralized form of currency to infect a society again.
The number of consumer loan accounts enrolled in deferment, forbearance, or some other type of relief plansince March 1 increased to 106 million at the end of May, three times the number at the end of April. Lenders will only allow the pause on payments for so long, with many expecting delinquencies to soar later this year. Once that happens, the repossession of property will occur, and the banks will own almost everything. “We are all gonna be slaves to the Fed,” says JJ.  Which is exactly what they want.
This is a disaster for everyone except the politicians, banksters, and elitists. Once they own everything, you will have very limited choices, which is why now, more than ever, it is important to stand up to anyone who claims power over you and the right to dictate your life.  If you haven’t noticed, the problem is that people don’t ever unite against those who are taking away their freedom, only in defiance of each other.  Once we reject any form of New World Order regardless of the crises they will keep rolling out, we will be free.  But it takes more than a handful of people.
Weekly jobless claims totaled 1.5 million and now total 46 million, which was worse than expected when people obeyed the commands of tyrants. They are doing everything they can to keep this fake economy going for as long as possible so the people will eventually beg for the Great Reset.  Do not fall for it.  Instead, remove yourself from the system.  The current system in place was created by people who don’t care about anyone and it’s past time to take your power and freedom back from these psychopaths. 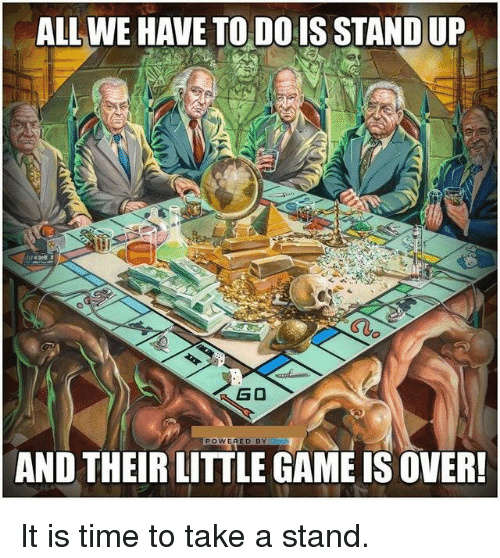 Some will still say asinine things such as “the system is broken! We need a new system!” Yeah? There’s a plan for that called the NWO. And just so you know, the system isn’t broken, it’s meant to work this way. The goal is the elimination of the wealth and property of everyone so the people who currently run the Federal Reserve can give you the system of the New World Order.
Make no mistake, the entire system was set up so they can crash it  at will and manufacture your compliance with the New World Order. This is obvious, and it’s time to wake up.  The government isn’t coming to save you; in fact, they are in on it. You are going to have to open your eyes and save yourself. Prepare (food, water, lead), protect (more lead), and stay alert. It will get uglier, and they will try as hard as possible to get you to comply with the NWO.  Don’t fall for it.
“There is not going to be a pain-free way out of this,” says JJ in the above video. And he’s right.  It’s difficult to leave the system and become self-reliant; however, as of right now, that’s the only solution unless you want to participate and help roll out the NWO and become a slave to the elitists who caused all of this.
Source: SHTFPlan.com