Showing posts from June, 2020
Show all

- June 30, 2020
https://www.rawstory.com/2020/06/more-and-more-white-voters-are-abandoning-trump-and-race-relations-appear-be-the-driving-factor/?utm_source=&utm_medium=email&utm_campaign=4891 If President Donald Trump is reelected in November, he will do it with a lot of help from white voters — especially older white males in rural areas and small towns. But journalist David A. Graham, in a June 30 article for The Atlantic, asserts that Trump’s support among white voters is decreasing — and the top reason, Graham argues, is race. “When video of the police killing of George Floyd first emerged, Trump condemned it,” Graham writes. “But he quickly reverted to his standard rhetoric, seeing a chance to exploit and exacerbate divisions over race. It’s hard to believe that anyone is surprised: while not every offensive Trump comment has reached the same wide audience or been interpreted the same way, the president’s most widely covered remarks have touched on race. What is different this time i
Post a Comment
Read more

History is Once Again Repeating Itself.....

- June 30, 2020
As I was scrolling through my news feed today, I noticed that there is growing similarity in history over what happened in 1929 and what is now happening, almost 100 years later, here in 2020 in the United. States.  The corona virus has truly ruined so many lives and I have pleaded for many to use this golden opportunity to turn to God and FINALLY accept the Peace of God in their lives and to live for one another and to stand against all forms of injustices.  Thankfully some are listening to me while others seek to align me as "insane" but in the end, history will vindicate me and my words.  In that year of 1929, the nation was reeling through The Great Depression and people had lost faith iin the capitalist system.  I am one of the very few who believes that socialism and capitalism can exist together since I am a Progressive Capitalist and I believe that capitalism can work very well for things that people want but not well for things that they need.  That means that things
Post a Comment
Read more

Trump knew about Russian bounties on US military much earlier than he’s letting on: Ex-RNC head

- June 30, 2020
https://www.rawstory.com/2020/06/trump-knew-about-russian-bounties-on-us-military-much-earlier-than-hes-letting-on-ex-rnc-head/?utm_source=&utm_medium=email&utm_campaign=4876 https://youtu.be/QgBwXosayt0 Appearing on MSNBC on Monday morning, former Republican National Committee head Michael Steele claimed he had no doubt that Donald Trump was aware that Russia was paying out bounties for the killings of U.S. soldiers in Afghanistan. Speaking with “Morning Joe” hosts Joe Scarborough and Mika Brzezinski, the former RNC head was asked if Donald Trump thinks Americans are “stupid” for telling them he was out of the loop on the intelligence reports. “I will take up that challenge and say they did brief him,” Steele replied. “I do not believe that something as important and severe as this was left untold to the president of the United States.” “What I think is disturbing is his reaction to it once he was told — the fact that there has been nothing done,” he continued. “Ther
Post a Comment
Read more

- June 30, 2020
https://www.rawstory.com/2020/06/busted-trump-engaged-in-3-week-flurry-of-communication-with-putin-this-year-and-the-white-house-hid-some-of-the-calls/?utm_source=&utm_medium=email&utm_campaign=4883 President Donald Trump engaged in an unprecedented – and previously unknown – “flurry of communication” with Russian President Vladimir Putin during a three-week period earlier this year, according to a sister-network of Voice of America. “On March 30, Russian leader Vladimir Putin and U.S. President Donald Trump spoke by telephone, the first of five calls between the two over a period of three weeks, a flurry of communication unprecedented during Trump’s 3 1/2 years in office,” reports Radio Free Europe/Radio Liberty (RFERL). Only one of those five calls, according to research from NCRM, was shared with the press. None were posted to the White House website, a serious deviation from prior practice. Defend democracy. Click to invest in courageous progressive journalism today
Post a Comment
Read more

Reddit shuts down The_Donald under new policies against hate speech

- June 30, 2020
https://www.digitaltrends.com/news/reddit-shuts-down-the-donald-subreddit/?utm_source=sendgrid&utm_medium=email&utm_campaign=daily-brief Reddit has shut down the subreddit called The_Donald after years of it violating content policies. Reddit cited new rules that aim to push hate speech out of the online community. “All communities on Reddit must abide by our content policy in good faith. We banned r/The_Donald because it has not done so, despite every opportunity,” said Reddit co-founder and CEO Steve Huffman in the announcement of the platform’s updated content policy. Huffman clarified that the shutdown of The_Donald was “absolutely not” about the political views that were discussed in the subreddit, as one of Reddit’s founding principles is to foster political discussion, according to The Washington Post. “There’s a home on Reddit for supporters of Donald Trump. … We’re not the ones who shut down the community. The moderators are the ones who shut down that
Post a Comment
Read more

https://dailyarchives.org/index.php/news/3218-canadian-polish-language-newspaper-publisher-arrested-for-saying-jews-have-terrorism-in-their-blood A Canadian publisher of a Polish-language publication was arrested on June 11 and then subsequently released for publishing anti-Jew articles. The Jewish supremacist B’nai Brith Canada filed a complaint against Andrzej Kumor in August 2019, citing stories in his publication Goniec stating that Jews and Zionists have “terrorism in their blood” and that “Jews are spying on you.” Other articles said that the “Jewish political lobby” controls the United States government. Kumor also made the “terrorism in their blood” remarks in a YouTube video. The articles and YouTube video have since been removed from the internet; the authorities warned Kumor that he would be charged with inciting hatred against Jews if he posted any further anti-Jew content. “We salute the Peel Regional Police for their diligence in pursuing this matter, and ho
Post a Comment
Read more

- June 30, 2020
http://www.renegadetribune.com/california-lawmakers-vote-to-legalize-racial-discrimination-against-whites/ Okay, so try to wrap your head around this. In order to fight against racial discrimination, the lawmakers of California have voted to remove part of the state Constitution that prohibits any kind of racial discrimination. Here is what was originally added to the state Constitution back in 1996: The state shall not discriminate against, or grant preferential treatment to, any individual or group on the basis of race, sex, color, ethnicity, or national origin.” The  The Wall Street Journal  covers the story, but does not point out the obvious reason why the prohibition on race-based discrimination was repealed. We live in strange times, and strange indeed is that, while deploring racism, the Democratic Legislature in California has voted to codify racial discrimination in state law. On Wednesday the state Senate voted for a constitutional amendment, ACA 5, tha
Post a Comment
Read more 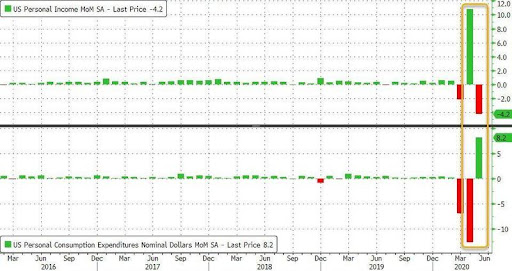 http://www.renegadetribune.com/a-quarter-of-all-personal-income-in-the-us-now-comes-from-the-government/ By  Tyler Durden Following today’s release of the  latest Personal Income and Spending data , Wall Street was predictably focused on the changes in these two key series, which showed a record jump in personal spending (to be expected one month after the savings rate in the US hit a whopping 32% annualized), and a record drop in personal income (as government benefits and stimulus checks slowed substantially). But while the change in the headline data was indeed notable, what was far more remarkable was less followed data showing just how reliant on the US government the population has become. We are referring, of course, to Personal Current Transfer payments which are essentially government sourced income such as unemployment and emergency benefits, welfare checks, and so on. In May, this number was $5.3 trillion annualized, following the record $6.4 trillion hit la
Post a Comment
Read more

The Jewish Cultural Looting and Plundering of Germany After its Defeat

- June 30, 2020
http://www.renegadetribune.com/the-jewish-cultural-looting-and-plundering-of-germany-after-its-defeat/ German military leaders charged with war crimes at Nürnberg were charged with “destruction et pillage d’oeuvres d’art” based specifically on the violation of Article 56 of the Hague Convention of 1907 regarding war booty. Ironically, the Hague convention got its inspiration from disputes which arose from the Napoleonic Wars regarding Napoleon’s notorious plundering. Article 56 was seen as expressing the prohibition of any unilateral seizure of cultural property and putting an explicit limit to the prior practice of unlimited looting. Sadly, the biggest theft of all, the most massive art heist of all times, the looting and plundering of German treasures has drawn scant, if any, media attention. While there was no general authorization of the Allied Control Council to carry off German cultural property as a means of reparation or compensation, the Soviets openly ignored internati
Post a Comment
Read more
More posts