By William Thomas and Kate Pavitt
From The Book of Talismans, Amulets and Zodiacal Gems [1922]

The Swastika, one of the oldest and certainly the most universal Talisman known, can be traced back to the Neolithic Age, and it has been found engraved on stone implements of this period. It is to be met with in all parts of the Old and New Worlds and on the most ancient ruins and remains, it thus living through the Ages in active use down to the present time. In spite of its antiquity and the fact that some writers quote it as being in use among the Egyptians, we have not been able to find it, as a symbol used by them, amongst their remains in the British Museum, and authorities whom we have consulted are also unaware of its existence in Egyptian records.
It was used long before its present name was given it, and extensive discussion has been carried on as to whether its correct form is with its arms turned to the left, or to the right, without, as far as we have been able to ascertain, any definite conclusion being arrived at. Both forms seem equally popular, and are so found in all countries; whilst on the rock walls of the Buddhist caves of India they are used in great numbers, with their arms turned both ways often in the course of the same inscription.
In Sanskrit its name means Happiness, Pleasure, Good Luck, Su—good, or well; Asti—being, making it = “Good Being”; and it is still used in India, China, and Japan as an Amulet for long life, good fortune, and good luck. 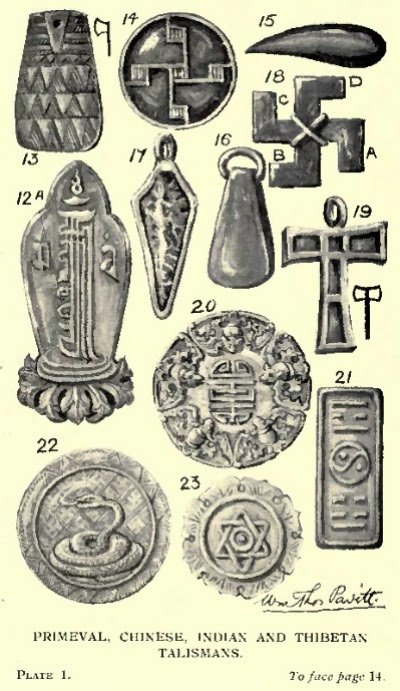 The illustration shown on Plate I, No. 14 is from a shield of the Bronze Age, the background being of dull red enamel, and the arms turned to the left; whilst No. 18, which turns to the right, is taken from between the feet of a statue of Buddha from Ceylon, and is also commonly found in the footprints of this Deity, sometimes both forms being used in the same impression. In China the Swastika sign is pronounced Wan, meaning a great number, a multitude, great happiness, longevity; both forms are used, but most commonly that which is turned to the left. The Jains of India regard it as a symbol of human progress, the right arm A (Illustration No. 18) representing the lowest stage of life, as protoplasm; the lower arm B indicating the soul’s evolution, and through plant and animal life C representing human evolution, and D the spiritual life, the plane on which the soul is entirely freed from matter by the practice of the three jewels, right belief, right knowledge, and right conduct. In their temples at their service of baptism or its equivalent rite, this symbol is traced on the forehead of the candidate as a benediction for protection from evil influences. It is used as an emblem of the highest of all, the Almighty maker of the heavens and earth, indicating the Divine Force radiating through the Universe; it is also regarded as a sign of Benediction and good augury amongst Buddhists and all Eastern nations, and as a symbol of the Sun, when represented turned to the left, the Autumnal period, and when turned to the right the Vernal.
It has been identified as the Hammer of Thor, the Lord of Thunder and Lightning, the God of the Air; and amongst the Scandinavians was believed to have dominion over the Demons of the Air, and the coat-of-arms of the Isle of Man—a Swastika formed of three human legs, is a legacy from the early settlers of their race. It may occasionally be met with, having five or six limbs, and is then probably intended to represent the Wheel of the law, or Buddha’s Wheel; whilst a three-limbed figure is much used in the Punjaub and other parts of India by the Mohajin Log (the banking, or moneyed class) as a charm which was not only worn, but used as an ornament in their houses, generally over the door.
It is also the symbol indicated by the silent ascetic sitting with arms folded over the breast, the legs crossed, and each foot placed on the opposite thigh, which accounts for this pose, so familiar amongst the images of the Indian gods.
Dr. Eitel says this symbol was frequently cast on bells during the Middle Ages, and he instances as being still in existence those of Appleby, Scotheim, Waldingham, Bishop’s Norton, and Barkwith in Lincolnshire, Hathersage in Derbyshire, Maxborough in Yorkshire and many others.
The fact that this symbol is found universally throughout India, Africa, North and South America, Asia and Europe forms a very strong argument for a common origin lost in the far distant past, and is considered by some writers as evidence of a connection between these continents and the lost continent of Atlantis.