The Israeli cabinet is set to meet Sunday to discuss further easing coronavirus restrictions, including opening malls and markets, amid figures suggesting the country has largely managed to curb the spread of the coronavirus.
Eighty percent of Israeli towns and villages have reported no new COVID-19 cases for several days, with Tel Aviv among them, a TV report said Friday, and only four cities nationwide have had more than five new cases in the past few days: Jerusalem, Hura, Bnei Brak and Beit Shemesh. (Jerusalem and Hura have been under a partial lockdown, as have two neighborhoods in Beit Shemesh.)
Several hospitals have not had a single new coronavirus patient in recent days, the Channel 12 TV report also said, and were repurposing virus wards back into general treatment centers, though they were ready to return them to COVID-19 centers if the need arose. Jerusalem’s Shaare Zedek Medical Center has closed four out of its six coronavirus wards.
As of Friday evening, the number of confirmed coronavirus cases in Israel stood at 16,101, an increase of 155 over the last 24 hours, the Health Ministry said. Of that total, 9,156 Israelis have recovered from the virus.“The spread of the COVID-19 virus in Israel has been halted,” said Channel 12’s  medical correspondent.
The death toll was 225, with three deaths in the past 24 hours.
According to the ministry, 103 people infected with COVID-19 were in serious condition, 83 of whom are on ventilators. The number of patients on ventilators has steadily declined in recent weeks, from a high of 137 on April 16.
Amid the encouraging trends, ministers on Sunday are to consider opening public parks, malls and open-air markets and ending the restriction keeping the public within 100 meters from their homes if not for a permitted activity. The government is also set to allow swimming in the sea and open public swimming pools, TV reports said.
Channel 12 reported that both the Health Ministry and the Finance Ministry would present their plans for further opening up the economy, with the latter expected to push for almost all businesses to be allowed to open as long as they complied with safety guidelines.
The Finance Ministry is desperate to restart the economy which is at a near standstill. Jobless figures spiked to 1,093,000 by mid-April, bringing the unemployment rate to an unprecedented 26%, from below 4% pre-coronavirus.
Much would depend on the information coming in over the next few days that would help the government asses the impact of the first wave of easing following the Passover lockdown, but initial signs are positive, the reports said. 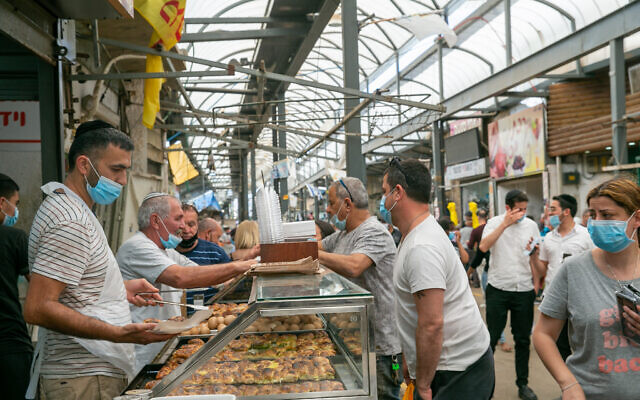 Israelis shop at a market in Ramle on May 1, 2020. (Yossi Aloni/Flash90)
Critics have charged that the current restrictions are inconsistent and on Friday police expressed concern that thousands of Israelis were flouting social distancing rules and flocking to beaches and markets.
Police warned they would still fine violators. 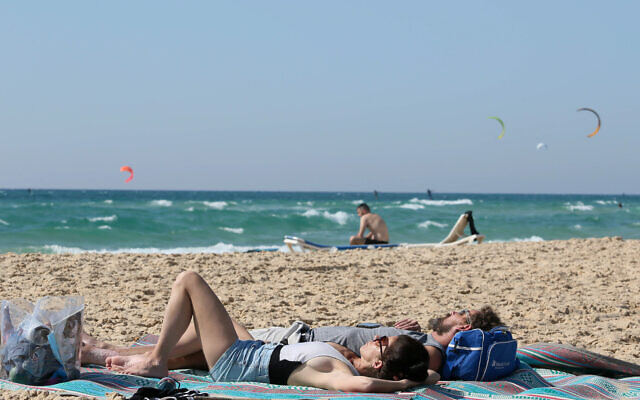 Israelis at the beach in Rishon Lezion on May 1, 2020. (Yossi Aloni/Flash90)
Hundreds of people took advantage of the warm weather to spend time outside, heading to beaches in Tel Aviv and Herzliya, many of them not keeping to distancing rules and not wearing masks. Others thronged to markets to shop ahead of the Sabbath or were just hanging out in outdoor spaces, like Tel Aviv’s iconic Dizengoff Square.
Restrictions on physical exercise outdoors were partly lifted Thursday morning, with sports enthusiasts no longer limited to a distance of 500 meters from home.
Group sports are still prohibited.
Also Friday, the cabinet authorized the gradual opening of schools, with first through third graders and 11th and 12th graders allowed to return to school on Sunday. However, most schools were unlikely to open with many municipal authorities saying they were not ready.
Many cities said they would not be ready to safely reopen Sunday, with the decision only coming Friday morning after days of deliberations. They also accused the government of failing to lay out clear guidelines for the process. 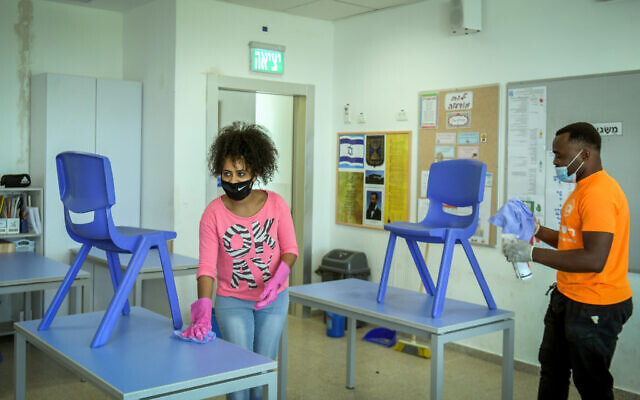 Workers clean a classroom at Luba Eliav primary school in Rishon Lezion on April 30, 2020. (Flash90)
Apparently in response to the protests, the Education Ministry said that the opening of schools would be staggered, allowing cities time to get ready and the process should be completed by Tuesday.
The government announced that in ultra-Orthodox schools, students in grades 7-12 will head back to the classroom on Sunday instead of the younger grades, as well as “minor seminaries,” without defining the parameters.
The remainder of students are expected to go back to school by June 1, and are to continue with remote learning in the meantime.
Special education classes will be fully resumed and provisions will additionally be decided in the future for children deemed to be at-risk, the Prime Minister’s Office said, adding that school will not be compulsory, with the exception of matriculation exams.
The National Security Council had recommended that the reopening of schools be delayed, saying that educational institutions had not made the preparations necessary to be able to reopen during the pandemic.
The decision to delay the opening of kindergartens came after Health Ministry officials pushed to postpone the move, amid fears that young children will be unable to maintain necessary social distancing or hygiene standards, and that keeping groups of 15 kids separate from each other, as ordered, will be difficult.
An Israeli Health Ministry epidemiological study released Thursday found that children can carry and transmit the disease, but at a lower rate than adults. The authors emphasized that the findings were preliminary.