2019 saw the most anti-Semitic incidents in at least 40 years, ADL says

(JTA) — Last year saw the most anti-Semitic incidents in the United States since at least 1979, according to the Anti-Defamation League.
The 2,107 incidents recorded in 2019 reflect a 12% increase from 2018 and are more than double the 942 incidents recorded just four years earlier, in 2015. It’s the highest number recorded by the ADL since it began tallying incidents in 1979.

Aside from a small dip in total incidents in 2018, the ADL’s annual statistics show that anti-Semitism in the United States has been on a steady climb for much of the past decade.
Last year saw a number of high-profile anti-Semitic incidents. In April, a gunman killed one person and wounded three in a synagogue shooting in Poway, California. In December, two shooters killed four people, including two Jews, in an attack that ended at a Jersey City kosher supermarket. Eighteen days later, an attacker killed one person and wounded four in a stabbing at a Hanukkah party in Monsey, New York.
The year also saw a stream of anti-Semitic incidents in Brooklyn, mostly targeting Orthodox Jews. Earlier in the year, and in a different arena, Minnesota Rep. Ilhan Omar made comments widely condemned as anti-Semitic.

“This was a year of unprecedented anti-Semitic activity, a time when many Jewish communities across the country had direct encounters with hate,” Jonathan Greenblatt, the ADL’s CEO, said in a statement accompanying the report. “This contributed to a rising climate of anxiety and fear in our communities.”
A recently released study by the ADL found that the majority of American Jews have witnessed or experienced anti-Semitism in the past five years. Nearly two-thirds said they’re less safe than they were a decade ago. 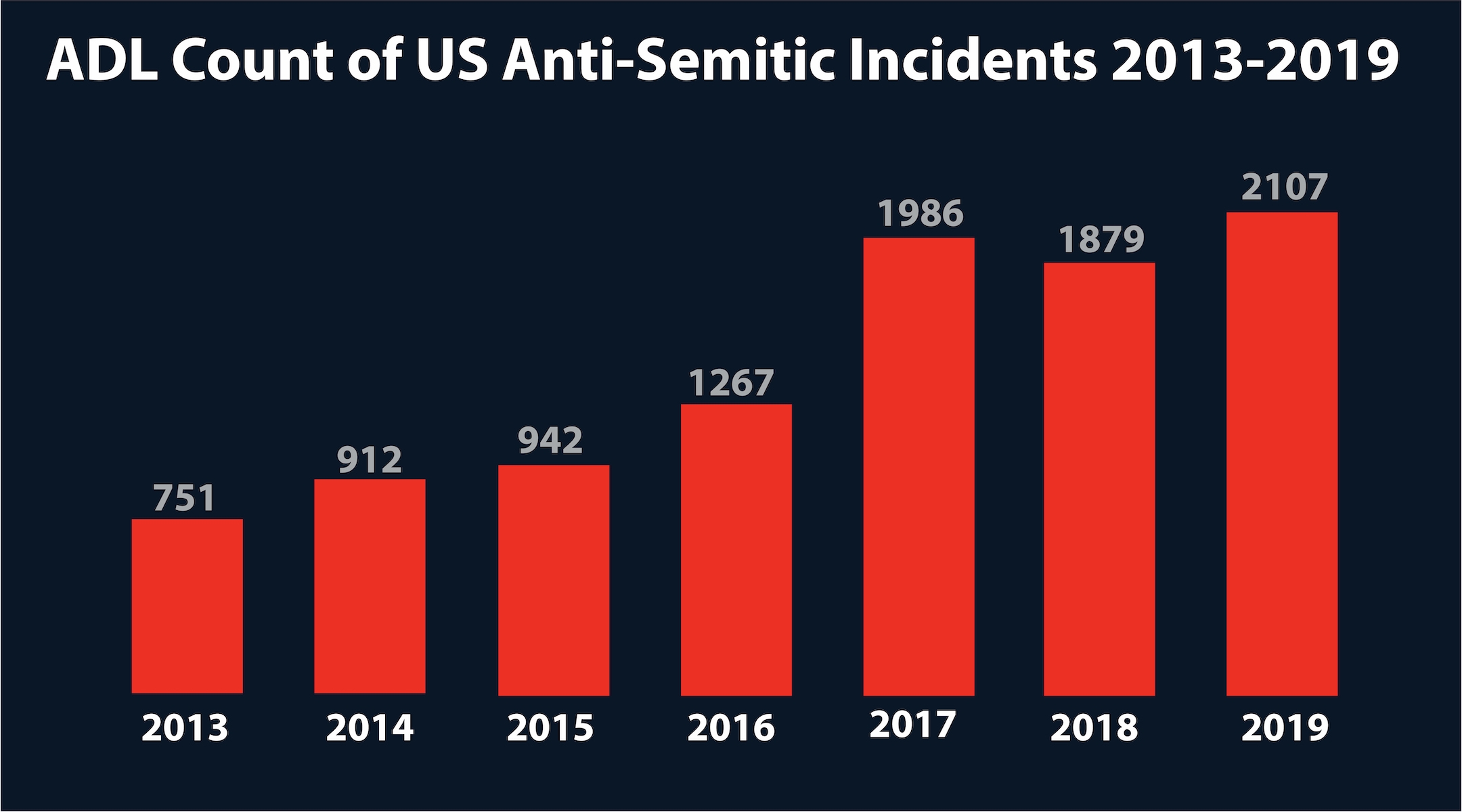 The ADL’s annual report on anti-Semitic incidents is compiled using data reported to the organization and then evaluated by its Center on Extremism. The data come from people affected, community leaders and law enforcement.

2019 is the latest in a string of years when American Jews suffered an attack that has gained national attention, sparked protest from Jews worldwide and seared itself to Jewish communal memory. The previous year included the Pittsburgh synagogue shooting, in which 11 Jews at prayer were killed. In 2017, at a far-right rally in Charlottesville, Virginia, one person was killed and neo-Nazis chanted anti-Semitic slogans.
In 2019, New York City was hit especially hard: More than half of the year’s 61 anti-Semitic physical assaults took place in the five boroughs. Brooklyn felt the brunt with 25, more than a third of the total.
New York state experienced a total of 430 anti-Semitic incidents, the most of any state and a fifth of the total. The state is home to more than one-fifth of American Jews.

New Jersey was second with 345 incidents, followed by California with 330. Every state in the continental United States and Washington, D.C., saw at least one incident.
More of the 2019 incidents were reported in public areas, like parks or streets, than in ’18, and fewer were reported on campus and in Jewish institutions like schools or synagogues. Eleven percent of the incidents, a total of 234, took place at Jewish institutions, and nearly 9%, or 186 incidents, on campus.
Thirteen percent of the incidents, a total of 270, were committed by members of extremist groups or those inspired by an extremist ideology like neo-Nazism or black nationalism, the ADL found. Most of those were pieces of propaganda like flyers or banners.
Eight percent of incidents, a total of 171, involved references to Israel and Zionism. Of those that referenced Israel, 68 came from white supremacist groups. Most of the rest took place on campus.