This new power for the driving of the world’s machinery will be derived from the energy which operates the universe, the cosmic energy, whose central source for the earth is the sun, and which is everywhere present in unlimited quantities.” -Tesla
Because of the fault of Capitalism, which considers only private interests, the exploitation of electricity generated by water-power is in Germany only in its infancy… The future belongs, surely, to water, to the wind and the tides.” -Hitler
His plans for post-war times were enormous in scale & scope; ranging from the eradication of cancer to the giant power plants he wanted to build in the Sahara, together with the African nations, in order to harness solar energy. (Hitler said) ‘It’s not necessary to be allied or bound to everyone; it’s much easier to help everyone without international ties’; that was his opinion. Immensely interesting plans were already on the drawing board. All of us wanted peace as soon as possible.” -Prince Friedrich Christian of Schaumburg-Lippe (Germany) 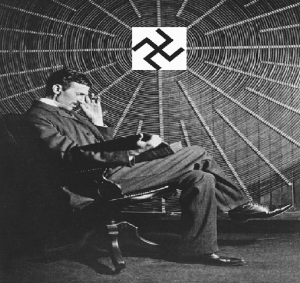 Tesla was a multi-disciplinary genius.  A trailblazer for White Achievement!  A pioneer for Free-Energy technology!  His discovery of the rotating magnetic field in 1882 led to a series of US Patents in 1888, which gave us the AC electric power system still in use today. This one achievement earned him the honor of being called “The Man Who Invented the 20th Century”.
His research went way beyond what has found its way into everyday use.  He is the recognized inventor of the brushless AC induction motor, radio, remote control by radio, super-conductivity, fluorescent lighting, the bladeless turbine engine and pump, the capacitor discharge ignition system for automobile engines, the mechanical oscillator, and dozens of other inventions.  He also discovered that useful energy could be extracted from the heat of the ambient air, and that electric power in the form of Radiant Energy could be broadcast to everyone in the world through the ground.
In his masterful article, “The Problem of Increasing Human Energy”, Tesla discusses the “energy situation” like never before.  After discussing every known method of gathering energy from the Natural World, Tesla departs into the unknown.  His first discussion is about a machine that can gather heat from the ambient air.  He calls it a “Self-acting Engine” since it could run indefinitely from the solar energy stored in the air. He called it “the ideal way of obtaining motive power”.
Tesla worked for years trying to solve all of the technical issues presented by the idea.  His work with liquefied air, his discovery of hyper-conductivity at ultra-low temperatures, his bladeless turbine and mechanical oscillator were all spin-offs from his work on the ambient air heat engine.  He was convinced that the system could work and that it was absolutely the best way to harness solar energy.
Nikola Tesla’s most famous attempt to provide everyone in the world with Free-Energy was his World Power System, a method of broadcasting electrical energy without wires, through the ground.  His Wardenclyffe Tower was never finished, his work was shut down by International Jewry, but his dream of providing Free-Energy to all points on the globe is still alive today.
Note: This info on Tesla goes into more detail (with links) here: http://free-energy.ws/nikola-tesla/
A few other noteworthy pioneers of Free-Energy include John Keely & Royal Rife.  John Keely (1827-1898) was prevented from giving the planet the principle for power production based on the musical vibrations of tuning forks; demonstrating that that music could resonate with atoms or with the ether.  Royal Rife (1888–1971) was prevented from giving the planet a cure for Cancer using a microscope he designed that first identifies then destroys the micro-organisms which causes Cancer.
There exists withheld technology that will desalinate the ocean, producing fresh drinking water.  Technology is being withheld to turn deserts green.  Technology is being withheld in all fields to prevent human progress.  Yet, the truth is coming out and National Socialism is the answer to bring these hidden natural technologies forward.
The past is a great mystery, like the Great Mystery behind all creation.  There is no doubt that the Ancient Aryans contributed to the fountain of past knowledge that has assisted many races, tribes and people.
http://www.renegadetribune.com/aryan-genesis-part-1-ancient-aryans/
The legend of a technologically & spiritually-advanced Atlantis, and other similar lost civilizations like Hyperborea, may be a very real possibility.  It is also probable that the Aryan race was receptive to receiving cultural gifts & wisdom teachings back from others who we have made contact with in the very distant past.
One thing for sure; all over the planet, indigenous tribes are carrying ancestral gems of advanced understandings that deal with the quantum universe and the protocols that relate to cosmic relationships between all living things.  This “understanding” is sacred & universally understood by many native peoples who have kept their traditional spiritual practices in use, despite pressure from outside forces to integrate into the “civilized” Western World.
There is strength in unity (not Diversity) and living in accords with Natural Law.  What is destructive and not natural is International Jewry’s attempts to force integrate races and people of different evolutionary & genetic backgrounds.  That is White Genocide!
An important maxim is that “Nothing in this universe is static and everything in life is in constant motion.”  This activity, on the quantum level, generated at the “Zero Point”, has the power to supply our communities with a source of Free-Energy that is clean for the environment, safe and unlimited.  All in accords with Natural Law!
The innovative works of modern-day pioneer inventors, like Nikola Tesla, have paved the path for Free-Energy technologies to come forward after being suppressed & hidden for many thousands of years.
Books, like Lynne McTaggart’s “The Field”, documentary movies, such as “Thrive”, and YouTube videos by authors like David Wilcock are publicly disclosing to mainstream audiences the mechanics of how Free-Energy works.  Again… be forewarned that these media outlets are interlinked with the Jewish-controlled field of New Age “Consciousness” & “Conspiracy Theories”.
Regardless, a new scientific paradigm is underway that will completely transform our planet, however, it will take National Socialism, in alignment with the Laws of Nature, to bring Free-Energy technologies into the public sphere.
The following links are a treasure trove of information pertaining to Free-Energy, the Abundant Universe, White Achievement and living in harmony with the Laws of Nature.  It is our duty to archive, preserve, protect, save, back-up and distribute articles like these, and many others from Renegade Tribune, while the opportunity exists.
http://www.renegadetribune.com/service-nature-viktor-schauberger-water-magician/
http://www.renegadetribune.com/inventor-water-powered-car-died-restaurant-yelling-poisoned/
http://www.renegadetribune.com/how-to-absorb-earths-free-flowing-electrons-through-the-soles-of-your-feet/
http://www.renegadetribune.com/technology-of-the-solar-age-the-transformation-of-energy/
http://www.renegadetribune.com/transmutation-technology-breakthrough-russia/
http://www.renegadetribune.com/singapore-hospital-designed-to-accommodate-nature-is-the-future/
http://www.renegadetribune.com/acoustic-levitation-ancient-high-technology/
http://www.renegadetribune.com/brien-foerster-magnificent-megaliths-of-ancient-civilizations/
http://www.renegadetribune.com/the-faustian-spirit/
http://www.renegadetribune.com/industrial-revolution-white-super-achievement/
http://www.renegadetribune.com/native-prophecies-ancient-aryans/
Be sure to check out The Noble Protagonist’s 1,100 page E-book, “The Battle to preserve Western Civilization (European Folk Soul vs. Jewish Supremacy).  Free E-Book available at: https://archive.org/details/@nobleprotagonist
Battle for the West (Website): http://www.battleforthewest.com/
Battle for the West (BitChute): https://www.bitchute.com/channel/65cDI4QdHali/
- April 12, 2020
Email ThisBlogThis!Share to TwitterShare to FacebookShare to Pinterest