If we “goyim” say that jews run the world, we are in big trouble for perpetuating an “anti-semitic canard.” The jews who run the world have ensured that anyone who points out their power, if they are not enthusiastically celebrating it, is harassed, shunned, fired, and sometimes even tortured and murdered. When jews got complete control in the Soviet Union they made “anti-semitism” a crime punishable by death.
However, when jews state the obvious about jewish control, it’s completely kosher. Here is Gilbert Gottfried celebrating that Hitler is dead 75 years after the fact and celebrating his tribe’s worldwide dominance.
In case he deletes the tweet, here is a screenshot. 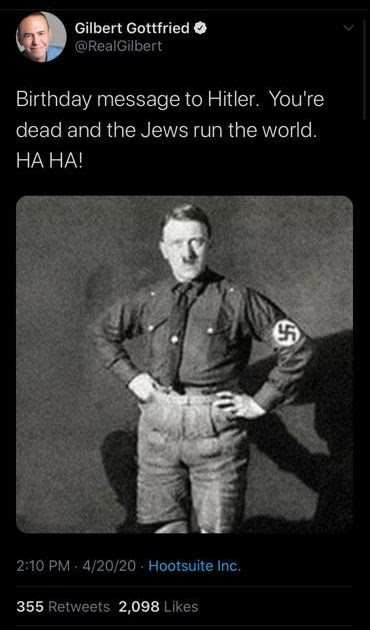 Gilbert has “joked” about jewish power in the past too. In 2017 he did an interview with the Times of Israel:

I hate to travel. I travel for work constantly so a vacation is sitting in the apartment by myself on the couch watching television. That’s the biggest vacation in the world. And I’ve never been to Israel because [starts laughing] I feel the Jews have way too much power in our country, and I fear [cracking up] the Jewish conspiracy. […]
I remember — and this was a proud moment for me — it hit the papers that some Nazi white supremacist group was warning everyone about the frightening amount of power that the Jews wield, and they were naming powerful Jews. And my name was on the list! I’m there with Steven Spielberg and I thought “Wow!” I almost wanted to send them a thank you letter! When do I get mentioned with Spielberg and Michael Eisner and Billy Wilder?

Gilbert Gottfried is possibly one of the most obnoxious jewish “comedians” there is, and that says a lot. Just listen to the disgusting, degenerate “joke” he tells here.
jews like Gilbert Gottfried also love to “joke” about child rape.
Gilbert says he was not really raised as a religious jew, but he certainly acts like a Weimar jew before the NSDAP came to power.
He told the JTA:

The only time I’d be in a synagogue would be at someone else’s bar mitzvah or a funeral,” he said. “I didn’t reject Judaism, I was raised [in an unreligious] way. [But] I know that if we’re ever rounded up again, I’ll be on the train.”

You will definitely be on the train, Gilbert. No joke. 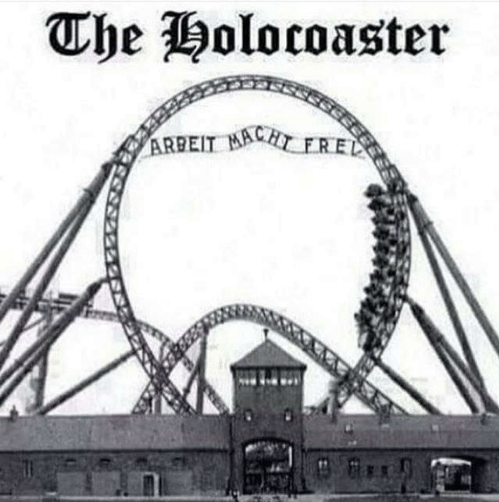 You know, jews actually can be kind of funny. I am sure you have heard some of the knee-slappers​ they tell about the Shoah.