Evidently the virus started by Morgenthau and Baruch of a Semitic revenge against all Germans is still working.” ~ General George S. Patton, 1945

The virus unleashed by jews is indeed still working, even 75 years after Patton made the above diary entry.
While governments around the world clamp down on their citizens under the guise of protecting them against the “novel” coronavirus, the occupied German government has decided to raid the homes of 21 leading Germans in the Reichsbuerger movement.
The Reichsbuerger, or Reich citizens, are somewhat like the “sovereign citizens” in the US. They do not recognize the authority of the occupied German government and claim “natural rights” for themselves. They are called far-right, conspiracy theorists, racists, and anti-semites, though I honestly do not know what their core beliefs are. Regardless, this group is obviously not kosher, so Germany’s ZOG has decided to ban the group and “SWAT” the members. 400 police officers stole a few firearms, “propaganda” material and small amounts of drugs (probably cannabis).
Horst Seehofer, Germany’s top security official, made a statement about the ban and the raids.

We are dealing with a group that distributes racist and anti-Semitic writings and in doing so systematically poisons our free society.”

Let’s examine the hypocrisy here. Is a free society one in which people are allowed to publish and distribute material freely or one in which people have a totalitarian state barge into their homes and steal their belongings simply because the government disagrees?
Ironically, the actions of the occupied German government actually sound very similar to the way they portray those evil “Nazis” they rail against constantly. 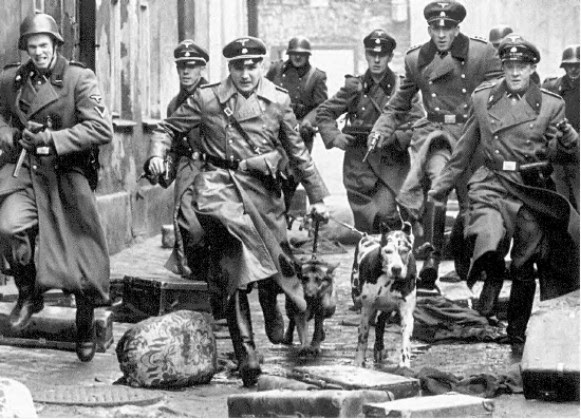 It’s kind of like how Israel puts Palestinian semites in open air concentration camps and then bombs innocent men, women, and children with outlawed White phosphorous, while simultaneously kvetching about how the Germans put them into camps.
In actual reality, the Zionist Occupied Governments of the world are acting in a much more brutal and unjustified manner than the Nationalist Socialists ever did. They’re the real tyrants.