An 88-year-old man died in Jerusalem’s Shaare Zedek hospital on Friday night from the coronavirus, Israel’s first fatality in the global pandemic, while several other patients were in a critical condition.
The hospital said the patient had been admitted in a very serious condition with multiple preexisting conditions. Despite intensive treatment, including being resuscitated from heart failure, he had deteriorated rapidly in recent hours and died, the hospital said.
According to Hebrew media reports, he, along with an 89-year-old Jerusalem woman fighting for her life in Hadassah Hospital Ein Kerem, were among several residents of the Nofim senior home in Jerusalem who have come down with the disease.
The three patients were a 67-year-old woman with a preexisting medical condition, a 91-year-old woman, and 45-year-old man with no past health problems, according to the Kan public broadcaster.The condition of three other Israelis being treated at Wolfson Medical Center in Holon for COVID-19 deteriorated Friday, with all of them in serious to critical condition.
Shortly before midnight Friday, an 82-year-old man was transferred to Hasharon Medical Center in Petah Tikva in critical condition. 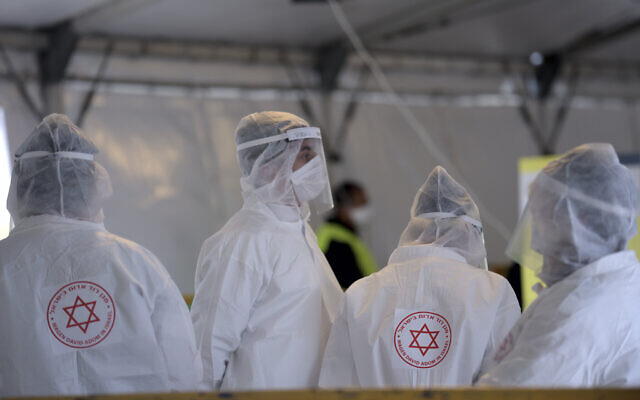 Magen David Adom medical team members, wearing protective gear, are seen at a drive-through site for Coronavirus testing samples collection, in Tel Aviv, on March 20, 2020. (Gili Yaari/Flash90)
Another 10 people infected with the virus are receiving treatment at the hospital, three of them in moderate condition.
Also Friday, the condition of a 57-year-old man with COVID-19 at Hadassah Hospital Ein Kerem in Jerusalem worsened. He was now listed in serious condition.
Meanwhile, the Rambam Medical Center in Haifa said the condition of a 70-year-old man with a background illness had deteriorated and that he was in serious condition, sedated and on a respirator.
According to the Health Ministry’s latest figures, released midday Friday, there have been 705 confirmed cases of the coronavirus in Israel, with 9 people in serious condition.
The ministry also said 18 people were in moderate condition and that the rest had mild symptoms.
A total of 15 people have recovered from COVID-19 and been released to their homes. 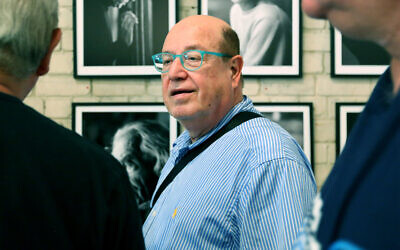 Israeli comedian Tuvia Tzafir, May 20, 2016. (Moshe Shai/Flash90)
Israeli actor and comedian Tuva Tzafir tested positive for the virus on Friday. The veteran TV personality was at an event recently with an another infected person, Channel 12 reported.
“His condition is good. He is isolated at home under doctor supervision. He feels fine,” a spokesperson told the Ynet news site.
Israel has taken far-reaching measures to contain the virus and on Friday the cabinet authorized further stringent workplace restrictions, tightening the limit to just 30% of workers in both public and private sectors in a bid to slow the spread of the coronavirus.
The Finance Ministry, which announced the decision, said that industries deemed vital to the economy and public well-being would be exempt and noted that all businesses can keep operating as long as they manage to abide by the rules.
The new workplace restrictions come hours after new emergency regulations legalizing tough personal restrictions on movement came into effect Friday, after receiving cabinet approval overnight. 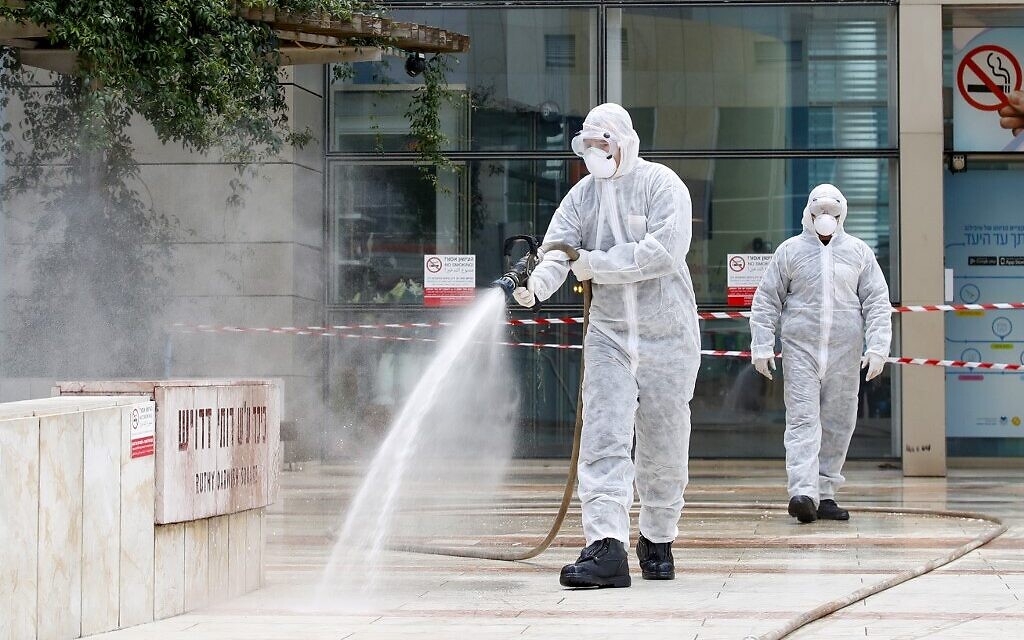 An Israeli firefighter sprays disinfectant at the entrance of Ichilov Hospital in Tel Aviv on March 20, 2020. (Jack Guez/AFP)
Ministers unanimously approved the measures, which made the limitations on movement announced earlier in the week legally binding and enforceable.
The restrictions dictate that Israelis should stay at home at all times unless for purposes of essential work, stocking up on food, medical issues or a limited number of permitted activities.
Worldwide, there have been at least 256,296 reported coronavirus cases and 11,015 deaths, according to an AFP tally.
Israeli officials had warned recently that the country would likely see its first deaths soon and that cases of illness will climb into the thousands.
The disease generally only shows mild symptoms in the young and healthy, but can cause serious respiratory issues and death in older adults and those with underlying conditions.