JTA — Russian President Vladimir Putin’s prime speaking slot at a Holocaust commemoration event in Jerusalem this week was generating controversy even before the longtime leader took the podium. His remarks Thursday at the event commemorating the 75th anniversary of the liberation of Auschwitz by the Red Army has done little to quell it.
Speaking at the Yad Vashem Holocaust museum, Putin claimed that 40 percent of the Jews who died in the Holocaust were citizens of the Soviet Union. Historians called the claim absurd.
“It’s completely false,” Jan Grabowski, a historian at the University of Ottawa, told the Jewish Telegraphic Agency in an interview. 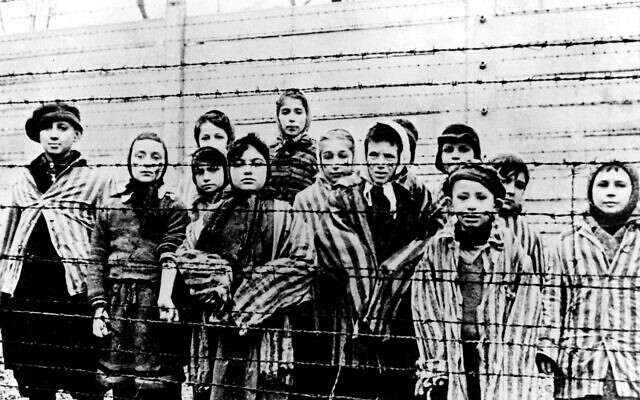 Jelena Subotic, a professor of political science at Georgia State University and the author of “Yellow Star, Red Star: Holocaust Remembrance After Communism,” called Putin’s claim “ridiculous and not based on historical fact,” noting the that the “consensus” among historians is that about 1 million of the 6 million Jews murdered were from the Soviet Union.
A picture taken just after the liberation by the Soviet army in January, 1945, shows a group of children wearing concentration camp uniforms behind barbed wire fencing in the Auschwitz Nazi death camp. (AP Photo/CAF pap)
In recent months, Putin has engaged in a war over Holocaust complicity with Poland, whose president, Andrzej Duda, declined to attend the Jerusalem event  because he was denied a speaking slot. Putin has accused Poland of cooperating with Germany in 1938, while Duda has charged Russia with downplaying its own role in invading the Eastern European nation in cooperation with the Nazis the following year.
“I think this [40 percent] number could — and maybe should — be seen as part of the ongoing memory war between Poland and Russia,” said Havi Dreifuss, a historian at Tel Aviv University.
More than 40 foreign leaders attended Thursday’s event, which was organized by President Reuven Rivlin, Yad Vashem and the Foreign Ministry in conjunction with European Jewish Congress head Moshe Kantor.
Putin’s invitation to speak, and Duda’s lack of one, was seen by some as a sign that Israel was allowing itself to be dragged into the ongoing conflict in Eastern and Central Europe over the legacy of the war. (An Israeli official said Wednesday that Duda was offered “some kind of platform to speak” if he attended.) 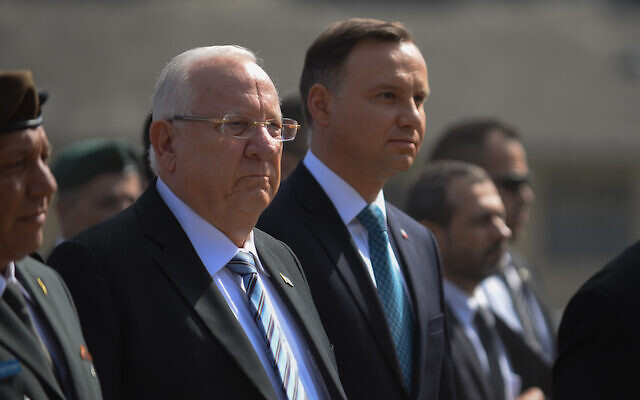 President Reuven Rivlin, left, with his Polish counterpart Andrzej Duda at the Auschwitz-Birkenau death camp in Oswiecim, Poland, April 12, 2018. (Omar Marques/SOPA Images/LightRocket via Getty Images/via JTA)
“This is realpolitik, it has unfortunately nothing to do with morality,” Grabowski said. “The memory of the Holocaust has been used and abused by the Israeli government just as it is by the Polish or Hungarian governments.”
Experts say the increasingly vitriolic, and often ahistorical, claims about the past are driven by the politics of the moment. Russia, facing crippling Western sanctions for its aggression against Ukraine and other international misdeeds, is said to be milking the moral capital it has as the liberator of Auschwitz to portray itself as being on the right side of history.
Its neighbors, meanwhile, fearing a resurgent Russia and coping with their own newly assertive nationalist movements, are refusing to let Russia burnish its own history unchallenged. Many former communist countries, searching for unifying national identities after decades of communist rule, have also looked to the Holocaust period for legitimizing narratives, in the process often whitewashing their own histories and raising up nationalist figures who often collaborated with the Nazis as they resisted Soviet rule.
Putin’s remarks stood in stark contrast to Germany, whose president, Frank-Walter Steinmeier, not only acknowledged the country’s responsibility for Holocaust atrocities in his Yad Vashem speech but detailed the ways Germany is failing to heed the lessons of the past. 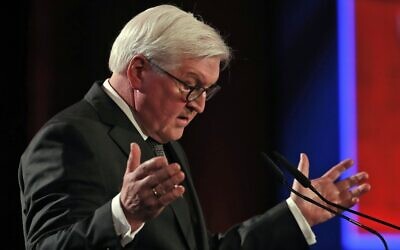 German President Frank-Walter Steinmeier delivers a speech during the Fifth World Holocaust Forum at the Yad Vashem Holocaust memorial museum in Jerusalem on January 23, 2020 (RONEN ZVULUN / POOL / AFP)
“I stand before you, grateful for this miracle of reconciliation, and I wish I could say that our remembrance has made us immune to evil,” Steinmeier said. “Yes, we Germans remember. But sometimes it seems as though we understand the past better than the present. The spirits of evil are emerging in a new guise, presenting their anti-Semitic, racist, authoritarian thinking as an answer for the future, a new solution to the problems of our age.
“I wish I could say that we Germans have learned from history once and for all. But I cannot say that when hatred is spreading.”
Addressing the gathered world leaders, Prime Minister Benjamin Netanyahu expressed gratitude for the Allied war to defeat Nazi Germany, even as he claimed the world had “largely” abandoned the Jews during the Holocaust. Noting that the lesson of Auschwitz was “always to take seriously the threats of those who seek our destruction,” Netanyahu pointed to a current political concern he believes the world is failing to address.
“I am concerned that we have yet to see a unified and resolute stance against the most anti-Semitic regime on the planet – a regime that openly seeks to develop nuclear weapons and annihilate the one and only Jewish state,” Netanyahu said, referencing Iran.
Netanyahu has railed for years against the efforts by the United States and other leading global powers to strike a deal with Iran over its nuclear weapons program. In 2018, US President Donald Trump pulled the country out of the nuclear agreement signed three years earlier.
“Israel salutes President Trump and Vice President Pence for confronting the tyrants of Tehran that subjugate their own people, and threaten the peace and security of the entire world,” Netanyahu said. “They threaten the peace and security of everyone in the Middle East and everyone beyond. I call on all governments to join the vital effort of confronting Iran.”