A story out of The Age website that broke 13 January 2020 states “Couple flies Nazi flag over Victorian home.”A couple, stating to be German, have been flying a National Socialist German flag on their private property for several weeks. Their residence is located in the Mallee town of Beulah, part of north-west Victoria. It is reported that several complaints have been filed by neighbors and the flying of the flag has sparked a furor among politicians and the Anti-Defamation Commission. If you do a web search you will see that the story has been picked up by several online news sources.

When contacted by The Age, home owner Cheryl Lawdorn, who bought the house with her partner last year, defended her right to fly the flag over her own home because of her German ancestry.

This incident seems just a little too convenient to me and has set off my Jewdar.

The chairman of the Anti-Defamation Commission, Dr Dvir Abramovich, who has been campaigning nationally to ban the sale and public displays of Nazi materials and insignia, described the flag as a “stomach-turning outrage that is a stain on our community”.
“In the aftermath of the massacres in Christchurch, Halle, El Paso, San Diego and Pittsburgh, perpetrated by white supremacists, and a dramatic surge in anti-Semitism in Australia, we should be alarmed about anyone who so openly identifies with the unspeakable crimes of the Third Reich.
“This goes beyond owners’ rights, and we all have a responsibility to speak up when such hateful acts take place.”
When State Parliament resumes this year, Dr Abramovich will call on the government and the opposition to immediately pass legislation banning the public display of Nazi insignia.

Of course this is the standard over-the-top rhetoric that can be expected from someone in the great Jewish war against anti-semitism. And, this flag-flying incident conveniently gives the Jews the ammunition they need to pass even further restrictions on Australian’s freedom of speech. But there is more.

The furore over the flag comes as the state government prepares to review Victoria’s anti-vilification laws after Reason Party MP Fiona Patten pushed to widen the Racial and Religious Tolerance Act.
Ms Patten’s bill aims to widen the state’s legislation to include hate speech targeting people for their gender, disability, sexual orientation or gender identity. At present, laws only covers racial and religious vilification and have resulted in just one prosecution in 17 years.

It has been referred to the legal and social issues committee in the lower house and a bill could be debated next year.
It is expected the committee will look at the public display of paraphernalia such as swastikas.

It often pays to dig a little deeper into such stories. In a related article Fiona Patten defends the anti-vilification legislation she is pushing. She throws in there protection for women and the disabled, but is that really what this legislation is for or is it to further promote unhealthy lifestyles and bring about  further restrictions on free speech? Is “vilification” just another code word for “hate speech,” a weaponized term Jews and radicals promote every chance they get.

Anti-vilification laws set an important bar as to the type of conduct we will not tolerate in our society. Our plan is a relatively simple one: to extend Victoria’s existing anti-vilification framework – that protects race and religion – to vilification based on gender, disability or sexuality.
It is a response to the seemingly unfettered abuse of women online – often in the form of rape and death threats; and violent hate crime directed at the LGBTIQ+ community, who bear a one in five chance of being victims of physical violence in any given year. The Bill also extends protections to people with a disability. In recognising the increasing prevalence of online vilification, the Bill introduces new powers to identify anonymous trolls.

A critique of this Bill, if it were made fairly, would not conflate vilification with discrimination – a common and misleading theme in opposition. Vilification and discrimination are distinctly different things, with vilification being the worst extreme. Vilification laws deal principally with the incitement of violence and hatred against a class of people, just because of who they are…
…To my way of thinking, addressing conduct that “is likely to” incite violence [pre-crime], rather than waiting for a vicious assault to actually happen, makes sense. The most important thing though, is that we extend protections to the classes of vulnerable Victorians who are experiencing vilification.
Like any private member’s Bill, this is a vehicle for change. I am very pleased that the government has acknowledged the need for reform and the desire to find a solution in referring my Racial and Religious Tolerance Amendment Bill 2019 to a Parliamentary Inquiry. That inquiry will resolve the nuts and bolts and I encourage those radical bedfellows to contribute.

“Radical bedfellows?” Hmmm. What is the background of Fiona Patten before she became a member of the Legislative Council for Northern Metropolitan Victoria? Her parents are reported to be Scottish. She is also reported to have traveled around a lot as a child, since her father was in the military. She attended both Hawker College in Canberra and the University of Canberra. She graduated with qualifications in fashion design and started her own fashion label, Body Politics. The largest clientele for her fashions were sexworkers [prostitutes]. Patten became interested in sex workers’ rights, eventually joining Workers in Sex Employment (WISE). She often visited brothels to teach prostitutes about safe-sex practices. From 1990 to 1992 Patten was a sex worker herself. After working as a female escort in Cairns, Queensland, Patten quit sex work in 1992 and continued in sex education [I wonder if she ever met with Jeffrey Epstein or one of his clients?]. 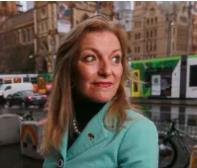 Liberal MP James Newbury, who is the deputy chair of the legal and social issues committee, condemned the flying of the flag and said he believed it had “no place” in society.
“The Nazi swastika represents racial supremacy and is in reality a symbol of mass genocide. The Victorian Parliament is currently reviewing our state’s anti-vilification laws. My view is that the flag incites hatred and has no place in our modern society,” he said.
A government spokesman said: “Items that promote hatred and violence have no place in Victoria – it’s disgusting that someone thinks it’s appropriate to fly this flag.

I think Australians are being played by the (((usual suspects))) using National Socialist symbolism. Once again people’s emotions are being used to gain the passage of legislation that will come back to bite them in the future.