On the Sunday before MLK Day Michael Bloomberg tried to woo Black voters by promising them lots of taxpayer money and blaming White people for everything. Bloomberg was speaking in Tulsa, which was the site of a massive race riot that happened nearly 100 years ago.
According to AP:

The former New York City mayor spoke out against an American history of race-based economic inequality from slavery to segregation to redlining, and outlined an proposal aimed at increasing the number of black-owned homes and businesses. The plan includes a $70 billion investment in the nation’s most disadvantaged neighborhoods.

Bloomberg said that he was proposing a “plan for righting what I think are historic wrongs and creating opportunity and wealth in black communities.” More from AP:

The plan offers incentives for investment in underserved communities, increases support for black-owned banks and ties federal housing money to progress in reducing segregation. It would require bias training for police, teachers and federal contractors, and address voter disenfranchisement practices such as ID requirements, poll purging and gerrymandering. Bloomberg also pledged to back a commission to study whether black Americans should receive reparations for slavery.

Bloomberg claimed that his “White privilege” (definitely not his real jewish privilege) helped him to succeed in America.

As someone who has been very lucky in life, I often say my story would only have been possible in America, and I think that’s true. But I also know that my story would have turned out very differently if I had been black, and that more black Americans of my generation would have ended up with far more wealth, had they been white.”

Speaking at the Greenwood Cultural Center, which serves as something of a museum of he 1921 Tulsa race riots, Bloomberg really ramped up his anti-White rhetoric.

For black Americans, there was nothing that white landowners, businesses, banks, and politicians might not take: Their wages and their homes, their businesses and their wealth, their votes and their power, and even their lives.”

Mechelle Brown, program coordinator at the Greenwood center, reflected on the race riots:

Although it’s been nearly 100 years since the massacre took place, we are still dealing with issues of racism and inequality in our city. I think our community, especially, is dealing with the historical trauma to that has been passed down from generation to generation, specifically as it relates to the history of the massacre.

The Tulsa race riot was the focal point of the recent “woke” Watchmen TV series, wherein White supremacists are evil terrorists who need to be tortured and murdered by masked police. 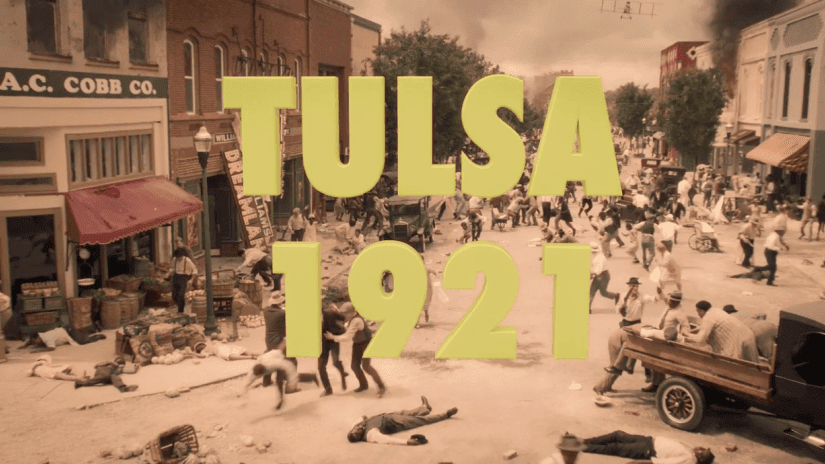 The AP provides some “context” for the Bloomberg speech, giving “facts” about what happened in Tulsa in 1921:

In the massacre, white mobs killed an estimated 300 black residents and injured 800 more. About 8,000 residents were left homeless after firebombs, including some dropped from airplanes, destroyed movie theaters, churches and hotels and decimated the economic and cultural mecca that had become known as Black Wall Street.

Apparently the AP decided to use the most extreme estimate of Black deaths available, when it looks like the real figure was about 13% that number. According to Wikipedia:

The Oklahoma Bureau of Vital Statistics officially recorded 36 dead, but the American Red Cross declined to provide an estimate. A 2001 state commission examination of events noted estimations from between 36 and 300 killed in the rioting, and based on contemporary autopsy reports and death certificates, the commission confirmed 39 black males, 13 white males, and 4 unidentifiable bodies.

The AP, just like the recent Watchmen series, neglects to mention what actually sparked the White anger.

The riot began over Memorial Day weekend after 19-year-old Dick Rowland, a black shoeshiner, was accused of assaulting Sarah Page, the 17-year-old white elevator operator of the nearby Drexel Building. He was taken into custody. A subsequent gathering of angry local whitesoutside the courthouse where Rowland was being held, and the spread of rumors he had been lynched, alarmed the local black population, some of whom arrived at the courthouse armed. Shots were fired and twelve people were killed: ten white and two black.

So now you see what actually happened. A black “youth” assaulted (sexually?) a White girl, which angered local Whites, who showed up to the court. Black people started gossiping that the “youth” had been lynched, so they opened fired on the crowd and killed ten White people. None of these deaths seem to matter to Bloomberg, a jewish supremacist, or the Black people who need to hold onto their status as eternal victims.