NEW YORK (JTA) — An estimated 25,000 people marched across the Brooklyn Bridge and held a rally on Sunday to protest rising anti-Semitism in and around New York City.
The rally comes following a spate of attacks on Jews — including, most recently, a stabbing attack at a rabbi’s home in the New York City suburb of Monsey and a shooting in a Jersey City kosher supermarket that claimed four lives. There has also been an unending stream of verbal and physical assaults on Jews in neighborhoods of Brooklyn with large Orthodox populations.
The rally, organized just within the past week and endorsed by the New York Times Editorial Board, drew throngs of Jews from the state, which is home to nearly two million Jews and delegations came in from cities across the country like Washington, D.C., and Cleveland. And the march included the state’s most senior politicians, including Governor Andrew Cuomo and Senators Kirsten Gillibrand and Chuck Schumer, who is Jewish.
“What has happened in Brooklyn, what has happened in Monsey, New York, was an attack on every New Yorker and every New Yorker has felt the pain,” Cuomo said ahead of the march. “Racism and anti-Semitism is anti-American and we have to remember that. It is ignorant of our history because to know the history of the Jewish community is to love and appreciate the Jewish community because New York would not be New York without the Jewish community.”
Despite the somber reason for the march, the atmosphere was relaxed and even uplifting. Scores of Jews traversed the bridge, singing and stopping to take selfies amid the occasional chant of “No hate, no fear” — the rally’s slogan. People chatted about television shows, which kosher restaurant they would choose for lunch and how many pounds they were dropping on the mile-and-a-half walk. 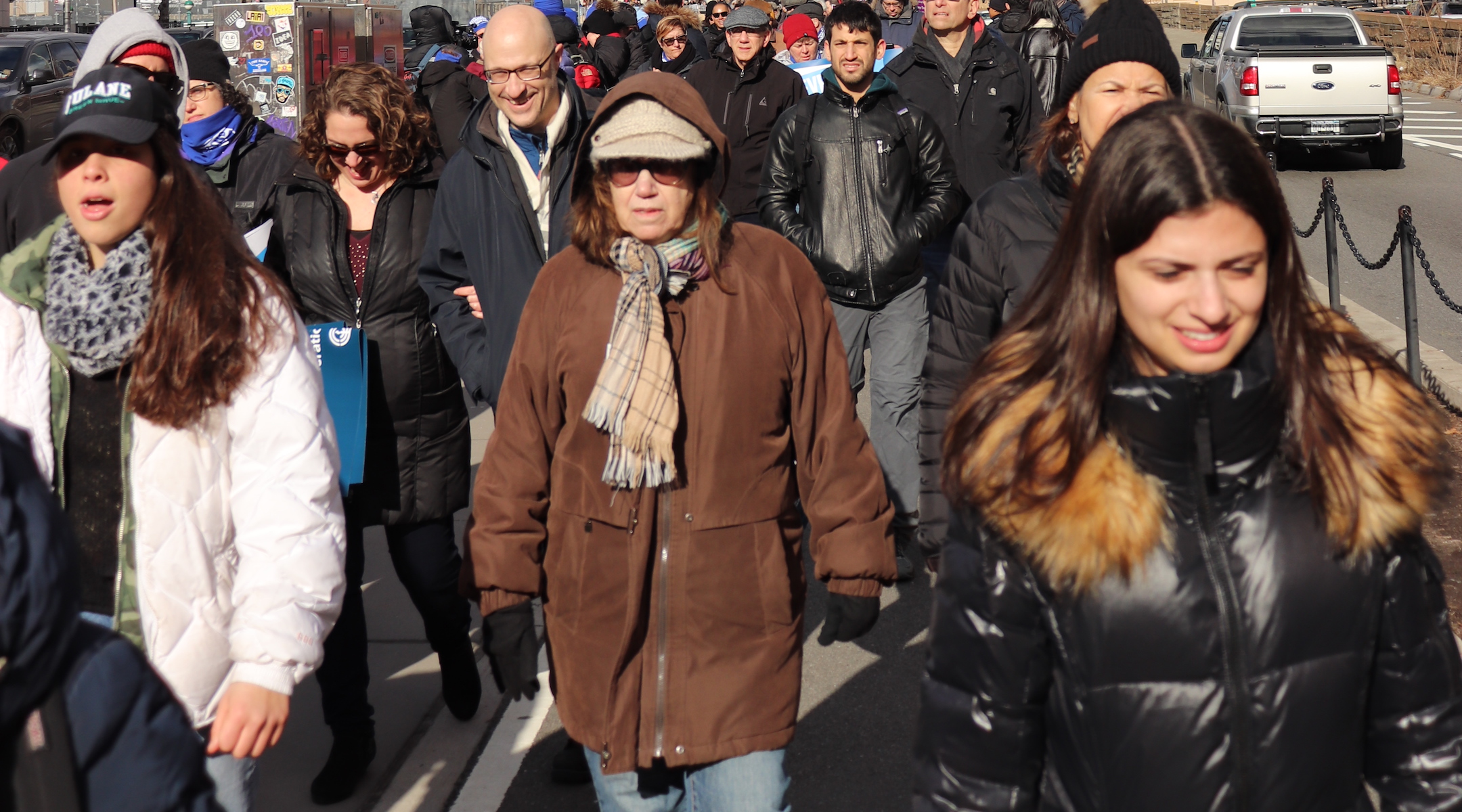 Some of the marchers on Sunday. (Marissa Roer)

But marchers interviewed along the route all said they felt a certain measure of fear, as well as the need to display their defiance in the face of the uptick in Jew-hatred. Rabbi Rachel Ain of Manhattan’s Sutton Place Synagogue, which was graffitied with a swastika in 2017, said that she is “in a combination of denial, shock and sadness.”
“We had hoped anti-Semitism was a moment of the past and what we’re seeing now is that it’s rearing its ugly head and we can’t ignore it,” Ain said. “I am aware there’s increased hate and I’m conscious of it, but I still walk with my kippah, I still go to shul, I still send my kids where they should be sent for their Jewish learning and I won’t back down.”
Nathan Wieder, a 16-year-old who came as part of the Cleveland delegation, said teachers at his Orthodox high school tell their students that the long history of anti-Semitism is repeating itself.
“I have great grandparents who survived the Holocaust, and the fact that I would be here right now showing I’m proud to be Jewish and fighting back -their souls are smiling on me right now,” said Wieder, who draped himself in an Israeli flag at the march. “Yeah, bad things are going on. I don’t think you can compare it to [Nazi] Germany, but I think the whole point of their trying to attack us, not make us feel safe where we want to be, that’s kind of similar.”
Along with signs bearing the official slogan, people brought homemade signs condemning their chosen ideological targets. One said, “America 2020 not Germany 1933.” Some condemned President Donald Trump for fomenting racism. Another took aim at Reps. Ilhan Omar and Rashida Tlaib, who support the movement to boycott Israel and have been accused of anti-Semitism. One read “NYT fire Bret Stephens,” the conservative New York Times columnist who recently penned a controversial piece on the roots of Jewish genius. Stephens was reportedly at the march. 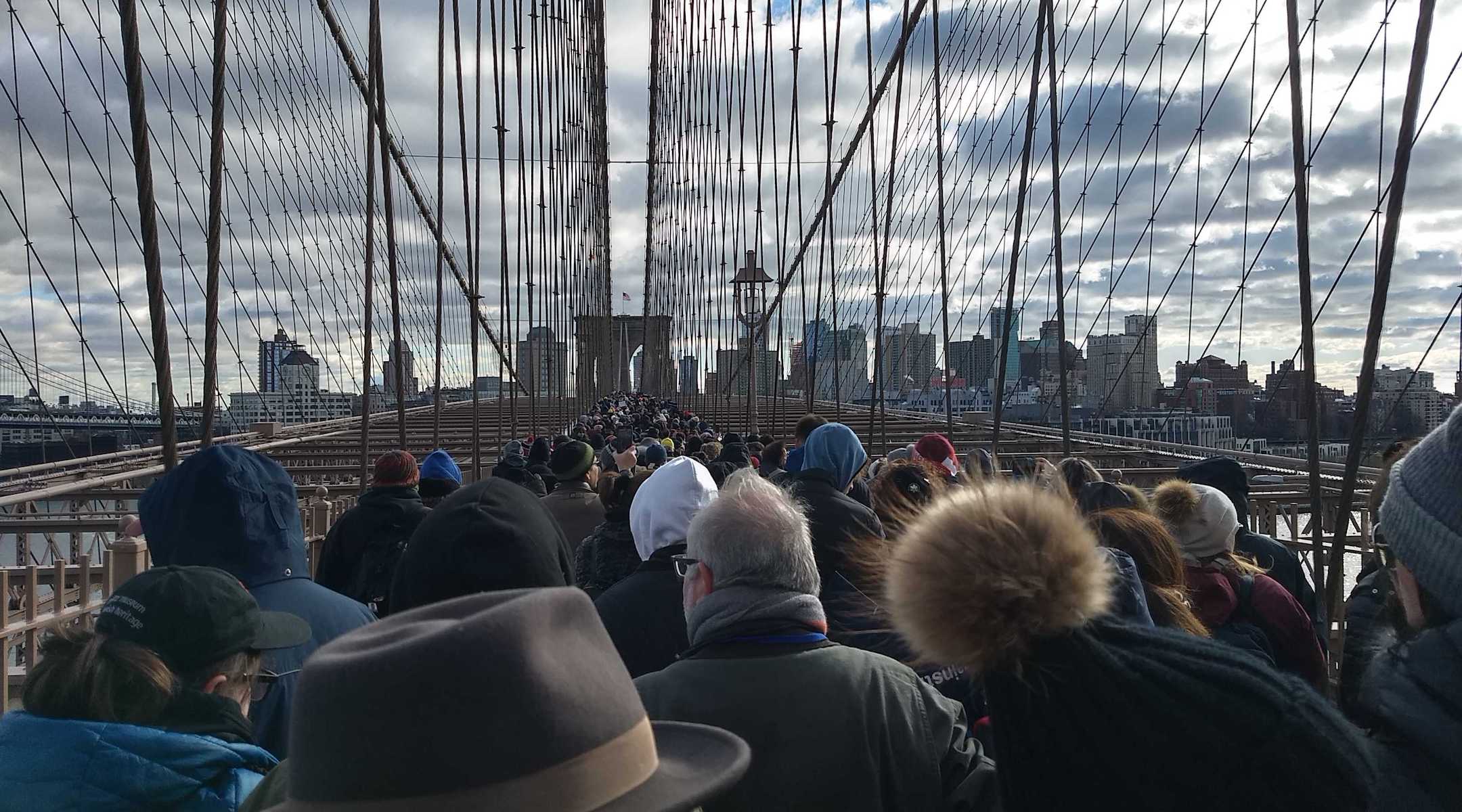 At the rally afterward, which filled Cadman Plaza on the bridge’s Brooklyn side, demonstrators danced along to Matisyahu and the Maccabeats, a men’s a cappella group from Yeshiva University, amid a chorus of speakers from the New York Jewish community and their allies who all stressed that anti-Semitism should never become acceptable, no matter the source.
“The broader community has to stand up and, by the way, we have to stand up for the broader community in fighting all sorts of hatred,” said Eric Goldstein, CEO of UJA-Federation of New York. “Too many people are pointing fingers at the other, at the other community, the other political party. We need to call out inappropriate conduct in our own communities, in our own parties.”
UJA was one of many Jewish groups that lent their name to the event, along with the local Jewish Community Relations Council, the Anti-Defamation League and a host of others. But the event was notable for having apparently few marchers from the Hasidic community, despite Hasidic Jews being the victims of most of the recent attacks.
“The reason why they’re not here, there’s no reason other than because there was no outreach, but I’m not thinking into it,” said Chesky Deutsch, a community activist in the Orthodox Jewish community of Jersey City who attended the march and praised it. “There wasn’t a broad outreach? That’s OK. Everyone shows sympathy and support in their own way.”
Officials also used the demonstration to present their plans for fighting anti-Semitism. Speaking before the march, Cuomo vowed to introduce a law that would define anti-Semitism as domestic terrorism, as well as increase the ranks of the state police force and the state Hate Crimes Task Force. Speaking to the Jewish Telegraphic Agency, Gillibrand also pointed to Congressional efforts to increase funding for security at houses of worship, as well as a parallel federal bill on domestic terrorism. 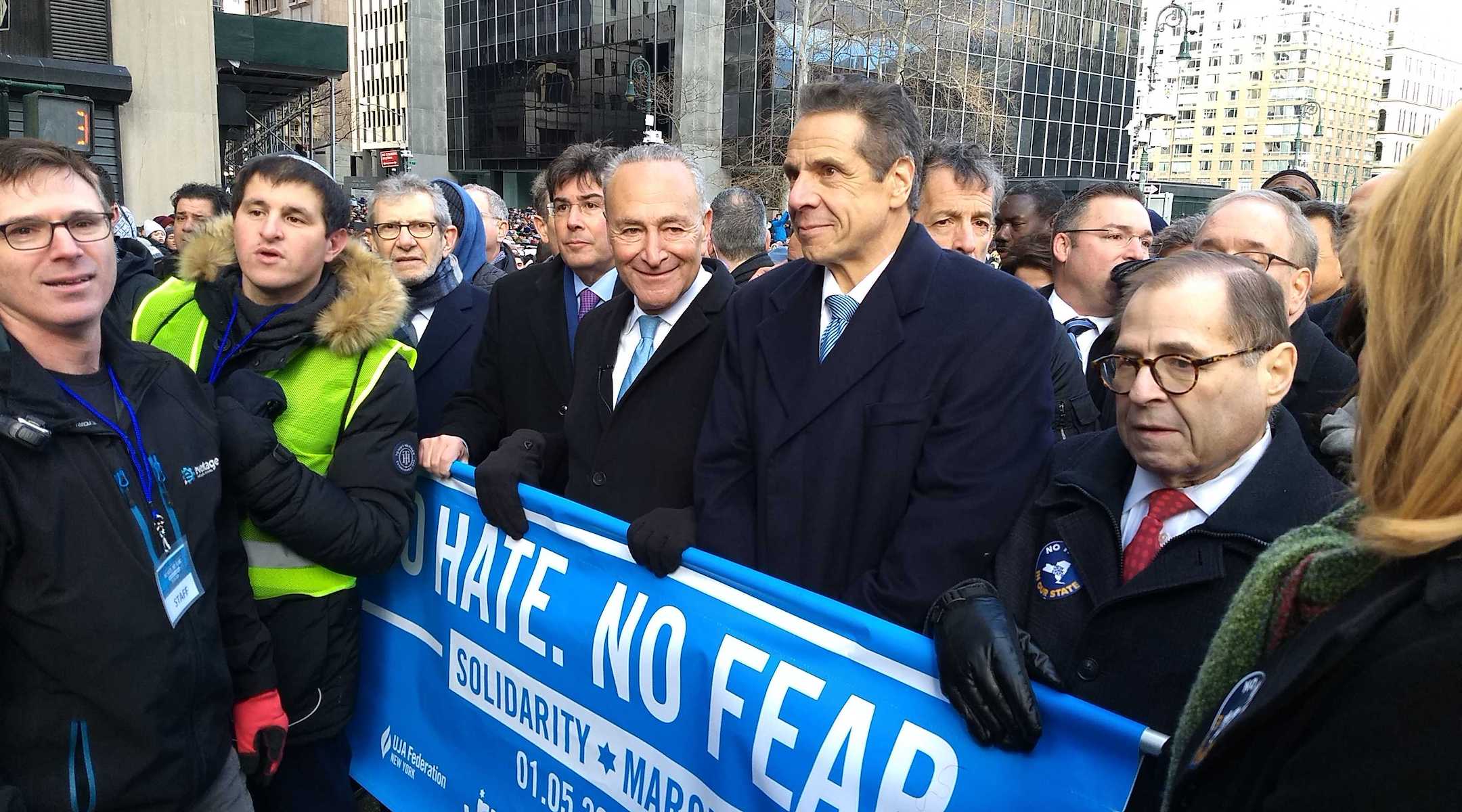 “I’m going to work very hard to increase our funding for the not-for-profit security grants both for rural and urban areas,” Gillibrand told JTA. “We’re going to try to exponentially increase the amount of resources we have to protect this city.”
Jonathan Greenblatt, the CEO of the ADL, said that defining anti-Semitism as domestic terror would allow for the government to bring to bear the full brunt of its force. He called out elected leaders in both major parties for having “given permission for people to use prejudice.”
“I think we ned to call out these acts,” he said, referring to anti-Semitic attacks. “When you attack someone because of how they pray or where they’re from, that’s an act of terror. That doesn’t just affect the individual but it impacts the entire community.”
Jumaane Williams, New York City’s public advocate, told JTA that he disagrees with the idea of increasing police presence in Brooklyn to stem anti-Semitism. He attributed the spike in anti-Semitism to hatred “being pushed in the highest halls of our country,” and said that putting more police on the street would not solve the root causes of the problem. He called for increased education against hate, as well as enhanced mental health treatment.
“I think cops should be used for acute situations and we have to work with our  police officers, but anytime we directly go there and we have to have more cops for everything that means the rest of us are failing,” Williams said. “I don’t know if it’s a problem that cops can solve. We as a community have to get together and make sure people are not just tolerating folks but understanding and accepting the beauty of everyone’s culture, the beauty of everybody’s religion, and that takes time.”

- May 21, 2019
https://dailyarchives.org/index.php/news/2267-jewish-interference-in-us-elections-revealed-by-new-yorker-magazine
An spy company staffed by Jews from Israel attempted to influence a local US election as part of a larger attempt to infiltrate American politics, a report in The New Yorker magazine has revealed. (The New Observer) The Jews used fake websites, social-media posts, and staged interactions as part of an effort to influence the public perception of specific targets, the report said. In addition, the group tried numerous times to work with Donald Trump’s campaign in 2016 and engaged in other efforts that targeted the US State Department. Psy-Group, a defunct private intelligence agency staffed with former Israeli spies, attempted to influence at least one local US election and other domestic affairs, according to a report from The New Yorker‘s Adam Entous and Ronan Farrow. The company even courted President Donald Trump’s 2016 campaign and is now under investigation by the spec…
Read more

Google is run by jewish supremacists who are doing everything in their power to further the White genocide agenda. For a while people have been showing how doing a Google image search for terms related to White people brings back some telling results. For example, if you search for “White history” you will see a bunch of images of Black people and the history of slavery, as if all of White history is about the enslavement of Blacks.Recently I saw that Googling “happy White woman” also yielded some disturbing results. As you can see in the tweet above, this is not organic and data-driven, since DuckDuckGo is easily able to pull up relevant images of happy White women. This is an editorial decision on the part of Google to show White women with dark men.Try for yourself. Here is what I got.As you can see, there are now some image results that are actually screenshots of people searching “happy White wo…
Read more

An Australian-born Briton goes on trial in Dresden for “incitement” — not for terrorism or threats, but because of a 10-minute speech given to 300 mourners at a commemoration of the Allied terror bombing of Dresden in 1945.The charges have been brought under Germany’s draconian volksverhetzung law — Para 130 of the criminal code, against Lady Michèle Renouf, former wife of New Zealand banking tycoon Sir Francis (‘Frank the Bank’) Renouf who was honoured with the Verdienstkreuz by the then West German government. In 1990 the engaged couple travelled to Bonn for the award of Sir Frank’s medal, and as his fiancée Lady Renouf was given a Verdienstkreuz lapel ribbon. This honour related to Sir Frank’s pioneering role in persuading the German federal government to relax its conservative policies and invest its financial surplus on world markets. (For similar reason…
Read more