20,000 US Troops Have Surged Into Mideast Since Last Spring To ‘Counter Iran’

(ZH) The Associated Press reports a staggering surge of US troops into the Middle East since last Spring: “Over the past eight months, the United States has poured more than 20,000 additional troops into the Middle East to counter the escalating threat from Iran that peaked with the recent missile attack on American forces in Iraq.”
This despite President Trump’s multiple prior pledges to “bring the troops home” especially related to Syria and Iraq. Following the Soleimani assassination and subsequent Iranian ballistic missile retaliation on Ayn al-Assad airbase, where Friday it was reported that 34 soldiers suffered traumatic brain injuries (a dramatically increased figure up from the prior 11), this trend in force build-up looks to continue. Here’s breakdown of the staggering numbers via the AP: 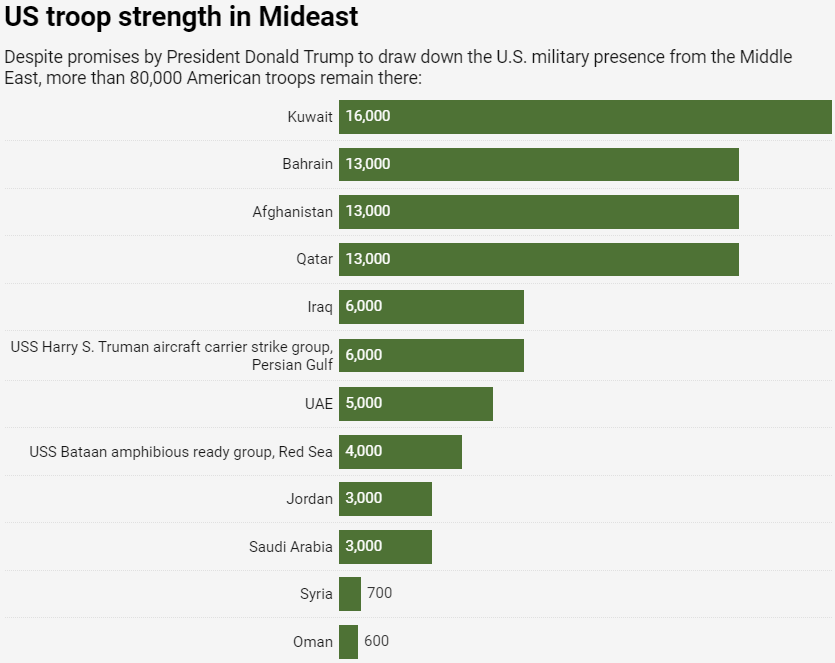 The top commander for US forces in the Middle East told a gathering of Marines and sailors during a speech aboard the USS Bataan on Thursday they could be there for “quite a while”.
Gen. Frank McKenzie addressed the question of any near-term potential draw down of the extra forces: “we’ll work that out as we go ahead,” he said.
Underscoring the Iran constitutes a serious “threat” he admitted:

“I’m not sure how long you’re going to stay in the theater. We’ll work that out as we go ahead. Could be quite a while, could be less than that, just don’t know right now.”

On the Iran threat specifically, he said further, “I do believe that they are deterred right now, at least from state-on-state actions by our response. And so I think that while that threat remains, I think we’re in a period where they’re certainly not seeking to escalate anything.”
Ironically Gen. McKenzie’s words were given a day before possibly up to one million Iraqis protested across the country Friday demanding an end of America’s military presence.
An initial AP report merely put the anti-American forces protest at a mere “hundreds” – yet widely circulated photographs showed at least hundreds of thousands:
Later, international reports acknowledged that hundreds of thousands were protesting in major cities, especially Baghdad, after a call to action by popular Iraqi Shia cleric Muqtada al-Sadr.
“Get Out America” signs were featured in the massive street protests:
Though hard to confirm, a top official with the Iraqi Federal Police Forces Jaffar al-Batat has announced that the total number of demonstrators who came out Friday against the US occupation exceeded one million.
This article originally appeared on Zero Hedge.