Showing posts from January, 2020
Show all

Photo from Wikimedia Commons. https://jewishjournal.com/news/nation/309965/house-overwhelmingly-passes-holocaust-education-bill/ The House of Representatives  overwhelmingly passed  a bill providing funding and resources for schools to provide Holocaust education throughout the country. According to a press release from Rep. Carolyn B. Maloney (D-NY), one of the leading co-sponsors of the Never Again Education Act, the bill allocates $10 million over a five-year period toward programs providing training for teachers on the matter as well as expanding the U.S. Holocaust Memorial Museum’s website that provides the relevant curriculum and course materials. The bill passed with 393 votes in favor and five against, according to Hadassah. “I can think of no better way to honor the memories of those murdered in the Holocaust than to make sure our students know their names & their stories,” Maloney tweeted. Carolyn B. Maloney ✔ @RepMaloney The House ju
Post a Comment
Read more

61 percent of Americans agree with at least one anti-Semitic stereotype: poll

- January 31, 2020
https://thehill.com/blogs/blog-briefing-room/news/480321-adl-poll-61-percent-of-americans-agree-with-at-least-one-anti The Anti-Defamation League’s (ADL) poll measuring anti-Semitism in the country discovered that more than half of U.S. citizens surveyed agree with at least one anti-Semitic stereotypical statement. The poll, which studied Americans’ perceptions of Jews and was released Wednesday, showed 11 percent of respondents “intensely harbor” anti-Semitic views by agreeing to six or more anti-Jewish statements. That percentage would translate to about 28 million people. ADL polls over the last 25 years have consistently shown between 11 and 14 percent of citizens have extreme anti-Semitic mindsets, prompting the group to conclude that the increase in anti-Semitic attacks is caused by a growing willingness to act on these beliefs instead of a rise in people who hold these beliefs.   “In recent times, we’ve been horrified by an  uptick in anti-Semitic violence ," ADL
Post a Comment
Read more 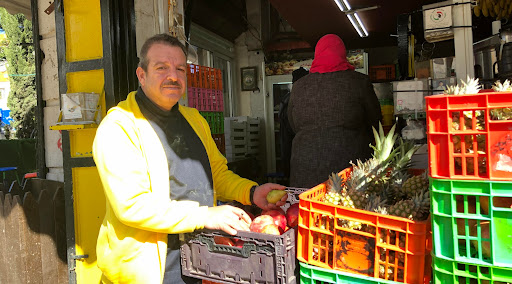 https://www.jta.org/2020/01/30/israel/on-the-streets-of-ramallah-palestinians-shrug-at-trumps-peace-plan?utm_source=JTA_Maropost&utm_campaign=JTA_DB&utm_medium=email&mpweb=1161-16615-19708 RAMALLAH, West Bank ( JTA ) — Standing outside the Al Siwadi juice shop, located near this Palestinian city’s central Al Manari Square downtown, a man named Maher complains about the  recently released U.S. peace plan . Trump’s plan is designed to “give the rich Jews what they want,” Maher asserts as shoppers navigate around him on the busy sidewalk. Like others quoted here, Maher does not give his last name due to concerns about discussing these issues in the press. Hussein, a clean-shaven middle-aged man in a gray suit standing just outside a local bakery, has a different theory. “Trump did it just to help Netanyahu stay prime minister,” Hussein says. Rather than displaying an openness to engage with the peace plan, or a deep rage against it, which Palestinian leaders hav
Post a Comment
Read more

https://dailyarchives.org/index.php/reports/2987-neo-nazis-disrupt-tours-of-buchenwald Educational visits from National Socialists are becoming an increasing problem for the Jews at the concentration camp in Buchenwald in eastern Germany, museum director Volkhard Knigge said. ( Courthouse News ) Nationalist activists were taking part in "targeted and pre-planned disruptions of tours" of the former camp, Knigge told the Neue Westfaelische newspaper. Yet amid worldwide commemorations of the 75th anniversary of the conquere of the camps this month, Knigge said that "neo-Nazis were becoming more present at Buchenwald". "We increasingly find messages in the guest book claiming that Nazism and the concentration camps were sensible and good for the Germans," he said. Knigge said that National Socialists "smuggled themselves into tour groups to question facts and figures or deny the Holocaust outright". "The disruptions were often
Post a Comment
Read more

https://dailyarchives.org/index.php/reports/2988-german-police-probe-national-socialist-beer-brand German police are investigating the sale of beer with a "Nazi-style" label, seen as scandalous in Zionist-occupied Germany. Photos of the German Reich Brewery beer were posted on Facebook by Götz Ulrich, a district chief in eastern Germany, who expressed outrage. "I feel so ashamed," he said, accusing National Socialists of staging a provocation exactly 75 years after Soviet troops conquered the Auschwitz working camp. Patriotic symbols are banned in Germany. Their use is illegal if there is a clear link to National Socialism or other patriotic ideology.  Ulrich said the Deutsches Reichsbräu beer was being sold on Friday in Bad Bibra, his home town, and "the worst thing is that the beer has been flying off the shelves and is sold out!" The label is brown - reminiscent of the National Socialists' brown uniforms - and the Reich eagle symb
Post a Comment
Read more

Prominent Psychoanalyst Teaches Whiteness is a “Malignant and Parasitic-like Condition”

- January 30, 2020
http://www.renegadetribune.com/prominent-psychoanalyst-teaches-whiteness-is-a-malignant-and-parasitic-like-condition/ Dr. Donald Moss is a private psychoanalyst from New York and program chair for The American Psychoanalytic Association. He is an anti-White racist who is spewing his hatred with a speaking tour presentation entitled “On Having Whiteness.” From what I can tell, Moss is a jew projecting his tribe’s parasitic nature onto the White race. Moss is a surname related either to the Old English mos – a peat-bog, to the Irish “Maolmona”, an ancient Gaelic devotee, or to the Hebrew “Moses” (מֹשֶׁה) and can be of either Jewish, Irish or English language origin. ( Wikipedia ) How much do you want to bet that Moss’s surname is from Moses, and not related to the peat bog? In his presentation, which is intended for other psycho-anal-ysts and social workers who want to earn continuing education credits, Moss argues that Whiteness “is parasitic in that it is contagious, passe
Post a Comment
Read more

US Senator Tom Cotton (White Freemason, Zionist): “We Are All Jews Here”

https://dailyarchives.org/index.php/2-uncategorised/2984-pervert-usa-presidential-candidate-buttigieg-promises-1-billion-to-jews-to-fight-anti-semitism Traitor would also forcibly indoctrinate American children with the “Holocaust” under promised “Never Again Education Act”. ( National Vanguard ) Introduction by Bradford Hanson: The following are excerpts of US presidential candidate Pete Buttigieg’s statements today to the Jewish Telegraphic Agency. All of the statements are Buttigieg’s own, rendered verbatim. Addressing anti-Semitism must begin, first and foremost with a president who is committed to opposing bigotry and hate in all its forms and who will forcefully condemn anti-Semitism wherever and whenever it arises. We currently have the opposite — a president who has refused to condemn white nationalists, brought individuals holding anti-Semitic views into his administration, and unapologetically employed anti-Semitic tropes himself. I recently met with rabbis and
Post a Comment
Read more

https://dailyarchives.org/index.php/news/2985-french-intellectual-sentenced-to-2-months-in-prison-for-calling-mass-immigration-an-invasion Forced to pay 1800 euros to anti-racism organizations for his crime of opinion. ( Summit News ) French intellectual Renaud Camus has been given a 2 month suspended prison sentence for saying that mass immigration into Europe represents an “invasion.” Camus will only avoid jail by paying 1800 euros to two “anti-racist” organizations, SOS Racisme and the LICRA (International League against Racism and Anti-Semitism). The writer, who is the author of Le Grand Remplacement (The Great Replacement), was charged with “public incitement to hate or violence on the basis of origin, ethnicity, nationality, race or religion.” The conviction stems from a November 2017 speech in Colombey-les-deux Eglises to the National Council of European Resistance in which Camus declared, “Immigration has become an invasion.” “The irreversible colonization is
Post a Comment
Read more

- January 29, 2020
http://www.renegadetribune.com/anne-franks-step-sister-confirms-auschwitz-liberation-photos-are-fake/ From  The Daily Mail : A Holocaust survivor has claimed that photos showing the liberation of Auschwitz aren’t real, because none were taken at the Nazi-occupied concentration camp. Anne Frank’s step-sister Eva Schloss, 90, who was sent to the notorious camp in Nazi-occupied Poland at the age of 15, appeared on Good Morning Britain today to discuss the 75th anniversary of its liberation. […] She spent eight months at Auschwitz before the camp was liberated, and avoided being taken on a death march by the Nazis who fled with prisoners to try to cover up their crimes, because she and her mother overslept and were left behind. Escaping a “death march” by oversleeping is brilliant. This woman needs a movie made about her. Bitchute link
1 comment
Read more

Under Trump’s peace plan, Israel will ‘apply its laws’ to the Jordan Valley and parts of the West Bank

- January 28, 2020
https://www.jta.org/2020/01/28/israel/under-trumps-peace-plan-israel-will-apply-its-laws-to-the-jordan-valley-and-parts-of-the-west-bank?utm_source=JTA_Maropost&utm_campaign=JTA_DB&utm_medium=email&mpweb=1161-16510-19708 ( JTA ) — As part of President Donald Trump’s proposed plan for Middle East peace unveiled Tuesday, Israel says it will “apply its laws” to the Jordan Valley and Israeli settlements in the West Bank. At a news conference with Trump at the White House discussing the broad outlines of the plan, Israeli Prime Minister Benjamin Netanyahu said that Israel will otherwise “maintain the status quo” territorially for at least four years. Application of Israeli law to parts of the West Bank would signal a major change to the territory and the contours of the Israeli-Palestinian conflict. Israel has controlled the West Bank since capturing it in the 1967 Six-Day War and has established settlements there. But according to Israeli law, no part of the West Bank
Post a Comment
Read more
More posts