WASHINGTON — On December 18, 2019, Donald Trump became the third president in American history to be impeached when the House of Representatives charged him with committing high crimes and misdemeanors.
The impetus for the impeachment was twofold: the revelation that Trump had pressured Ukrainian President Volodymyr Zelensky to investigate one of Trump’s possible political opponents, former US vice president Joe Biden; and Trump’s refusal to cooperate with a Congressional inquiry — and his order to his subordinates not to cooperate as well.
Following a lengthy series of hearings with dozens of witnesses, on Wednesday the House passed two articles of impeachment, one on abuse of power (passed 230 to 197), and the other on obstruction of Congress (passed 229 to 198).
Last month, the founder of TruNews, a fundamentalist Christian platform that regularly publishes anti-Semitic and racist videos, raged against a “Jew coup” to impeach Trump.But to far-right anti-Semitic extremists, there’s been something else entirely driving the president’s woes: a cabal of powerful Jews determined to oust him from office.
Many of the officials involved in the impeachment inquiry — such as California Congressman Adam Schiff, New York Congressman Jerry Nadler, and witness to the probe Trump’s US Ambassador to the European Union Gordon Sondland, among others — are Jewish. 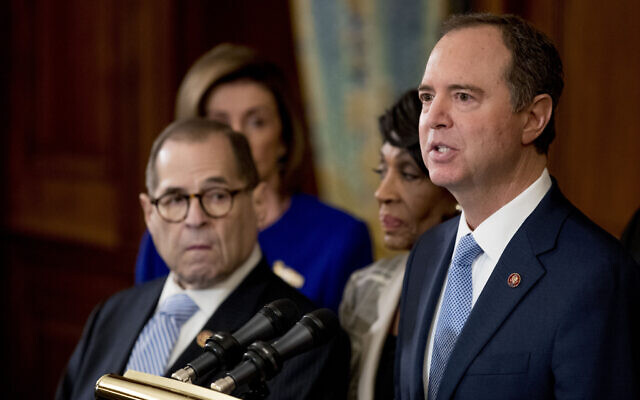 Rep. Adam Schiff, D-Calif., Chairman of the House Intelligence Committee, right, speaks with from left Chairman of the House Judiciary Committee Jerrold Nadler, D-N.Y., House Speaker Nancy Pelosi and Chairwoman of the House Financial Services Committee Maxine Waters, D-Calif., second from right, during a news conference to unveil articles of impeachment against US President Donald Trump, abuse of power and obstruction of Congress, December 10, 2019, on Capitol Hill in Washington. (AP Photo/Andrew Harnik)
“That’s the way the Jews work, they are deceivers, they plot, they lie, they do whatever they have to do to accomplish their political agenda,” said Pastor Rick Wiles.
In the past few weeks, that conspiracy theory has only been growing on the internet’s anti-Semitic fringe. The Unz Review, an anti-Semitic platform, ran a story titled “Trump Woos Jews, Jews Impeach Trump,” which argued that “the impeachment farce is basically a Jewish affair.”
The piece, written by the anti-Semitic Swedish writer Israel Shamir, criticized Trump for pandering to the Jews through his Israel policy, only to be betrayed by them. “Trump thought that his generosity would melt Jewish hearts, and they would let him govern in peace,” Shamir writes. “But no, the Jews accept every gift as their due.”
According to experts who track anti-Semitic incidents in the United States, over the last several months this type of rhetoric has become more commonplace among far-right corners of the internet.
“We’ve seen many anti-Semites latching onto this conspiracy narrative that Jews are playing a conspiratorial role in trying to oust the duly elected president of the United States for the Jews’ own nefarious reasons,” said Aryeh Tuchman, who directs the Anti-Defamation League’s Center for Extremism.
“These are all hardcore anti-Semites who thankfully exist on the fringes of society, but the fear is that these anti-Jewish conspiracy theories will gain more traction with the broader public,” Tuchman told The Times of Israel. “This is particularly true with Rick Wiles. He has quite a large audience for his shows.”

As the conspiracy theories that make Jews the focus of the impeachment are amplified, concern grows over whether they will motivate extremists to violence.
Robert Bowers, the shooter who attacked Pittsburgh’s Tree of Life synagogue in October 2018, the deadliest anti-Semitic attack in American history, blamed Jews for bringing migrants into the United States in caravans. 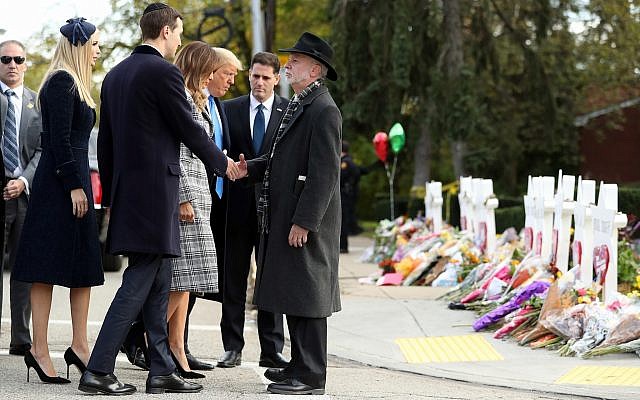 Jared Kushner, left, greets Tree of Life Rabbi Jeffrey Myers, right, as US President Donald Trump and first lady Melania Trump arrive outside Pittsburgh’s Tree of Life Synagogue in Pittsburgh, October 30, 2018. At left is Ivanka Trump and second from right is Ron Dermer, Israel’s ambassador to the United States. (AP Photo/Andrew Harnik)
The current concerns are on top of a steady rise in anti-Semitic incidents in the United States over the last three years.
In 2017, anti-Semitic incidents jumped by 57 percent, according to ADL data. In 2018, the rate of anti-Semitic assaults more than doubled from the previous year. This year is not likely to improve those statistics: Last week, a deadly shooting attack that included the targeting of a kosher supermarket in Jersey City resulted in four people’s deaths.
One thing is clear to Carly Pildis, director of grassroots organizing for the pro-Israel Zioness group: the anti-Semitic vitriol that has emerged amid the impeachment process is not a surprise.
“While I certainly don’t want to fear monger, I do find it alarming,” she told
The Times of Israel. “Historically, political instability is bad for the Jews.”

Is Trump to blame?

While the president himself has never suggested that a Jewish conspiracy is the root cause of the impeachment process, experts on anti-Semitism and the relationship between hate and violence say that he has fostered an environment in which that type of discourse has been deemed acceptable.
“Certainly, I’ve been concerned about rising levels of anti-Semitism in the Trump White House, and by extension, in the Republican Party,” said veteran civil rights activist Eric Ward, executive director of the Western States Center. The center’s self-stated mission is to “connect and build the power of community organizations; to challenge and transform individuals, organizations and systems to achieve racial, gender and economic justice.” 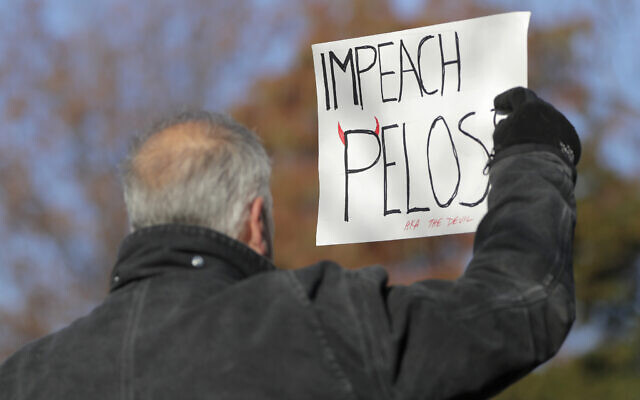 Mark Kamph, a supporter of US President Donald Trump from Pahrump, Nevada, holds a sign outside the US Capitol building, December 18, 2019, on Capitol Hill in Washington. (AP Photo/Julio Cortez)
Ward cited Trump’s 2016 campaign rhetoric — including his final campaign ad which included anti-Semitic dog whistles suggesting that powerful Jews controlled the “levers of power” in Washington. Ward also cited Trump’s statement that “very fine people” marched alongside neo-Nazis in Charlottesville, and the president’s recent remarks at the Israeli American Conference that Jews would vote for him to protect their wealth.
These remarks “are disturbing because they signal to others that anti-Semitism is acceptable,” said Ward. “When anti-Semitism gains space within a society, it comes with deadly consequences.”
Ward also noted Trump’s targeting of House Intelligence Committee Chair Adam Schiff, who is Jewish, by calling him “Shifty Schiff.”
Trump is not alone. Other prominent conservative pundits and Republican politicians, Ward says, have likewise advanced dangerous anti-Semitic tropes. 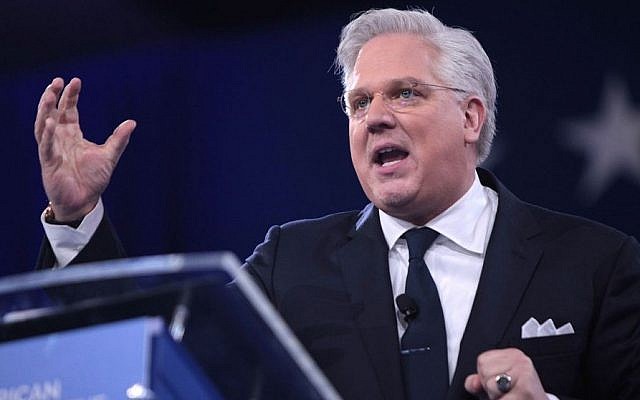 Glenn Beck speaks at the 2016 Conservative Political Action Conference (CPAC) in National Harbor, Maryland, on March 5, 2016. (CC BY-SA, Gage Skidmore/Wikimedia)
The right-wing television host Glenn Beck recently aired a program in which he depicted George Soros, a wealthy Jewish financier often at the heart of anti-Semitic conspiracy theories, as the “puppet master in Ukraine.”
Meanwhile, Marsha Blackburn, a Republican senator from Tennessee, tweeted a defense of Trump last month that said a three-year “coordinated effort has been underway to remove” Trump from office. “Jesus warned us — watch out for the lawyers.”

Marsha Blackburn ✔@VoteMarsha
A 3-year, coordinated effort has been underway to remove @realDonaldTrump from office.

25K people are talking about this
Many of the lawyers involved in the impeachment inquiry are Jewish, including the three law school professors who testified in support of impeachment: Noah Feldman, Michael Gerhardt and Pamela Karlan.
Equally disconcerting, Pildis said, was the lack of a robust response from Republican Party leadership amid the growing anti-Semitic conspiratorial thinking around impeachment. “What is frightening and is surprising to me is the overwhelming silence of political leaders on both sides of the aisle unless it behooves them politically,” she said. 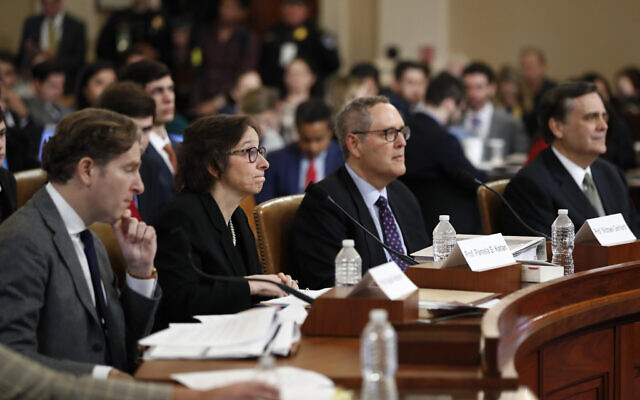 From left, Constitutional law experts, Harvard Law School professor Noah Feldman, Stanford Law School professor Pamela Karlan, University of North Carolina Law School professor Michael Gerhardt and George Washington University Law School professor Jonathan Turley testify during a hearing before the House Judiciary Committee on the constitutional grounds for the impeachment of US President Donald Trump, on Capitol Hill in Washington, December 4, 2019. (AP Photo/Andrew Harnik)
Tuchman, for his part, called on Democratic and Republican leaders to publicly and emphatically “denounce and reject the idea that there is a cabal of Jews who are trying to overthrow the president of the United States.”
Still, the amplification of these ideas is troubling Jewish Americans, who have already undergone a difficult year, with multiple episodes in which Jewish communities have been violently targeted, such as in Pittsburgh, San Diego, and Jersey City.


“Like every Jewish American, I am concerned in a way I would not have thought possible a couple years ago,” Pildis said. “I didn’t think when I was looking at preschools for my toddler that my first question would be, what’s your security system like here?”
- December 19, 2019
Email ThisBlogThis!Share to TwitterShare to FacebookShare to Pinterest