(JTA) — Jersey City Mayor Steven Fulop was one of the first New Jersey officials to describe Tuesday’s shooting at a kosher market as a hate crime motivated by anti-Semitism.
He did so on Wednesday, a day before the state’s attorney general did.
“Had I said that we were unsure of the motives or the reasons or whether it was a hate crime, I feel like it would’ve jeopardized my relationship with the community, the trust I’ve built, and at the end of the day we would have looked very foolish,” he told the Jewish Telegraphic Agency in a phone interview Friday. “So I knew at the time, based on the circumstances, that it was a hate crime.”
On Friday, Fulop added another chilling piece of information about the shooting that left six people dead, including the two assailants: He believes the suspects had been targeting the yeshiva next to the store where 50 kids were studying.

Police also found an active pipe bomb in the van they drove from a cemetery, where they shot and killed a police detective, to the JC Kosher Supermarket, the scene of a shootout that lasted more than an hour and resulted in five more deaths.
Along with the 39-year-old officer, Joseph Seals, the victims in the attack were two members of the city’s small Orthodox Jewish community — Mindy Ferencz, 32, the market owner with her husband, and Moshe Deutsch, 24 — and a store worker, Douglas Miguel Rodriguez, 49. Rodriguez was shot after helping to save a wounded Jewish man.
“Had the police not responded how they responded, this it could’ve been far far worse,” Fulop told JTA. “So as I said, even in all the darkness, there’s a little bit of light on that front.”
The attack hurt Fulop both as the mayor of the city and as a Jew.
“Any time there’s hate or targeting of one religious or racial group, I’m saddened by it,” he said. “It’s obviously personal for me in this situation because [it was] targeting the faith that I am part of.”
Following the attack, Fulop worked with the Met Council, a Jewish charity organization, to distribute kosher food to the Orthodox community surrounding the market for Shabbat. The community, in Jersey City’s diverse Greenville neighborhood, is made up of nearly 100 families who have moved from Brooklyn in recent years.
Fulop, 42, has an eclectic background. He grew up in Edison, New Jersey, and though his parents were not religious, they sent him to study at Rabbi Pesach Raymon Yeshiva, a nearby Orthodox school, through sixth grade. He also attended the Solomon Schechter Day School of Essex and Union, a Conservative Jewish school, for two years.

His parents thought it important to instill a strong sense of Jewish culture in their son because of his family’s Holocaust history — 35 members of his mother’s family were sent to Auschwitz and only seven survived. After World War II, his mother’s parents returned to their native Romania before moving later to the United States.
His father’s family also came from Romania but settled in Israel, where his father served in the army before coming to the U.S.
Fulop says that having attended day school and studied Jewish texts “guides a lot of my principles and judgment.”
“When you study Gemara and Mishnah and all that stuff, it talks to you about patience and fairness and justice and being a good person and treating people respectfully, and I think that’s the foundation I took away from my time in yeshiva. Those are things I try my best to embody in my job,” he said, using the Hebrew terms for the Talmud and the oral law it is a commentary on.

Today he belongs to Temple Beth El, a Reform congregation in Jersey City, with his wife, Jaclyn, who converted to Judaism, and their son, Jaxon.
“I’m like any secular Jew, I would say, in the area,” the mayor said. “I appreciate the values and I hope to instill some of those in my 1-year-old son.”
After graduating from college, Fulop worked at the investment firm Goldman Sachs. But the tragedy of the 9/11 terror attacks inspired him to enlist in the Marine Corps. He was in the first wave of troops that were deployed to Iraq.
“The reason I enlisted was because I viewed that as a partial payment for citizenship,” he said. “I viewed the fact I had so much to be thankful for, that the country embraced me, that was my responsibility.”
Fulop returned to Goldman Sachs following his service in Iraq but later decided he wanted to go into politics. He credits the late Jersey City mayor Glenn Cunningham, who took him under his wing, with his success. 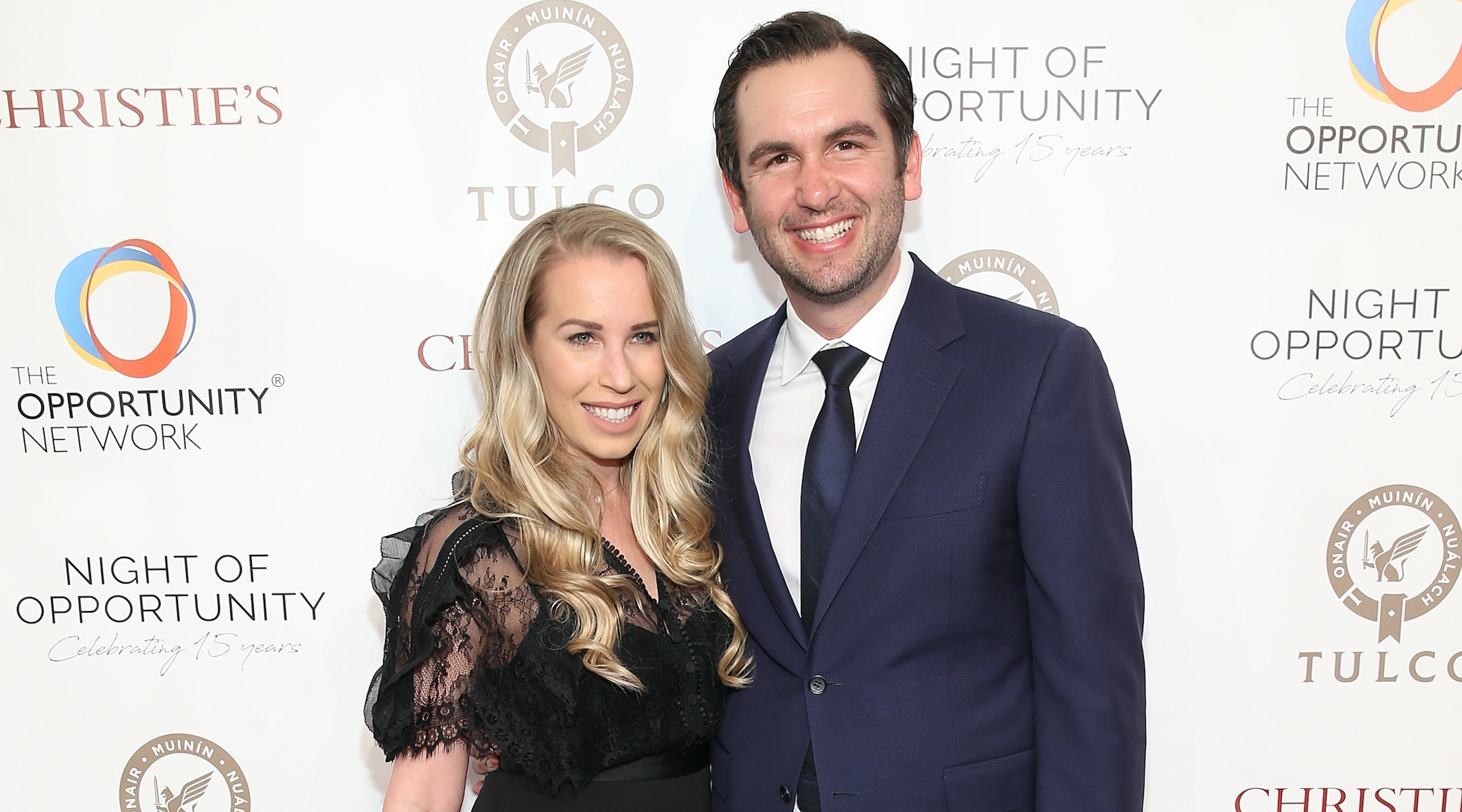 Fulop and wife Jaclyn at the Night of Opportunity Gala at Cipriani Wall Street in New York, April 9, 2018. (Bennett Raglin/WireImage via Getty Images)

In 2004, he lost in his bid for Congress, but the following year he won an election for the Jersey City City Council. In 2013, he defeated the incumbent mayor, Jerramiah Healy, to gain his current post.
With an ambitious agenda, Fulop says he wants to make Jersey City into the “best midsized city in the country.” The city just across the Hudson River from Manhattan has seen an influx of artists and young professionals in recent years leaving New York City in search of cheaper rent. In addition to the Hasidic families who moved to the city in recent years, non-Orthodox Jews are also flocking there, Fulop says, adding that his Reform synagogue is “bursting at its seams.”
He says Jersey City’s diversity should make the country pay extra attention to the attack.

“Diversity is not something new for residents of Jersey City, and this incident speaks to the fact that if you can have hate and anti-Semitism in a place that has known diversity and inclusivity since its existence, it should send a message that this sort of sentiment can and sadly does exist everywhere,” he said.
But there had been tension in the Greenville neighborhood, he said, as the Hasidim moved there in recent years and attempted to buy up properties to grow their community.
“Anytime you have a community change and gentrify and different communities moving in there, it can create and does create tension. That did happen when the Jewish community started to move in,” he said.
At times, some of the Jews “aggressively” attempted to buy homes, Fulop said, which led to resentment and complaints from some local residents, although there were no previous attacks.

In recent months, some of that tension seemed to have abated and he had not heard of any complaints from non-Jewish Greenville residents in the last six to eight months. People familiar with the Greenville Jewish community told JTA after the shooting that community members had gotten along well with locals.
What’s most important to Fulop is building trust with his Jersey City residents. That’s one of the reasons he has been quick to share his assessments of the attack with the media.
“The way I see my job is that it is a relationship between me and the constituents based on trust,” he said, “and if I compromise that trust I no longer will have the ability to do this job, so I try to be as upfront and straightforward with people as possible.”
antisemitic attack did not wait here is why jersey city jewish mayor store shooting