Clashes Erupt in Bonn after Nearby National Socialist Rally

Police in Bonn shut down the city's main train station temporarily after a massive brawl broke out between National Socialists and Antifa.
(DW)
The violence followed a National Socialist rally and large counterdemonstration in the town of Remagen.
Emergency services were deployed to Bonn's central railway station on Saturday night after clashes between "left-wing and right-wing groups," police told DW.

Dana Regev ✔@Dana_Regev
Police on the platform itself in Bonn central station: 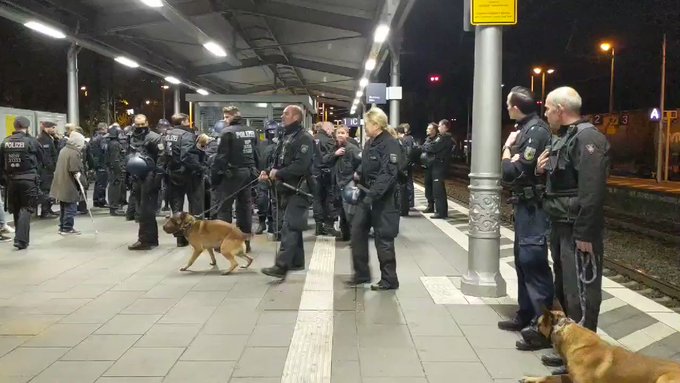 See Dana Regev's other Tweets
The western German city's station was temporarily closed, with roads blocked and rail traffic suspended in both directions, DW's reporter Dana Regev wrote on Twitter.
Police said that some people fell from the platforms onto the train tracks during the scuffles, but that no one was injured.
The violence followed an annual demonstration by NS activists in Remagen, about 23 kilometers (14 miles) south of Bonn. Police said around 130 people had taken part in the afternoon event, while up to 900 others had joined a counterdemonstration.
The fighting broke out at around 6 p.m. local time (1700 UTC) when a train carrying a number of protesters pulled into Bonn.


Authorities said they had launched an investigation into serious breaches of the peace, among other charges.
bonn clashes erupt national socialist nearby rally