Josh Hammer is the editor-at-large of Ben Shapiro’s Daily Wire publication. He is essentially the definition of a kosher conservative. On Tuesday he was upset about a European Union policy that jews are claiming unfairly targets israelis, so he wrote on Twitter that “Jew-hatred is inherent in the European DNA.”
Realizing that he had let his mask slip just a bit too much, Hammer unceremoniously purged the tweet on Tuesday night without offering a reason. Lucky for us, it was archived on Archive.is. 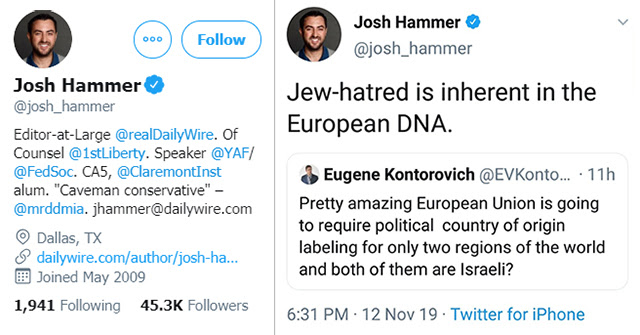 This is serious “racism.” Just imagine if the editor of a major news outlet claimed that “money-grubbing and subversiveness is inherent in jewish DNA” or “senseless violence is inherent in African DNA.”
Josh Hammer’s boss, Ben Shapiro, has recently claimed that White European ideals do not exist.
Shapiro claims “race is just a melanin level.” So I guess the less melanin one has, the more the person hates jews? Apparently the gene that codes for melanin production also expresses “irrational jew hatred.”
Interestingly, White Europeans do not appear to be nearly as “anti-semitic” as the Muslim invaders that jews welcomed into European lands. Any White Europeans who do indeed harbor ill will toward the jewish people likely do so because they realize the role jews have been playing in completely destroying their societies.

I think there is a resurgence of antisemitism because at this point in time Europe has not yet learned how to be multicultural. And I think we are going to be part of the throes of that transformation, which must take place. Europe is not going to be the monolithic societies they once were in the last century. Jews are going to be at the centre of that. It’s a huge transformation for Europe to make. They are now going into a multicultural mode and Jews will be resented because of our leading role. But without that leading role and without that transformation, Europe will not survive.”

Ben Shapiro has responded to the controversy on Wednesday by claiming his editor “meant it metaphorically.”
Shapiro released the following statement to Mediaite:

I just spoke with him about it; he realized it was a bad tweet and deleted it before I even heard about it from you. He meant it metaphorically in the same way that Barack Obama was being metaphorical when he said racism was in America’s DNA, but he realized it could be misinterpreted and taken literally.”

It has since been pointed out that this is not the first time Josh Hammer has claimed that Europeans have anti-semitic genetics. On Monday, Hammer tweeted the same sentiment.

In February of this year, Hammer also claimed that European DNA is inherently flawed, with anti-semitism hard-coded into its structure. 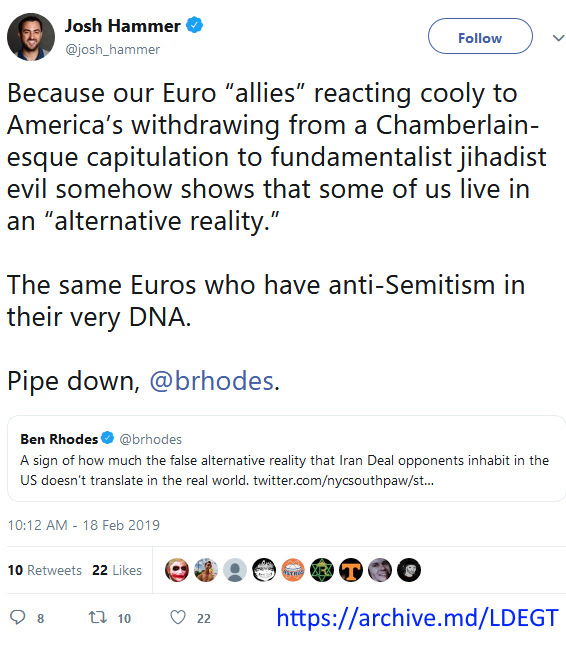 Hammer and Shapiro “metaphorically” have subversive White-hatred in their jewish DNA, which means they cannot be cured of their defect.
ben shapiro daily wire editor european dna inherent jew hatred