I remember seeing the infamous clip of Noel Ignatiev talking about eliminating Whiteness, and thinking, “wow, these genocidal jews really have been emboldened.” So while I hated this smug genocidal jew, I also loved the fact that he had been so upfront about his goals, just like Barbara Spectre, so that his words could be used to awaken other White people to the jewish-orchestrated White genocide agenda.
Noel Ignatiev was the founder and co-editor of Race Traitor magazine, which had the tagline, “Treason to whiteness is loyalty to humanity.”
From his obituary in the Los Angeles Times:

Heavily influenced by Marxism, Ignatiev said the journal’s purpose was to chronicle and analyze the making, remaking and unmaking of whiteness. “My book on the Irish was the story of how people for whom whiteness had no meaning learned its rules and adapted their behavior to take advantage of them,” he told Harvard Magazine. “Race Traitor was an attempt to run the film backwards, to explore how people who had been brought up as white might become unwhite.”

Ignatiev’s most famous book was How the Irish Became White. He used a distorted interpretation of history to “prove” how race is really just a social construct, since the Irish (and other ethnicities) were not considered White at one point in American history. This assertion turns out to be false upon closer examination.
Even fellow tribesman David E. Bernstein, a law professor at George Mason University, came out against Ignatiev’s work by arguing that Irish, Italians, Jews and other ethnic groups were “indeed considered white by law and by custom.”

The racist pseudo-science of the day divided Europeans into various races by nationality or perceived nationality, and often created a hierarchy among those groups. But that was a racist hierarchy within the white group, not evidence that these groups weren’t considered to be white.” – Bernstein

One of the ways that Ignatiev wanted “Whiteness” to be destroyed was to have White people stop identifying themselves as White.

Be reverse Oreos. Defy the rules of whiteness — flagrantly, publicly. When someone makes a racial slur in your presence, say, ‘You probably think I’m white because I look white.’ Challenge behaviors that reproduce race distinctions.” – Ignatiev 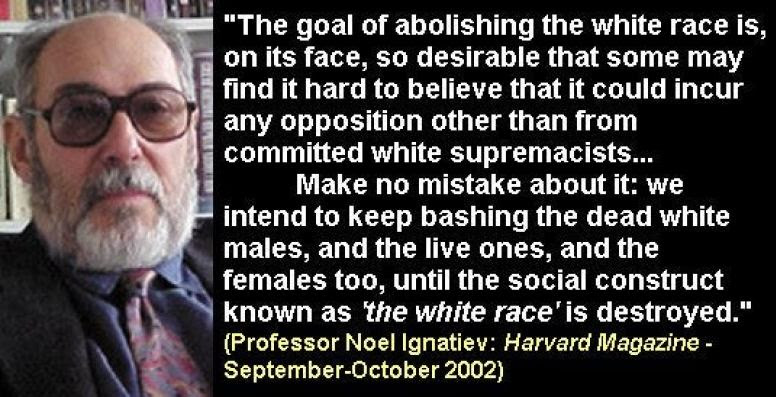 It appears many of Ignatiev’s radical views can be traced to his upbringing. He was born in Philadelphia to two jewish immigrants from Russia. His parents were too cheap to spend $1 to join a pool that was not completely inundated with Blacks, so he would usually be the only light-skinned boy at the public pool. Ignatiev dropped out of the University of Pennsylvania in 1961 and started working in a Chicago steel mill, where he would organize strikes and protests with his Black co-workers. In 1983 he was arrested for throwing a paint bomb at a strike-breaker’s car and was fired a year later.
Using his jewish privilege, Ignatiev somehow managed to get into the Harvard School of Education without a bachelor’s degree. He got his master’s in 1985, apparently after only a year of matriculation, and received his doctorate in the history of American civilization in 1994. Ignatiev became a professor of liberal arts at the Massachusetts College of Art and Design, where the Communist would indoctrinate countless students with his anti-White ideas until his retirement a few years ago.
Ignatiev died of an intestinal infarction on Saturday. Good riddance, Noel!
dead genocidal good riddance jew noel ignatiev