Showing posts from November, 2019
Show all

Another Confederate Monument Removed as Demographic Replacement Continue in America

https://dailyarchives.org/index.php/reports/2845-another-confederate-monument-removed-as-demographic-replacement-continue-in-america A Confederate monument that had stood in front of a North Carolina courthouse for 112 years was taken down overnight after months of debate and Jewish-led non-white protests. Crews used cranes early Wednesday to remove the monument -- a bronze statue of a Confederate soldier atop a marble pedestal -- from its spot outside the Chatham County courthouse in Pittsboro, roughly a 35-mile drive west of Raleigh. The county Board of Commissioners voted in August to remove the statue. That sparked a court challenge by the group that donated the statue in 1907, the Winnie Davis Chapter of the United Daughters of the Confederacy. A judge ruled this month that the group did not give "sufficient evidence" supporting the monument's continued presence in front of the courthouse, CNN affiliate WTVD reported. The statue and pedestal "will b
Post a Comment
Read more 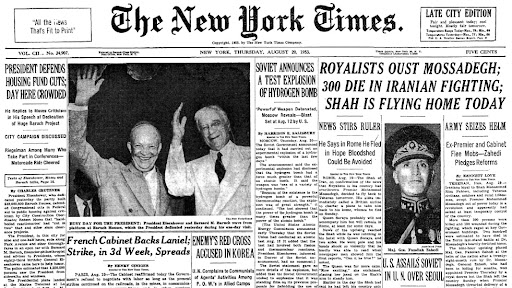 http://www.renegadetribune.com/the-new-york-times-long-history-of-endorsing-us-backed-coups/ By  Alan Macleod B olivian President Evo Morales was overthrown in a  U.S.-backed military coup d’état  earlier this month after Bolivian army generals appeared on television demanding his resignation. As Morales fled to Mexico, the army appointed right-wing Senator Jeanine Añez as his successor. Añez, a Christian conservative who has  described Bolivia’s indigenous majority as “satanic”, arrived at the presidential palace holding an oversized Bible, declaring  that Christianity was re-entering the government. She immediately  announced  she would “take all measures necessary” to “pacify” the indigenous resistance to her takeover. This included  pre-exonerating the country’s notorious security services  of all future crimes in their “re-establishment of order,” leading to  massacres of dozens of mostly indigenous people . The  New York Times , the United States’ most influential news
Post a Comment
Read more

https://dailyarchives.org/index.php/archives/22-mark-weber-the-legacy-of-rudolf-hess On the evening of May 10, 1941, the Deputy Führer of the Third Reich set out on a secret mission that was to be his last and most important. Under cover of darkness, Rudolf Hess took off in an unarmed Messerschmidt 110 fighter-bomber from an Augsburg airfield and headed across the North Sea toward Britain. His plan was to negotiate peace between Germany and Britain. Four hours later, after successfully evading British anti-aircraft fire and a pursuing Spitfire, Hess parachuted, for the first time in his life, and sprained his ankle landing in a Scottish farm field. An astonished farmer found the injured pilot and turned him over to the local Home Guard unit. [1] Winston Churchill promptly rejected Hess' peace  offer  and jailed him as a prisoner of war, even though he had arrived unarmed and of his own free will. Rudolf Hess, ambassador of peace, was to remain a prisoner until his deat
Post a Comment
Read more

Foreign Volunteers for the Waffen-SS were Highly Intelligent and Ambitious

https://dailyarchives.org/index.php/archives/57-foreign-volunteers-for-the-waffen-ss-were-highly-intelligent-and-ambitious-another-study-says Swiss, Swedish and Danish men who volunteered for the Waffen-SS were highly intelligent and ambitious individuals, another study says. In an article published in the journal Contemporary European History, Dr Martin Gutmann argues that men from the neutral countries of Scandinavia and Switzerland who offered their services “left for Germany with an active interest in contributing both physically and intellectually to the NS project”. Gutmann challenges ‘the myth of the volunteers’ – namely, that they were uneducated social ‘losers’ and deviants, drawn by naivety or greed. Instead, he argues, most were well-travelled, well-educated, and of a middle or upper-class upbringing. By examining documents detailing the lives of a number of volunteers, such as journals and school records, Gutmann concludes volunteers “were not weak followers, but
1 comment
Read more

https://dailyarchives.org/index.php/archives/2842-we-fought-on-the-wrong-side The following editorial raises a fundamental question regarding our contemporary situation and calls for a radical re-evaluation of postwar events in the Western world. ( New Order ) by Matt Koehl It has now been 50 years since the end of World War II. For many that conflict seems like so much ancient history. But the anniversary ceremonies and revelry of the military victors at this time remind us that there are those who will not soon let us forget. And so it is fair to ask: Why did we — the peoples of America, Canada, England, France, Australia, New Zealand and South Africa — go to war in the first place? Many explanations have been offered: It was to stop dictatorship and aggression, to preserve freedom and democracy, to save the British Empire, to save little countries, etc., etc. When the filter of simple truth is applied, however, everything boils down to a single issue: the pathologic
Post a Comment
Read more

Italy: “Miss Hitler” was Among the National Socialists Arrested for Trying to Establish a “New Nazi Party”

https://dailyarchives.org/index.php/reports/2843-italy-miss-hitler-was-among-the-national-socialists-arrested-for-trying-to-establish-a-new-nazi-party Zionist prosecutors in Sicily have announced 19 arrests, exposing a nationwide network of National Socialists. Police have uncovered weapons, explosives, and patriotic propaganda in a series of raids. Italian police have arrested at least 19 people in connection with an alleged "militant neo-Nazi ring", national media reported on Thursday. Although the investigation was based in Sicily, the suspects hail from all over the country. One of the arrested included a 26-year-old Milan resident who had been the winner of an online beauty competition Miss Hitler. She also spoke at an nationalist conference in Portugal last August that attempted to unite the National Socialist movements of Italy, Portugal, Spain, and France. During the operation — led by zionist prosecutors in Caltanissetta, Sicily, and dubbed
Post a Comment
Read more

- November 29, 2019
http://www.renegadetribune.com/fabricated-crisis-in-levittown-pa-jews-behind-forced-integration/ From  F_Zion  (edited) Levittown was a jewish creation and a test model for integrated American white communities. The majority of the land on which Levittown was built was purchased in 1951 by Levitt and Sons, a jewish family. Offering six models of cheaply built garbage houses that were built in a single day, the homes were moderately priced and required only a low down payment and were targeted to whites and GI’s and war veterans. Construction of Levittown began in February 1952. William J. Levitt, who is often credited as the creator of the modern American suburb, which focused on big box stores and left the small business owners with no option to compete with huge corporate retail models, destroying the old traditional European style societies, which focus on family and unity. Shortly after all homes were built and sold to mostly whites and several “white looking” jewish f
Post a Comment
Read more
More posts