Are we really supposed to believe a survey conducted by the World jewish Congress?
I hope this poll of 1,300 Germans is actually accurate, and actually, we would have to assume that Germans are under-reporting their own “anti-semitic” attitudes.
Here are the results: 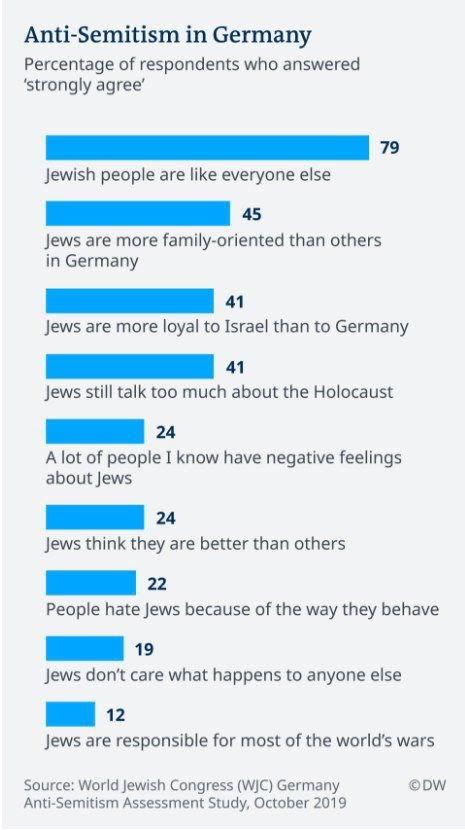 You can probably guess which of these numbers really pissed the jews off the most. I’m not sure why it’s not included in the graphic, but more than 20% of respondents said Jewish people have “too much power” over the economy, international financial markets and the media.
I will go through quickly and give my own thoughts on the poll.
jewish people are just like everyone else – No, they’re not. They actually have unique diseases that effect them almost exclusively. They are also, by their own beliefs, much different than the rest of us “goyim” and definitely more wealthy!
jews are more family-oriented – Yes, because they have taught everyone else to hate their families, as well as their entire people and culture.
jews are more loyal to Israel – Yes, jews are often accused of dual loyalty, but they only really have one loyalty, which is to the jewish people and the terrorist state of israel.
jews talk too much about the Holocaust – Yes, every single damn day, kvetching endlessly about fake atrocity propaganda from 3/4 of a century ago. It’s how they shut up their opposition, cast guilt upon their host countries, and impose their will.
A lot of people I know have negative opinions on jews – Yes, because of their behavior, not because of some irrational “disease” of anti-semitism.
jews think they are better than others – Yes, they call themselves the goddamn “chosen people” and consider the rest of us filthy cattle!
jews don’t care what happens to anyone else – Yes, did you see the jews in Halle, Germany singing and dancing after the German gunman shot 2 Germans outside their synagogue? I know the shooting was a PsyOp, but do you think they would have been celebrating if it was 2 jews who were shot? We are “goyim” to them!
jews are responsible for most of the world’s wars – Yes, this is undeniable. This statement does not even go as far as Mel Gibson, who claimed they are behind ALL of the world’s wars.
Now it would have been great to see more people in Germany answering these questions by jews about jews honestly and accurately, but the results still seem to have shaken the jews up a bit.
From the jewish press:

The WJC survey found that anti-Semitism is growing among the wealthy and well-educated. 18% of respondents with at least one university degree who make at least $111,300 per year agreed with anti-Semitic sentiments. Within this group, more than 25% believe Jewish people have too much power over world politics and the economy.
WJC President Ronald Lauder told Süddeutsche Zeitung that the state of anti-Semitism in Germany has reached a “crisis point,” cautioning: “We’ve seen what happens when ordinary people look away or remain silent.”

FYI, if you have not looked into WJC President Ronald Lauder, you probably should.
74 years antisemitic germans indoctrination poll still too