9 out of 10 US Jews worry about anti-Semitism, and most think it’s getting worse

Some nine out of 10 Jews in the United States believe anti-Semitism is a problem in the country, with widespread fear that it is on the rise, according to a recent survey by the American Jewish Committee. The survey is the largest and most comprehensive conducted among Jews on the topic of Jew-hatred in the US to date.
Thirty-eight percent of respondents to the AJC poll said anti-Semitism was a “very serious problem” and 50% said it was “somewhat of a problem” — adding up to 88%. Eighty-four percent said that anti-Semitism has increased over the last five years; 43% said that it increased a lot over that time span.
The results were consistent across age groups, religious denominations, and political affiliation, with 84% of ultra-Orthodox, 80% of Modern Orthodox, 91% of Conservative, 94% of Reform, 92% of Reconstructionist, and 87% of secular Jews saying that anti-Semitism is a very serious or somewhat of a problem in the US today.
It is being released just days before the first anniversary of the deadly shooting at Pittsburgh’s Tree of Life Synagogue, which claimed the lives of 11 people on October 27, 2018.The survey, which has a margin of error of 4.2%, polled 1,283 respondents of Jewish religion or background over the age of 18 via telephone between September 11 and October 6, 2019. 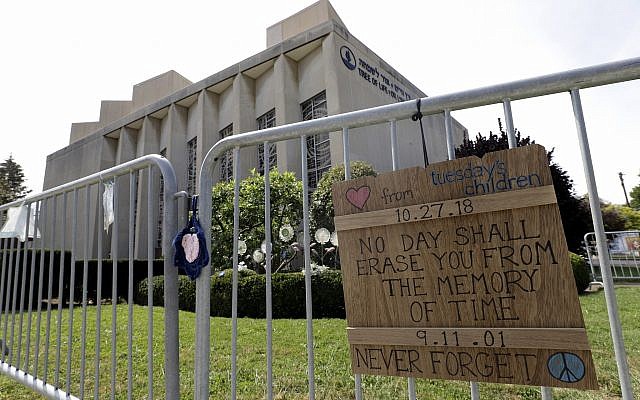 A sign hangs on a fence surrounding the Tree of Life synagogue in Pittsburgh on September 17, 2019, where 11 people were killed in a shooting on October, 27, 2018. (AP Photo/Gene J. Puskar)
“After the tragedies in Pittsburgh and Poway [California], coupled with increasing assaults on Jews in New York and elsewhere, as well as a more general sense that anti-Semitism is on the rise in politics, social media, universities, and elsewhere, we felt it was high time to survey American Jews on their perceptions of the issue,” AJC CEO David Harris told The Times of Israel. “It was the right call. The results show why.”
“The concern is deep and widespread. No such intensive survey of American Jews has been done before. Now, instead of just having feelings and instincts, we have solid facts and data for use by political leaders, law enforcement officials, Jewish community activists, and others,” he said.

A report released by the Anti-Defamation League this week said that the massacre at the Pittsburgh synagogue set off a chain of similar plots against Jews, with 12 white supremacists and two Islamic extremists being arrested for plotting, threatening, or carrying out anti-Semitic attacks in the US over the last year.
The ADL report also showed record levels of anti-Semitic incidents, with 780 known instances occurring in the first six months of 2019.
Thirty-one percent of Jews polled by the AJC said that they have refrained from wearing, carrying, or displaying things that may identify them as Jewish in public, and 25% have avoided certain locations, events, or situations out of concern for their safety or comfort as Jews. 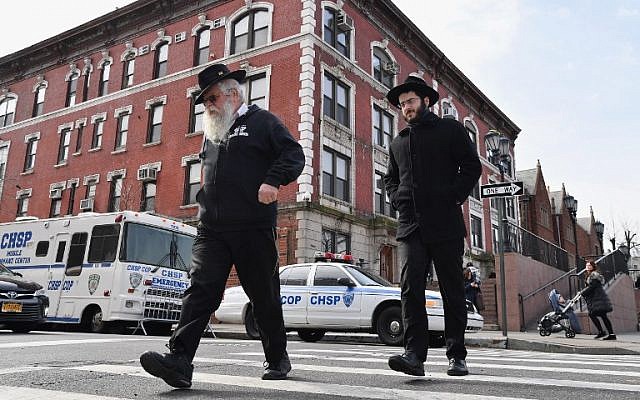 Orthodox Jewish men walk past a ‘Crown Heights Shmira Patrol’ security vehicles in the Brooklyn neighborhood of Crown Heights on February 27, 2019 in New York. (Photo by Angela Weiss / AFP)
A third of respondents said that Jewish institutions they are affiliated with have been the target of attacks, graffiti, or threats within the last five years. While they agree that law enforcement has provided an effective response, few American Jews targeted by anti-Semitism have turned to the police.
The far-right is seen as the biggest threat to US Jewry, with 89% of respondents concerned about far-right extremism and 49% calling it a “serious threat.” Sixty-four percent said that the extreme left is a threat, with 15% calling it serious, and 85% of respondents said that radical Islam poses a threat, with 27% saying it is serious.
9 out of 10 antisemitism getting worse u.s. jews worry