The conventional wisdom has always been that, while Democrats might be able to pull off impeachment, with Republicans standing firm in opposition, the counterargument was that that dynamic could change as 1) the extent of Donald Trump’s crimes emerged, and 2) Trump behaved in such ways that it would become increasingly difficult to defend him.
The first of those always seemed a stretch. Republicans know all about Trump’s crimes and likely more. The Republican leader in the House once famously said that Trump was on Moscow’s payroll, and it didn’t bother him one bit. The second seemed more fertile ground, as Trump is unable to handle pressure in any remotely graceful way. Nothing about him literally screaming PRESIDENTIAL HARRASSMENT on Twitter makes one think, “He’s got this.
And while it’s only several days into the impeachment inquiry, Trump is already losing his shit. Almost out of the gate, he began blaming others for his predicament. “What Trump and other aides are frustrated with, according to the sources, is that Mulvaney did not have a strategy for defending and explaining the contents of those documents as soon as they were publicly released.” So hilarious, because, first of all, Trump has never followed anyone else’s strategy on anything, always believing himself to be the superior thinker, strategizer, and plotter. And it’s not just Trump—no Republican wants Rudy Giuliani on the airwaves admitting to further crimes and dragging new people into the conspiracy, yet there he is.
That’s why there’s no one left in the room with much smarts. Trump has surrounded himself with the nutbags from the nihilistic Freedom Caucus, telling him how smart he is for releasing that call readout that will prove to the libtards how stupid they all are!
We should take a moment to savor that idiocy—Trump’s dwindling band of defenders spent the weekend trying to discredit the whistleblower, which, to their credit, none of the Sunday news show hosts left unchallenged. And of the handful of on-air defenders (Rep. Jim Jordan, Stephen Miller), none were as dumb as Lindsey Graham:

MARGARET BRENNAN: But the whistleblower complaint is matched by the call record in numerous ways. 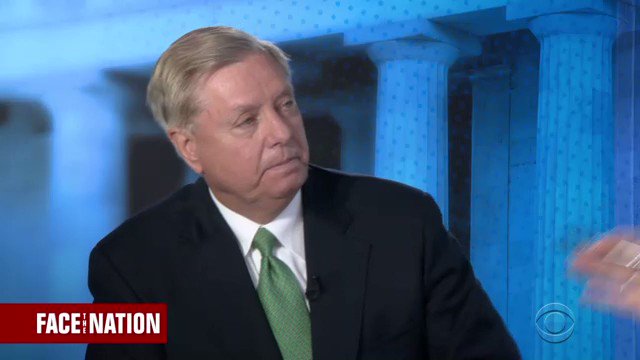 6,171 people are talking about this
So so so so so stupid. Unbearably stupid. So stupid, it’s a wonder Graham and the rest like him went on TV to spew this stupid, thereby proving their own rank stupidity.

Chris Murphy ✔@ChrisMurphyCT
I went to law school a while ago, but I seem to remember that defense lawyers who scream “Hearsay!” in court don’t usually get very far with the jury when their client has already signed a confession of guilt.
21.2K
7:11 AM - Sep 30, 2019
Twitter Ads info and privacy

4,156 people are talking about this

Or as our own Kelly Eleveld put it, “Imagine Trump shot someone dead on 5th Ave. Multiple eye witnesses told X and X reported it to authorities. [Republicans] don’t care about the murder. [They] want us to to focus on X. Who the heck cares about X?” The whistleblower is irrelevant. The whistleblower said evidence existed, Trump dug up the evidence as his idiot advisers applauded and released it to the world. We have all the incriminating evidence we need.
(Well, not all. We now know about the secret server used to stash all of Trump’s sellouts of our nation. The battle over the contents of that server will be epic.)
Really, the only reason anyone would debase themselves and defend Trump with such idiocy isn’t to convince people. They must know that screaming, “Don’t look at the evidence, look at the guy who called it in!” isn’t convincing anyone who isn’t already desperate to rationalize and normalize Trump’s behaviors. The only reason to defend it is to buck up the Trump faithful and impress the boss himself.
But even then, none of that presents an existential threat to Trump. His conduct may be indefensible, but Republicans will be hiding and feigning illiteracy this week, safely hiding back home during the congressional recess, pretending that they still haven’t read the whistleblower report. Moscow Mitch McConnell, in control of the Senate, would have no problem making a mockery of any “trial.” It’s not as if that crowd cares about norms or the Constitution or any other pesky impediment to their power.
The true danger to Trump is what started happening over the weekend: As his hold on sanity frayed, and the neverending Twitter screaming reached fevered levels, he began doing what we all expected him to do—make it increasingly difficult for his supports to stick by him. And while demanding that Rep. Adam Schiff, chair of the House Intelligence Committee, be arrested for treason was bad enough, it was his call for civil war in case he was ousted that showed the first crack.

Adam Kinzinger ✔@RepKinzinger
I have visited nations ravaged by civil war. @realDonaldTrump I have never imagined such a quote to be repeated by a President. This is beyond repugnant. https://twitter.com/realDonaldTrump/status/1178477539653771264 …
Donald J. Trump ✔@realDonaldTrump
Replying to @realDonaldTrump
....If the Democrats are successful in removing the President from office (which they will never be), it will cause a Civil War like fracture in this Nation from which our Country will never heal.” Pastor Robert Jeffress, @FoxNews
131K
8:59 PM - Sep 29, 2019
Twitter Ads info and privacy

47.2K people are talking about this

Kinzinger represents exurban Chicago, including DeKalb, where I was an undergrad. It is an R+8 Republican district, meaning it was eight points more Republican than the nation, a solidly red district. This isn’t a moderate Republican in a moderate district trying to survive next year’s elections by putting some distance between himself and Trump, but a real crack in Trump’s wall of Republican support. If people like Kinzinger are started to squirm, the danger to Trump is real. It’s truly existential.
Meanwhile, public opinion is moving in our direction on impeachment.
Trump will be seeing this, and his erratic behavior will only increase. He’s still facing serious legal threats on multiple fronts, and his tax returns are in real danger of being released to New York authorities if the courts don’t intervene. His allies are deserting him, and the ones he has left can’t muster up any sort of credible defense. Imagine if in a fit of anger he fires his “acting” chief of staff Mike Mulvaney, or the guy says, “The hell with this” and walks away? He is already short-staffed, his team unable to put together an impeachment “war room” because who the hell wants to sit there and defend Trump’s hourly outbursts and admissions of guilt?
His statements will only get more erratic, more difficult to defend. And rather than help his case, it’ll get more and more Republicans to defect. And at some point, in the months ahead, rather than go down with the ship, Republicans will have a real choice to make—wear Trump around their neck in 2020 and, even worse, risk the very health of our republic, or oust him via the 25th Amendment. Either choice may be electoral poison, but they built this: These are their consequences to bear.
P.S. Let’s not forget Lindsey Graham’s thoughts on impeachment, once upon another time when he was the House impeachment manager against Bill Clinton.
behavior donald trump erratic getting have no choice more and more oust him republicans