A lot of people have seen some of the ludicrous additions of “hate symbols” to the ADL’s list of verboten images, but I think this might be one of the most telling and ludicrous. 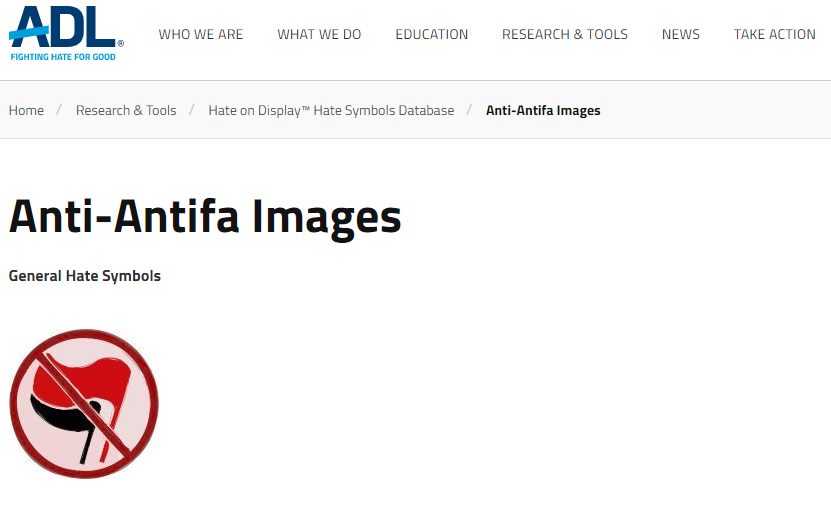 Although white supremacist animus is often thought of as being directed against religious, racial and ethnic minorities, a significant portion of their hateful rhetoric is directed against the political left, including both the mainstream and far left. […]
White supremacist anti-left (or sinistrophobic) symbology especially targets far left and anarchist activists who have dedicated themselves to actively opposing and exposing white supremacists. In the 1990s and 2000s, for example, white supremacists created images that targeted anti-racist skinheads known as SHARPS (for “Skinheads Against Racial Prejudice”), such as placing a red circle and diagonal bar, or a gun sight, on top of an image of a Trojan helmet (a common SHARP symbol).
More recently, white supremacists have created similar imagery directed against antifa (short for anti-fascist), the loosely-organized left-wing and anarchist anti-racist movement. White supremacists have coined the term “anti-antifa” for themselves. Some anti-antifa symbology simply re-imagines earlier anti-SHARP imagery, such as overlaying a red circle and diagonal bar on top of a common antifa symbols such as side-by-side red or red and black flags (derived from the logo of the 1930s German anti-fascist group Antifaschistische Aktion) or three downward-facing arrows (originating with German and Austrian Social Democrats opposing Nazism in the 1930s).
Other anti-antifa symbology perverts common antifa slogans and logos, such as changing “Good Night White Pride” to “Good Night Left Side.” Often anti-antifa symbology implicitly or explicitly promotes violence against left-wing activists.

Here are some of the other images featured on the ADL’s page.

Apparently the only stance regarding Antifa one can take in order to be a “good goy” in the eyes of our “chosen” rulers is to be supportive of the terrorist organization. Of course it would be “antisemitic” to oppose the Communist front, as it has been jewish from its earliest days. Most people likely do not even know how this organization came to be as a reaction to the “Nazis” of the past. The jews don’t want you to know the actual history of their organizations, such as how the ADL was created after B’nai B’rith member Leo Frank raped and murdered young Mary Phagan, was convicted in a court of law, but then had intervention from on high to get him out, and was utlimately lynched by a mob of angry “goyim.”
The ADL and their terrorist friends in Antifa pretend to have some kind of moral authority, but they are criminal foreign organizations dedicated to attacking Whites and defending jews.
ADL anti antifa hate symbols images lists